Seems like the Rackman is getting weary of hairy cowboys, rodeo shenanigans, and maybe even waxed up male-order 'brides'. He wrote somewhere that he craves a dose of good old fashioned Taliban action. So, filled with sympathy, I call this one-

The young corporal knew he'd been foolish; exploring the back alleys of some shit hole a stone's throw from rolling acres of blooming poppies. Rifle ready, he busted down a few doors, playing the macho soldier like he'd been trained up to be back at Pendleton. Well, next thing he knew the platoon was out of sight and the young corporal found himself surrounded by scowling dark-haired insurgents cut from the same bad ass mold but working for the other side. He knew he was out numbered and, more to the point, out gunned so, muttering a frustrated (and very scared) expletive, tossed his rifle on the ground and slowly raised his arms in the universal posture of submissive (if unwilling) surrender. The insurgents breathed a collective sigh of satisfaction and, roping his strong arms behind his back, manhandled the captive marine into the back of a pick up. Three hours later they arrived at another village that was nevertheless a dead ringer for the one where he'd been taken but miles and miles from the frightened soldier's buddies or any hope of rescue. He was roughly kicked from the back of the truck and cursed as his khaki blouse and tee were stripped off leaving him naked to the waist under the relentless glare of the sun. The insurgents then slapped a pair of old shackles on his wrists and chained him to the wall of a nearby house under minimal guard as the main group went in search of the local commander. The handsome young corporal soon attracted a crowd of curious locals who ogled his muscular torso, tweaking the pale hair on chest and belly and even unbuttoning his utility pants, fascinated by the lean perfection of the live trophy chained against the wall and, though he didn't understand a word they said, speculating on his probable fate with wide grins and animated gestures. 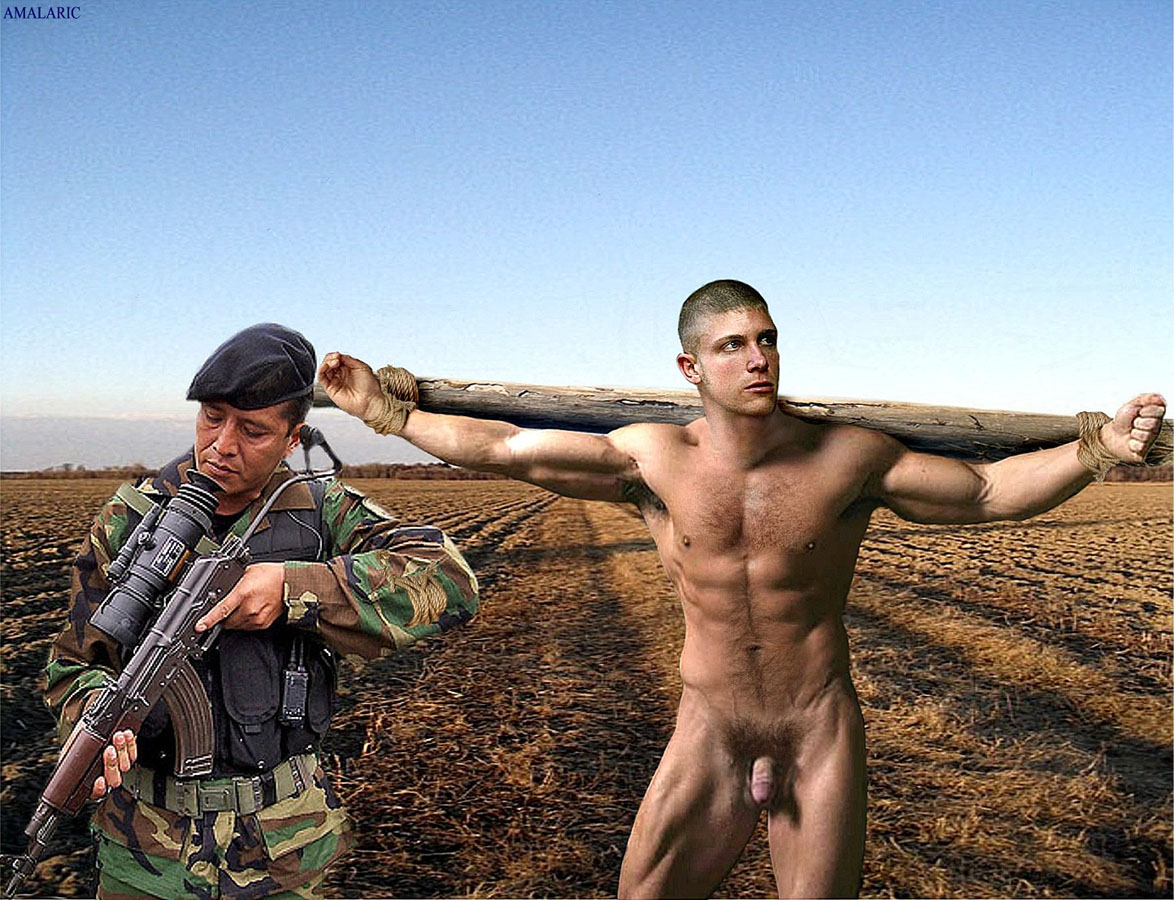 He swayed under the blistering sun for more than an hour, chained to the wall as bold members of the taunting crowd pawed his body at will, prodding the flexed muscles of chest and belly, laughing as the tall American cursed and squirmed, which caused the baggy unbuttoned utilities to sag ever lower on his narrow hips. Finally, a Russian-era jeep pulled up and the show was over as quickly as it had begun. The driver motioned to the remaining militia and the captive marine breathed a short-lived sigh of relief as he was unshackled and allowed to lower his aching arms. The respite was short, as he was hustled into the back of the jeep and, an hour or so later, found himself standing in the stone courtyard of the militia commander's fortified compound. 'Strip off the rest of your uniform!!' The terse command, barked in heavily accented English, was clear and left no room for contradiction. The corporal paused, playing horrific scenarios gleaned from training sessions back home on the screen of his churning imagination, and tried to disguise the shaking of his hands as he bent to unlace his boots, pulling them off along with his socks before shucking his trousers to the ground where they were carried away by a grinning insurgent. He stood at weary attention, stripped to his briefs, as leering insurgents examined their prize, running appreciative hands over the tanned planes of his naked chest, fascinated by the golden hair dusting his torso, tracing the virile line to the dipping elastic of his jockeys looking sideways at the grim commander, afraid to explore further. He was questioned for what seemed an eternity, running hot sweat of fear and weariness, passive muscles aching with stationary stress and always battling the fear of what could come next. 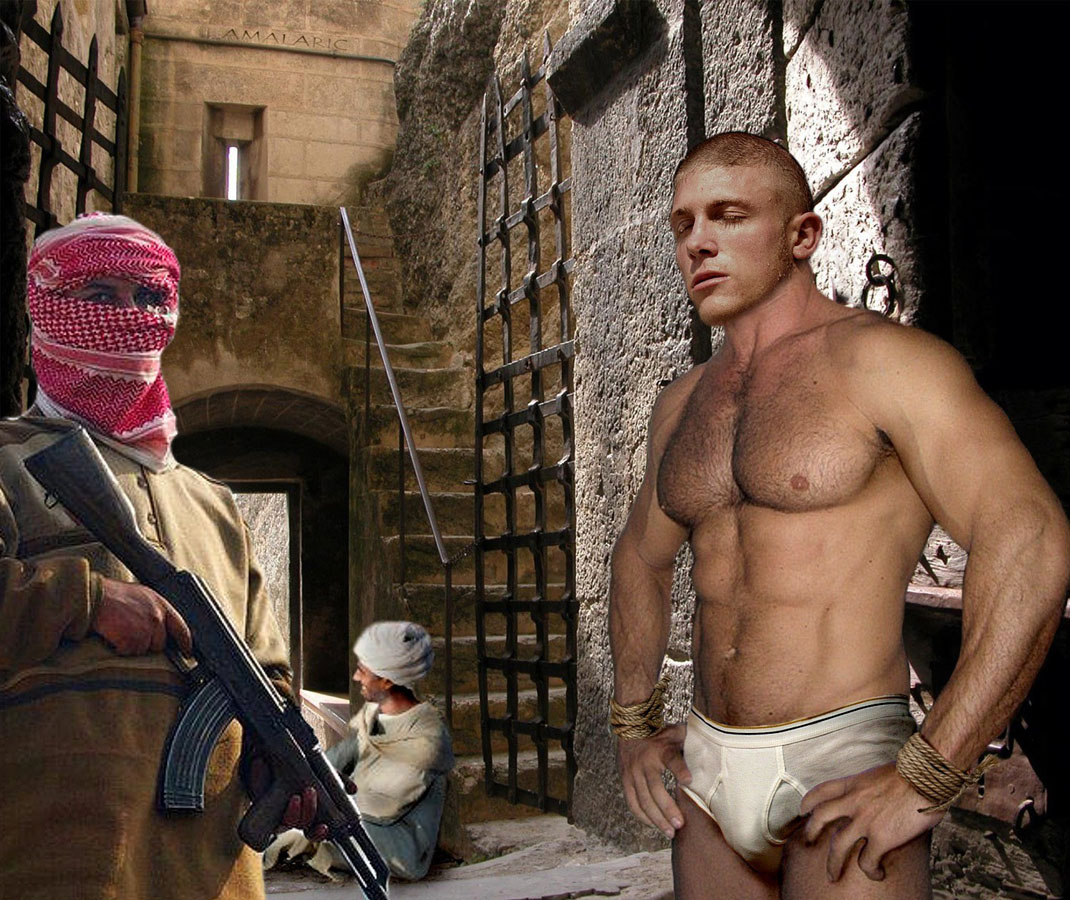 The corporal would have done his commanding officers proud- he revealed almost nothing during the course of the long initial interrogation. In truth, he didn't know that much in the first place and realized later that his captors probably realized that as well since the torture he was made to subsequently endure seemed more for sadistic sport than the breaking of his will. After an interval left standing, stripped to his shorts and longing irrationally for his uniform- not from shame, but because somehow it provided an identity- he was re-shackled and his arms hoisted high overhead attached to linked chain hanging from a projecting lintel that seemed made of the purpose of immobilized flogging. Whatever the case, the handsome corporal was finally stripped naked (as he knew he eventually would be) and made to dance under the lash to the great amusement of the gathered insurgents. He put on a good show; lithe body of honed muscle, straining against the uplifting chains, twisting against the searing pain of the expertly wielded whip. The snap of hungry leather against taut muscle was punctuated by ragged breaths of desperation and low grunts of agony that in no way diminished his dignity or cast any aspersion of weakness on the Corps. The corporal took his flogging like a man and, though in his deepening delirium he failed to notice or appreciate, the gathered insurgents nodded solemn approval to one another, narrowing eyes the color of midnight as they tested the mettle of a respected, even noble, enemy. 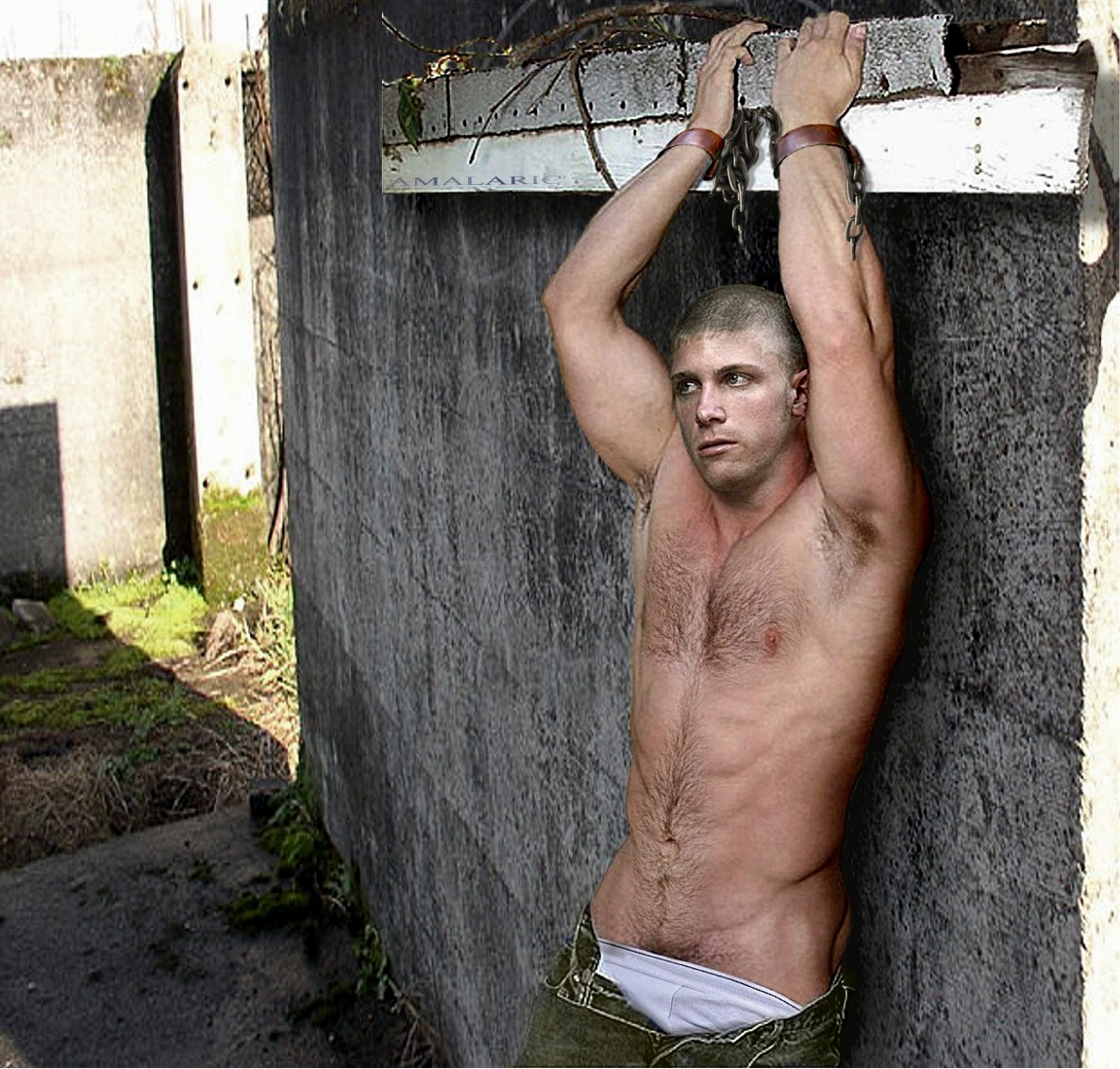 Weeks passed and the young soldier was eventually made to endure far more than a whipping. He held up fairly well as the physical ordeal, aided by the creative imagination of the camp commander, reached multiple crescendos surpassing the horror stories bandied about back at Pendleton. If, sometimes, the shrieks of agony could be heard echoing from this back room or that and into the narrow streets of the forgotten village, well, that too was no aspersion on the captive or his bruised manhood- anyone would have done the same and probably a whole lot sooner and a much louder. Throughout (well, almost), the soldier refused to beg and he saved his tears for late in the evening when, finally alone in his cell, he would hug his naked torso and wonder what his mom and dad were doing or whether he would ever see his girlfriend again.

The day ground to the half way point in an open expanse of half plowed field. The tall POW stood like a captive god- pumped muscle of hard labor and the golden bloom of his twenty three years stark naked in the glare- with his flexed arms bound outstretched to the heavy yoke riding broad shoulders. The guard smiled, admiring the sight of the handsome young soldier, running his eyes up and down the captive's muscular body glistening with sweat in the merciless light. 'Break time's over, dog! There's still half the field to plow and five hours of light left.' He ran his hand appreciatively over the corporal's heaving torso before casually fondling his balls. Five minutes later the strapping young marine was back in harness and grunted as he leaned against the drag of the plow. 'Put your back into it!!' The short whip bit into the sunburned skin of his back and the marine put one foot impossibly before the other, fighting a wave of weariness that threatened to send him to his knees. 'That's right...move it. Got to earn your keep...' 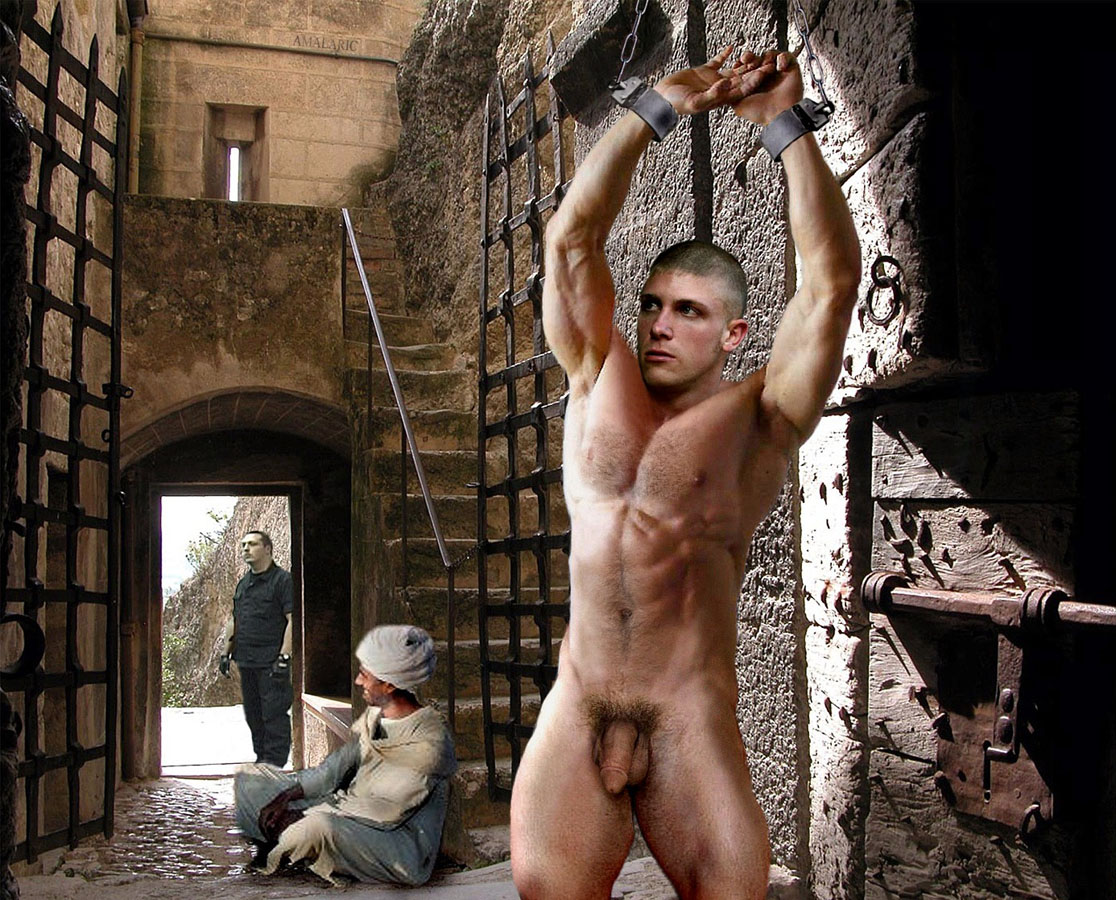