He cost a fortune but Ahmad didn't care. Standing tall in the cool breeze of a coastal village, freshly taken from some nameless European ship transporting troops from one endless infidel battle to another...it didn't matter, the captive's life (in that respect) was over. Ahmad wondered if the handsome blond soldier realized that yet- head still unbowed, dressed in his slightly tattered uniform on the busy quay of the tiny North African port. The trader, suddenly in a pensive mood, wondered if the young man had a name, perhaps some brothers not unlike himself in the fabled lands of green grass and trees across the water. Shaking his head, he pushed all distractions from a besotted mind. Those things mattered little, but of one thing he was certain- the handsome infidel had to be purchased...at any price.

Haggling was fierce and Ahmad's purse was notably lighter as he led his bemused merchandise from the quay. Of course, he had insisted on a cursory examination of the 'goods' and the young man's linen shirt gaped open to his navel revealing a sculpted torso of rippling, smooth muscle-chest dusted with fine gold hair that caught the desert light, matched by parallel glints on forearms and the narrow blond river running into the waistband of his baggy trousers. Deep gray eyes burned with anger and, perhaps, shame as he was groped and tested and that made Ahmad smile. The buck clearly had no idea of what else might be in store.

The tiny caravan headed inland veering east through tall shifting dunes of burnished sand. Ahmad sat, like a king, astride his camel; eyes riveted on the broad back and scantily clad narrow muscled ass of the plodding young slave tethered, like a dog to its leash, by a long rope anchored to the pommel of his saddle. His intention was to deal the strapping prize in the bustling slave market at Algiers but, as the days rolled by, the trader's resolve slowly weakened. Trying to resist the crazy impulse bubbling irresistably from the hot depths of riveted vision, he reminded himself that he had to make a living and this one would fetch a fine profit...yet, Ahmad was somehow loath to contemplate that possibility.

The turning point came late one afternoon as the caravan staggered to a halt near a scrubby stand of desert grass and tiny spring of water. The slave was allowed to drink his fill and Ahmad watched, sitting languidly in the shadow of his resting camel, as the handsome soldier moved, marveling at his muscular grace and tones of gold on gold as sunbleached hair and tanned skin gave him the aspect of a god in the mellow light of the waning sun. 'Come over here, boy.' The slave reluctantly obeyed, biting back simmering anger, struggling with the strange cadence of a new language, and shuffled forward to stand before his master. Of course, he was shirtless and had been for some days- all the better to bronze his northern skin and enhance the sting of the discipline whip liberally wielded against broad shoulders. 'Strip off your trousers.' Ahmad's heart pounded with a timeless kind of ecstasy as the tall soldier reluctantly complied and stood naked in all of his muscular glory; hard proportion of broad, deep chest, smooth back, narrow hips, high jutting ass and thick, hairy manhood swinging between slightly spread legs, all on view for the trader's hot pleasure. The buck was ordered to pose- 'Turn around, nice and slow...arms up, hands behind your head, that's right! Spread your legs, lad, so I can see what rides between them a little better...ahhhhh!' It was then that Ahmad surrendered. Oh, he would continue along the road to Algiers, and somehow gather something to sell in the fabled souq...but not this one, no!

A thousand sweet scenarios swirled through his suddenly brightening mind. Fingers itching, he nevertheless caressed the chiseled jaw and deeply shamed gaze of his golden captive for a while with hungry eyes. Finally, unable to stand it any longer he gasped a gutteral command that caused the wary young slave's heart to race with a potent mixture of fear and frantic denial, 'Come closer, boy. The time has come for your training to begin.' 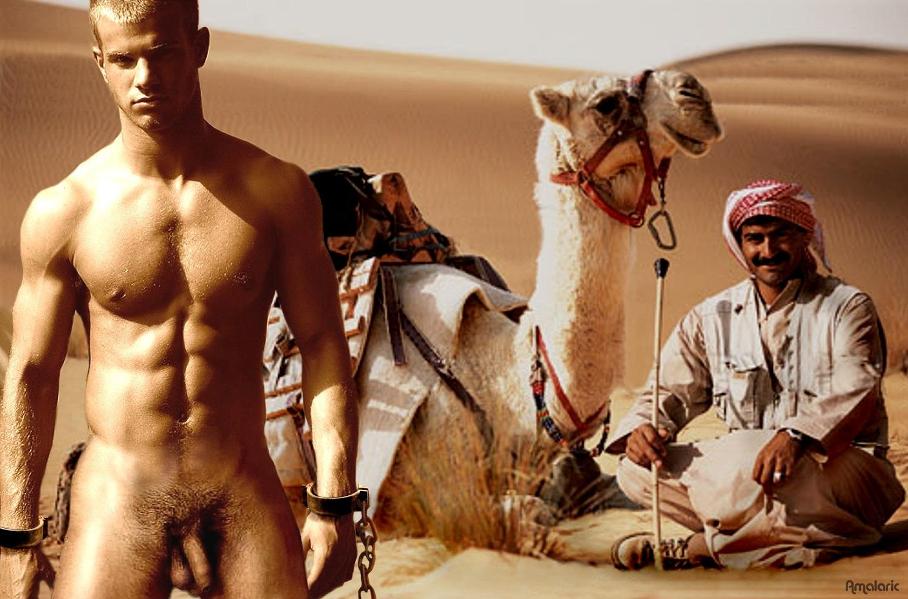