The Telemachus Story Archive
In From The Fields
By Amalaric (Illustrated by Amalaric)
Email: Amalaric

In From the Fields

The longer days of lush green-filtered sunlight that came with summer were hard on the ranch slaves, though there were some consolations. The warmth was welcome, at least in the mornings and evenings, as naked bucks milled in the barracks before and after hours of hard labor. Relaxed in the waxing or waning light, the balmy air was comforting after the cold season huddling around the wood stove, flesh often pressed against flesh from pure desperation. Master was a hard man and most of his boys went naked- what’s a strapping young stud need clothes for? No reason for it in the summer and winter just serves to toughen them up. Unless, of course, the labor required some ‘support’ (no sense in damaging the goods), in which case sturdy jock straps were provided. It was true, summer came with a measure of consolation…but, damn, the work was hard.

The bucks were rousted from the pallets where they slept, two by two, and unshackled at half past four in the morning and the light was already pearly at that hour on the eastern horizon. A healthy, if tasteless, breakfast was provided in the yard heavy on carbs, protein, and fiber. Water buckets and other supplies were loaded on to the carts as stomping young slaves listed on the rota were led to harness. The others followed, glad that it wasn’t their turn to pull the heavy carts, along the dirt track a half a mile or so to the broad expanse of fertile land the master was farming that year. By half past five the work day was in full swing and would remain so for fourteen hours until the sun tired of ogling the toiling muscles far below and headed west to jack off in some cosmic hideaway.

Life was tough for a field slave and the planting season came with its own special agony. The work was backbreaking. Harnessed to a plow being the worst, but lifting and breaking boulders was almost as bad, and even hefting a shovel or swinging a hoe (though those were coveted jobs considering everything) eventually made the hardest muscles burn with a leaden kind of fire. The back breaking routines were broken by spells of lighter work pulling weeds or a hundred other things required by the demanding land… and that was a relief of sorts. All done under the blazing sun glistening with healthy sweat, sunburned cocks and balls swinging uncaring in the humid air, mighty chests panting with exertion as muscles bulged under taut skin toned golden in the bright light. The work was hard, but the foremen were harder. There were always at least a few of them to supervise things and make sure the bucks kept busy and, if some got spirited and made trouble, to…take care of things. Each foreman boasted a long bull whip- a mark of office and clearly a source of pride and joy- and they all seemed to relish their use. The laboring slaves were goaded to fresh effort throughout the long day by well-placed strokes on backs, buttocks and upper thighs and, for special cases, the old whipping tree loomed off to the side in a fallow field where even now, Big Joe, a handsome twenty five year old recently purchased from one of the farms down the road, hung semi-conscious in a muddy puddle of his own piss. Strung up against the tree with his hairy chest and abs crisscrossed by seeping welts and a bloody nick taken from the raw head of his cock (man you should have heard him scream- and the six and a half foot, two hundred and twenty pound stud had begged like a woman and cried like a baby when that happened…), he’d endure another set in a few hours and the last one right before quitting time. Big Joe was fucked…big time, and the lesson wasn’t lost on the rest of the men blinking hot sweat out of their eyes as they passed him, groaning against the splintery wood of the whipping tree.

Quitting time was sheer relief. Chow, the chance to rest, joke around a bit and tell some stories sitting on the trestle benches in and around the barracks- life almost seemed like living for those few precious hours before ‘lights out’ (though the sky wasn’t quite dark) when the pansy house slaves would oversee the shackling of field slaves to their pallets until another dawn and another day under the hot sun. 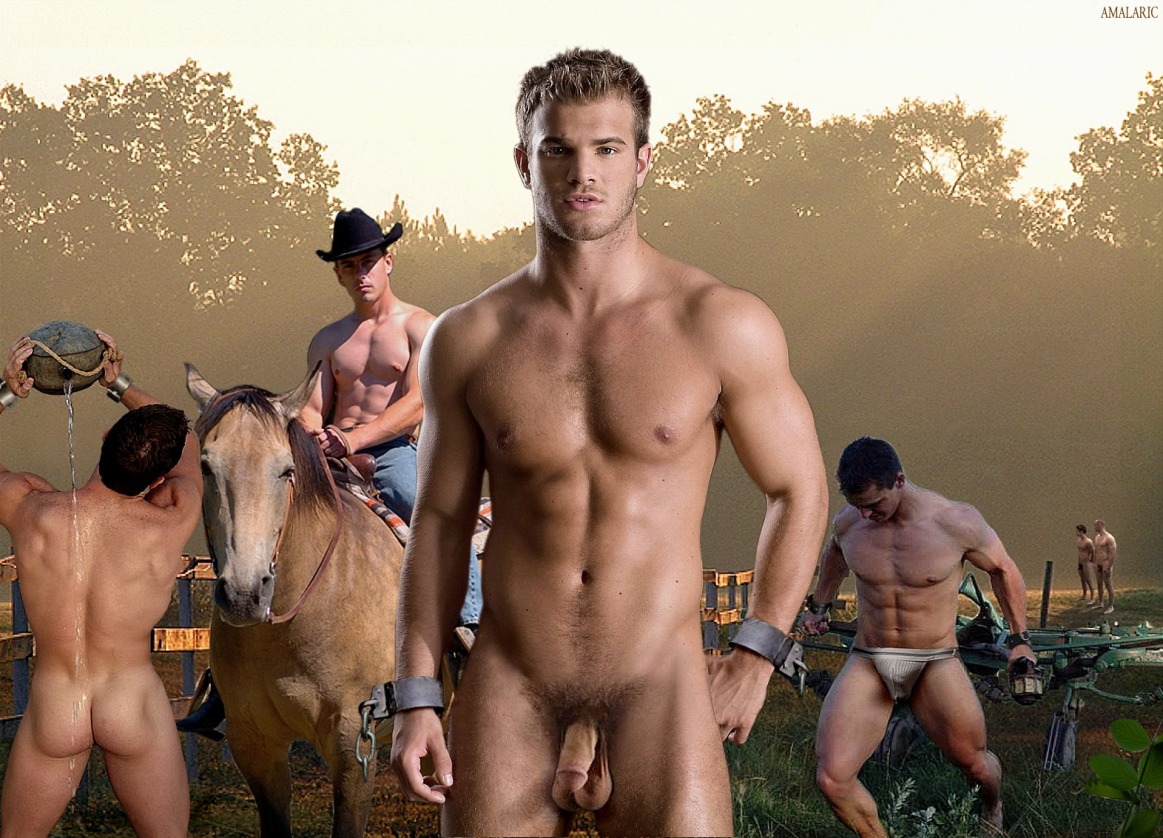 2. Summoned by the Foreman

Jim finished his first spring and then the summer working hard on the master's land. Twenty years old and in his prime, he was spirited and got up to the usual minor infractions on the odd ocassion, but nothing so serious that it warranted a visit to the whipping tree. His broad, golden back would flinch under the fast sting of quirt, strap or light lash, and that more or less sufficed to keep the tall buck in line. Jim had been trained well on the stud farm where he was brought up before being delivered to the auction where the old man had purchased him for a small fortune almost a year ago. Since then, the investment seemed worth it- the big twenty year old was a strong buck with a lot of stamina and held his own out in the fields, hitched to the plow, digging trenches, harvest work...whatever he was told to do. And Jim's muscles just got impossibly harder as his strong naked limbs tanned under the bright sun.

Night times the slaves were chained up after a short period of recreation and feeding to pallets on the floor of the quarters out back. Usually two by two or even three, sometimes alone, they were forbidden, under threat of dire consequences, to indulge in any horseplay- either with each other or alone with a calloused right hand. Randy buck slaves worked harder and, besides, they were sometimes sent out to stud and the master reckoned that a boy's juice was his property and shouldn't be wasted. Infractions were punished severely and multiple slips could have disastrous consequences. Everyone remembered Billy, the good looking green-eyed bull stud that thought he was God's gift to every slave wench in the county, caught handling himself once too often. Poor Billy was taken out into the yard the next day and strung up special- legs spread as wide as they would go with his arms pinioned straight up in the air pyramid-style, hollering some gibberish like he was sorry and it wouldn't happen again. The old man himself had grasped the straight edge and removed the source of Billy's temptation before the captive audience of terrified spectators shackeled in place against the far wall of the barn. Jim would never forget Billy's shrieks, or the look in his beautiful green eyes, like a spent sunset, in the weeks that followed.

Evening again but Jim couldn't get to sleep. His hard, naked body thrashed; twisting and turning against the rough planks of the pallet...thinking of the looks the foreman had been tossing his way all afternoon. Jim was no fool and knew what the leering glances meant and, gritting his teeth, he also understood that the master approved- allowing the foremen their way now and then as a sort of perk for service well rendered. The grate of the rusty lock and low groan of the door swinging open came as both a surprise and no surprise at all.

'Get up, boy.' Jingling keys released him from the pallet. 'Damn! Been watching you but I guess you know that?' 'Yes...sir,' mumbled in a deep baritone as the buck stood at attention, hands hanging loosely against pale hips, shoulders squared, bare chest thrust out and belly flat as a washboard. His head was bowed, eyes averted, legs slightly spread...as he had been trained to do in the presence of master, foreman, or guest. 'Lets go, boy. You and me gonna spend some time together,' the foreman laughed, 'and I want to show you some of my, ah, special toys.' Jim shambled into the yellow light of the corridor shaking with impotent rage as the foreman roamed the muscled contours of his body, lingering just where the naked slave expected, choking back his panic all the while. The slap of the crop on his ass set the buck moving- out into the shadowy yard and over to a secluded shack where the forman had left a light burning in the window. Jim stumbled forward, ass clenched, low swinging balls prickling with dread; his tensed muscles a ridged lightshow under the pale moon. It would be a long time before the dawn. 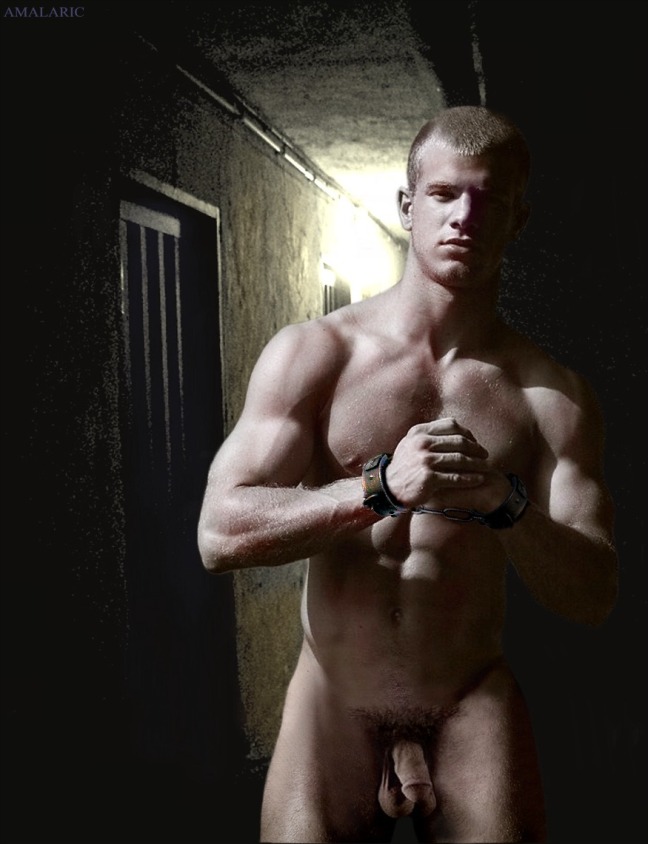