Deep in the tropical wasteland...it doesn't matter which continent; maybe Africa or the inky green tangle where tigers prowl in Asia or the fearsome jaguar in South America, a wary group of soldiers penetrates the interior. Who are they and why would they attempt a mission so dangerous? Let's assume they are the 'good guys'- chasing insurgents or propping up some tin pot dictator loaded with banana dollars who, nevertheless, serves the national interest. Then again, their mission might be more appropriate to the shadows- mercenaries brought to settle a feud where the stakes are incredibly high, perhaps modern day Robin Hoods on the look out for a sack or two of blood diamonds. Whatever the case, each is young, strong, blazing with courage and- though he would deny it- feels as if he could live forever.

The day, if you could call it that under the leafy canopy of perpetual twilight, began as many others then went horribly wrong. Jimmy Fordham curses himself, pinned to the moldy wall; shirt spread wide and trousers hiked low, he thought he was a 'leader of men' and supposes that may still be true...but he led them into a trap. Bobby Corvino hunches on his knees, inches from the captain's crotch, coming further undone by the second as their captors' laughing command registers in his very straight brain. 'Ah well', thinks the captain, 'soldiers (even the bad guys) have to have their fun. Me and Bobby will live to laugh about this someday,' but he knows, deep down, that may not be true. Whatever the case, Jimmy is far more worried about the fate of Lee Smithson, tensed in defensive posture, knowing his bluster is all a sham, with wrists shackled and the chains firmly secured to bolts in the floor. He was the last to strip off his shirt, loitering a little after the terse command, even to the point where the rest of his bros (except the captain) had got themselves stark naked- Bobby on his knees, with Luke and Harry strung up and squirming, dicks and balls swinging suggestively in the humid air and the cold sweat of fear falling like rain on the concrete floor.

Lee finally got his buttons undone and, turning, tossed the shirt, ripped from shackled wrists, in a corner. He shrugged, reaching for the brass buckle of the military belt circling his narrow waist and paused, momentarily perplexed at the wide stare of the big bastard tricked out in khaki and the latest weaponry straight off a Chinese assembly line. Following the other man's hungry gaze he remembered the tattoo on his back- centered squarely on a tan background of smooth, glistening muscle; the emblem of the Corps and a treasured memento of time spent among the best of the best. Lee Smithson's heart hammered a sickening challenge, massed biceps straining against the chain that bound him, as he realized that mementos could be stolen. The grating sound of an unsheathed knife and the covetous glint in the irregular's eyes confirmed his fears- every soldier lusted for some battle trophy and the tattoo that graced Lee's strong back would look mightily impressive stitched to a rucksack or piece of clothing. Bobby could damn well come undone but he would, eventually, do what he was ordered to do, and Luke and Harry would wait, like handsome, well proportioned meat dangling patiently in a spider's web of rough hemp or chain...but for now the coveted emblem of the far away Corps would center an uneven battle in the fly buzzed confines of the ruined compound, where the lost patrol made its final stand. 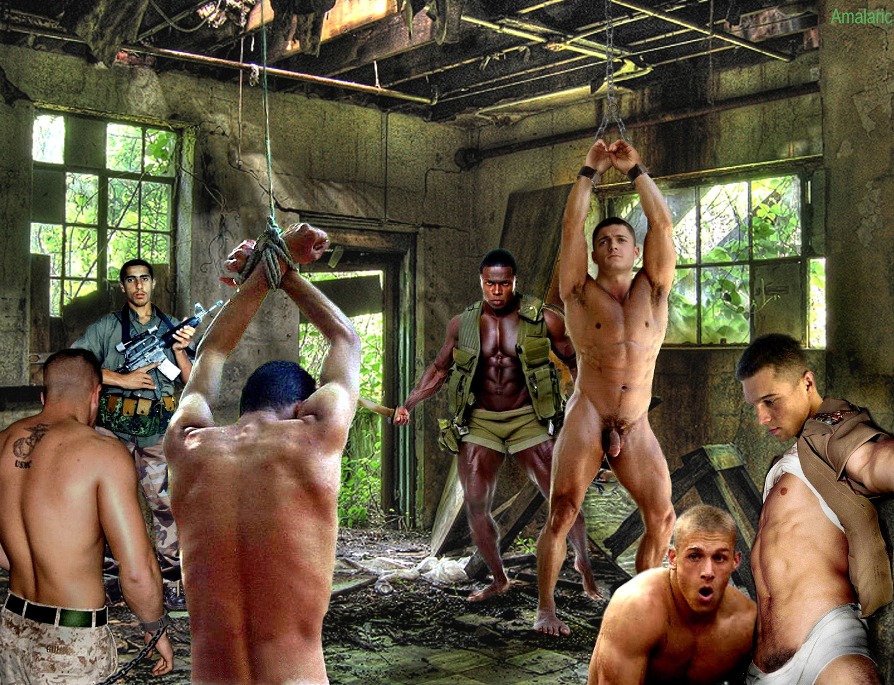