Long ago, when forests covered much of Europe and the mystery of rootless mistletoe growing in the tall oaks seemed spawned from heaven, people understood that the king and the land were one. He was the Summer King and, in his youthful strength and virility, assured the fecundity of the green season furrows; gentle rain, golden sun and ears of wheat full- like his testicles- with life-giving grain.

The Summer King was chosen from among the strongest, most handsome men- with flaxen hair and tanned skin the color of a ripe field. His rule was just and filled with the energy of youth.

Until the arrival of a morning long foreseen and secretly appointed, always after the harvest when the land was weary and needed his aid. The young king was awakened at dawn in his chamber and he knew, by the white-robed druid's nod, that the time had come for the tapping of his power. Though his heart hammered, he submitted with a clear eye and head held high as his hands were bound before him. Led in procession to a sacred clearing he was ceremonially stripped of all but his crown and bound naked to the Great Oak. His seed was collected in a sliver chalice, measuring his potency by loud spurts against the rim, while a jester cavorted- ritually reminiscent of the eternal balance of solemnity and levity; of the hard weight of manly responsibility and the carelessness of children basking in his protection. The Summer King tried, but couldn't smile. The occasion was too great and his heart, despite his resolve, was heavy...even fearful.

Some women found their way to the clearing and, gazing at the young, naked king, lost themselves in grief. They were warned away by the drawn sword of an angry thane.

Another sword snicked from its ritual black scabbard as the druid waited, impassive, for what must be. The Summer King lowered sky blue eyes and offered his blood to the thirsty furrows. 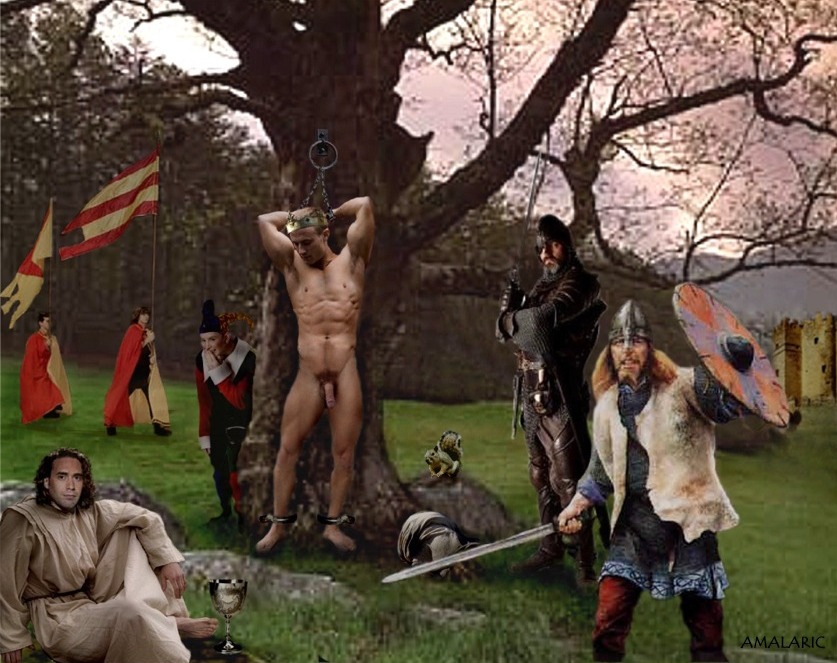