The sale was concluded in a kind of breathless excitement; slo-mo and flash strobe somehow melded into a single magic moment when the wealthy connoisseur decided with a fateful toss of his crew cut head and almost imperceptible shrug of Armani clad shoulders to take both of the bucks stripped for his perusal in the showroom. The leather-bound check book opened and closed with tasteful finality and the two strapping male slaves were his at last…though, in reality, it had been less than an hour since they were brought, shuffling, into his presence and ordered to strip naked for the favoured client’s hopeful examination.

‘Sir, you are entitled to some extras if you wish…’ The obsequious clerk roused the proud new slave owner’s attention with his oily tones. ‘What do you mean?’ ‘Well…’ the clerk somehow managed an impossible combination of arrogant sang-froid and sensuous invitation, ‘…many clients avail themselves of our post-sale services as they, ah, desire a certain degree of customization and (he sniffed) personalization. Intrigued, the already-satisfied patron arched an eyebrow of guarded assent and was handed what can only be described as a cross between a menu and a sales brochure.

‘Very good, sir. Excellent choices and, while we visit the facilities…you are a first time owner, yes??- our experts will be happy to offer some instruction in creative discipline.’ The proud owner beamed as the two young bucks were led from the sales floor to another, more shadowy, part of the premises. Once there, the smirking clerk arbitrarily selected one of the bucks, slightly smaller than the other; a wiry, muscular young blond just past his twenty second birthday, ordering him to shed the crisp cotton jockey shorts so recently shrugged over his exposed manhood as the sale was concluded back in the showroom. The skittish buck was led to an X-frame and bound securely. ‘First, we will brand him (subtly) with your initials, sir…as requested. Are you sure you don’t want him gelded? The service is free and sometimes desirable…ah well.’ The newly purchased slave shrieked his agony as the brand was applied. ‘Now…watch as our technician demonstrates the quality of our recently developed nylon whip…’

Throughout, the other buck- taller, a little more fully developed, and a year and a half older- waited, still clad in his scanty jockeys, head averted in mounting terror as he stood, shackled passively, trying to control muscles shaking with anticipation…. 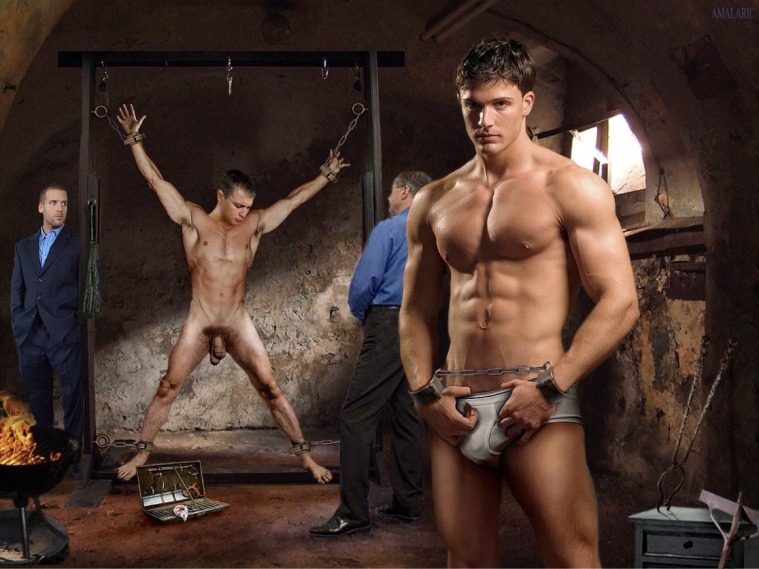