The dusk of All Hallow’s Eve was only an hour or so away and the tall young field hand knew better but, ignoring nagging instinct and the lore of his village, lingered a while among the furrows as the sun plummeted toward the distant blackening hills. His problem was actually a delight; it had been a bumper year and the glint of coin flashed in his mind as he took in the last of the harvest, counting his share after the bastards up at the castle had theirs, frantically racing ever frostier nights…and, speaking of the night… He looked up, squinting unnecessarily at an orange ball flattening itself against the jagged horizon and knew a frisson of real fear. Stifling a rush of reasoned anxiety, he threw down his shears, hitched the belt tighter around his narrow waist and, hastily retrieving a few personal items, hurried toward the road. His village was a full three miles away and, all thought of silver banished from his mind; the muscular farmer began to jog, wishing he could make himself invisible or, better yet, cause the sun to somehow stand still.

It was All Hallow’s Eve and Igor cut a strange figure, gliding through the shadowy bracken with a feral sort of grace at odds with his misshapen, lumbering appearance. Well, his heart was dancing. Always one to carry out tasks for the masters up at the castle, his life was often onerous as prosaic duty (and blows for ineptitude) made up his lot in life…but not tonight! Igor, for this one evening, was in his element; a free spirit of the dark variety and his duty, for a welcome change, was pure delight. He spied the young buck from a reasonable distance, alone on the wide road, jogging doggedly toward the candle-lit safety of his home, perhaps the relieved embrace of a frightened woman? Who knew or cared. Igor owned the night, lord of a handful of special hours; witching hours…and his masters’ commands, for a change, coincided with his own desire. He cut a diagonal along narrow paths clearly visible to a cat’s eye and loomed from the shadows in front of the terrified young farmer, cutting him off in his tracks. The other man- young and in his prime- could have overpowered the shambling freak, or merely sprinted by, leaving him in leering disappointment, but this was a special night and there was magic in the air. ‘Halt!’ The farmer shook his great head of burnished gold hair, heart hammering like a roebuck dazzled by torch light, and stood shuffling before the castle’s minion, all confusion in loose limbed paralysis, but his mind remained clear enough. Please! I have a family…friends…a life!! Futile pleading in clear blue eyes shining, now, in starlight moved Igor in a powerful way and he rubbed his crotch with anticipation as starved hope fled and the light dimmed in the handsome field hand’s lowered gaze.

Bound by invisible strands of potency conjured on this night, of all nights, the doomed victim walked unfettered away from the road and into the forest with Igor grinning at his side. It seemed like hours, or a very few minutes, trudging along hidden trails until, at last, a clearing held the frightened forest growth at bay, dominated nevertheless, by a tall, strangely supple, leafless gnarled tree. Though he had never dared come here, the terrified man knew this spot as all in his village did- he stood before the cursed oak, watered (they said) with the urine of witches and made for suffering. Igor exhaled a deep sigh and reached with trembling hands for the farmer’s earth-stained cotton shirt, stripping it slowly from his passive body as the victim clenched impotent fists, willing (and failing to find) the strength to lash out; standing instead like a dumb animal led to slaughter. His leather belt followed and Igor stared with hot satisfaction as the man’s breeches sagged around his hips revealing smooth lines of masculine muscle; ruddy skin pale in the moonlight, dark blond, sweat-soaked hair dusting chest and belly reflecting the cold gleam of uncaring stars…but there were preparations to order and first among them was the conjuring of a brighter, wilder, very different kind of light. The groaning young buck, well suited to hard work, was kept busy, goaded by the slash of a hastily cut switch against his broad naked back, piling wood from the surrounding forest higher…and higher in the center of the clearing until, satisfied at last, Igor struck a flint and a mighty bonfire licked to life.

Ah!!! Much better! He stared with unabashed appreciation at the beautiful man, panting from fear and exertion, stripped to the waist and bound by unbreakable spells- glowing now in full shamed beauty floodlit by the glare of the fire. Testing the man’s hard bicep, Igor smiled nervously, fantasizing with mixed pleasure and trepidation about what the buck could do if he were unfettered. Well, spells would suffice, but there were other, more prosaic methods and, besides, a proper display was necessary for the commencement of the festivities. He grasped the blond victim’s wrist and bound it with manacle and chain, hoisting it high against the undead tree until he dangled backlit by the glare of the now-raging fire. The field hand groaned, twisting already against the discomfort, a fresh sense of vulnerability washing over him as his breeches sagged lower and Igor, anxious to reinforce the lesson, plunged a hungry hand inside the gaping waistband, testing the victim's manhood. ‘You’ll do,’ he growled and then, considering, glanced up at the moon, measuring the time. ‘The masters will soon be here,’ he said and the tall stud twirling against the chain thought he detected a note of wistful regret in his tormentor’s voice. There was a short pause of wordless expectation as the confused field hand waited on the unknown, dreading it more than he had anything in his short life, but the reverie was short lived. Igor looked up and smiled. ‘We have time…some time…just me and you.’ And the look on the hulking minion’s broad face made the blood run impossibly hot and cold along the racing pulse of the buck’s long body. He screwed his eyes shut and shuddered as Igor reached for the laces of his drooping breeches. 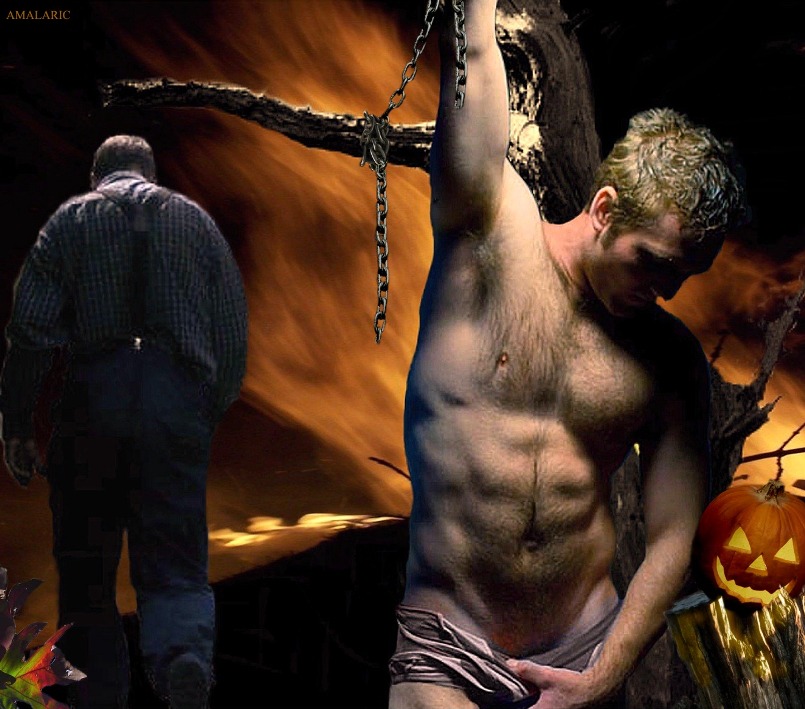