The Telemachus Story Archive
Rousted From His Cell
By Amalaric (Illustrated by Amalaric)
Email: Amalaric

Lieutenant Edward 'Skip' Adams was scared and confused, and had good reasons for both emotions. Captured during a top secret reconnaissance mission on the outskirts of Teheran, he was certain that there would be no intervention on his behalf- not that any effort of the US government would have held much weight anyway in the Islamic Republic. The twenty nine year old soldier had vague ideas of what to expect at the hand of his fanatic and unpredictable captors and it was the 'vagueness' that fed his vivid imagination and raised the level of anxiety to fever pitch.

His natural fear of the unknown and reputedly cruel reputation of his captors was further enhanced by initial treatment, in direct contravention of Geneva protocol, beginning within moments of his arrest. The cadre of Guards that took him out of action- radio in hand and pistol half way drawn from the holster strapped to a meaty hip- disarmed him and roughly ordered the lieutenant to stand, hands over head pressed against a wall with his legs spread wide. No problem there, he knew he had to be thoroughly searched and would have done the same to a captured enemy combatant in different circumstances. The groping hands running over the khaki cloth of his uniform communicated the first, nearly indefinable sense of something being 'wrong'- over and beyond, of course, the plain bad luck of his capture. For instance, a fast sweep would have quickly revealed that the American had no hidden weapons strapped to his torso...yet the hands seemed to linger, probing the massed muscles of chest and back, roaming (eagerly??) over the taut lats and steeled abs...and his breath hitched as he felt his belt buckle jingle noisily undone. Another set of hands moved up both spread legs- again, all according to custom and regulation- but then insinuated themselves in the cleft of the tall soldier's warm crotch, languidly kneading his scandalized balls. All Skip Adams could do was grit his teeth against the invasive groping and wait for the damn Guards to tire of the game, load him into the idling truck and bring him to whatever fucking place they kept for prized captive Yanks.

A couple of hours later his expectations were fulfilled. After what seemed an eternity of bouncing over rutted roads blindfolded and sweating, he was pushed from the back of the truck, eyes uncovered, and ushered into a stark room lit by a single glaring bulb. The rich sound of lazy, shit-engorged flies droned a mocking lullaby as the lieutenant stood in the center of the room, blinking in the unaccustomed brightness at a half dozen locals ranged against a far wall, some standing, others seated, all appraising the handsome American as he shuffled from one booted foot to the other, sweat staining his uniform at armpits and collar, trying desperately to still the pounding of his heart.

He was ordered to slowly turn around as his amused captors greedily examined their prisoner- front, back and sides. The jingling of his open belt buckle provided a jarring counterpoint to the buzzing flies and served as an excuse for the six grinning Guards to lock their eyes on the lieutenant's crotch, damp and, yes, bulging nicely even through the loose material of his khaki trousers. He knew what must be coming, realized that his own side often did the same thing- but we don't do it like this, do we????-preparing himself for the inevitable order that dropped from heavily accented lips a couple of minutes later. Adams sighed and, reaching up to the collar of his shirt, undid the first button. The others quickly followed and his shirt gaped open over the damp expanse of his clammy white tee. The big soldier shrugged off his shirt trying to look unconcerned but when the tee followed, bunched for a split second around his head blinding him again, he felt a renewed rush of foreboding and his balls shivered uncomfortably as his muscular chest and belly were bared to the invisible stares and their secret intent. Adams stood again in the center of the room, stripped now to the waist, ritually stalling for time, though the order had already been given. He caught the gaze of each of his potential interrogators, trying to measure their attitude, to guess at their motives...ah, shit, might as well just say it, to anticipate and, in doing so, to face whatever it might be that they were going to do to him. Time was up. The lieutenant's strong hands fluttered to the first button of his khaki trousers, manfully unfastened it and then the next three or four, mentally measuring the sagging of his uniform trousers...and, remembering suddenly to unlace and kick off his boots and peel stinking earth-stained socks from his feet, shimmied the trousers down to his ankles and shook them free.

Skip Adams stood, stripped down to nothing but his briefs, with hands locked behind his head; reddening with humiliation despite his resolve, ordered to turn...stop, nice profile view...turn again...stop, ah what a welter of muscle on this soldier's broad back...yet again...stop, back to full frontal view, wanting to cup the outline of his dick and balls clearly visible through the thin fabric of his shorts with helpless hands ordered clutched behind his bowed head. He felt a trickle of sweat roll crazily from one hairy armpit over the corrugation of creamy skin covering his ribs and swore he could hear it splash on the floor. A photographer documented the event, snapping glaring shots of the tall soldier as he turned, full body and close ups and his captors made cryptic remarks in their incomprehensible language leaving him to wonder and sweat some more.

Had he been here for an eternity or only the better part of a day? Finally, ushered from the room, the Yank had the temerity to ask for his discarded clothing and was told that the cotton loincloth purchased, all-uncaring, at Wal-Mart in another universe would be all he needed. He shook his handsome head, tried to stave off the gnawing hounds of despair, and was ushered from the room, across an open air walled enclosure and into another part of the compound lined with tiny, windowless cells. One of his wrists was manacled to a ring in the wall of the 8 x 8 foot space that would now function as Skip Adams' 'home away from home'.

Half past one in the morning; a bleary-eyed American lieutenant is rousted from his cell. Clad only in a pair of worn jockey shorts, he shivers in the cold desert air, frantically looking around. Nobody's fool, he knows what must be coming, but knowing at a soldier's mess back in Qatar, or at the briefing (place undisclosed) for this doomed mission isn't quite the same as stumbling more than half naked, but now fully awake, across a deserted courtyard toward the single winking light of the interrogation room. 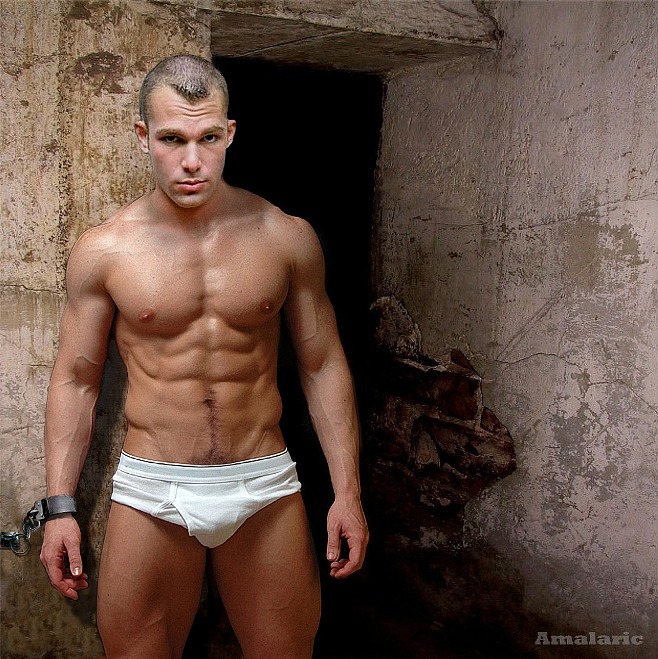