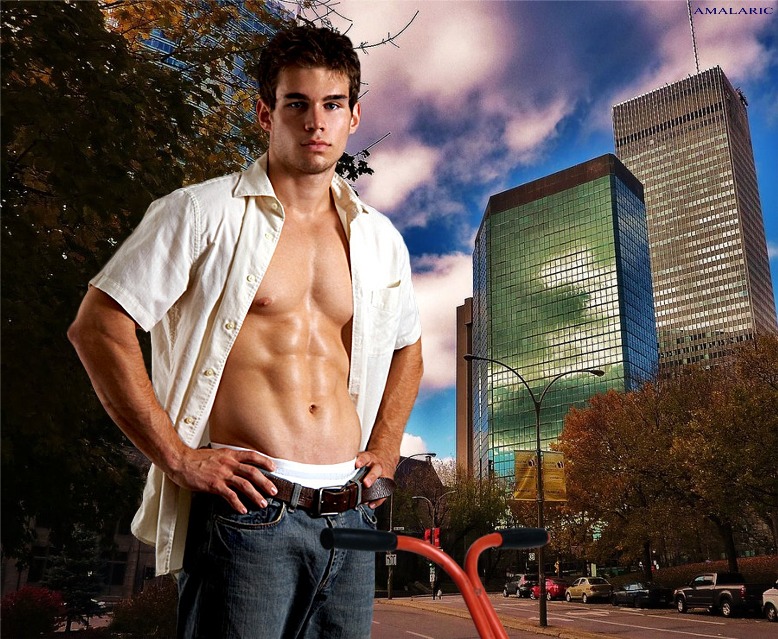 The new stock boy/landscaper/and all around gofer really tried to do his best and that, difficult as it was in other respects, simply couldn’t be denied. Jimmy Ruisdale was young, good looking and full of old fashioned energetic spunk; all the more impressive for his tender nineteen years. Unfortunately (for him), he also packed some perfectly proportioned lean muscle on his six foot frame, with an open, handsome face that served him well, after hours, picking up the best babes on the boardwalk along the beach or any number of nightclubs where working class kids hung out. Yeah, he was the envy of his friends, but it was all good natured; the kid was a winner and nearly impossible to dislike.

Fresh out of high school, the ambitious young man had opted for work with the corporation instead of wasting four more years at university, reckoning that the traditional ‘hands on and close up’ method would propel him along the company ladder as well as any degree. Jimmy was content to begin at the bottom of the pile relying on youthful reserves of energy, goodwill, and raw ambition to see him through. Besides all of that, he was happy doing manual labor, loved to work up a healthy sweat and exercise young muscles and that led to a major mistake- while landscaping the grounds out in front of the office block, he just couldn’t resist the temptation to strip off his shirt.

Wendell Dobson had a mid-floor office with several large windows affording a panoramic view of the city, but that wasn’t what he was looking at. Bored, as usual, he stretched languidly in his leather swivel chair and adjusted the small set of binoculars purchased a couple of weeks ago. The computer screen on his desk flashed a cacophony of flow charts and statistics but they could wait; his attention was riveted on something far more immediate and visceral as he zeroed in on the dick hardening sight of Jimmy Ruisdale working, stripped to the waist and glistening in the sun, pruning the fucking shrubs below. Dobson’s mind whirled with a thousand rank possibilities, impatiently biding his time, waiting for the opportunity that he knew, contrived or not, must surely come. After several minutes, the young exec grunted as Jimmy disappeared around a corner of the building. He pried the binoculars from reddened eyes, blew a deep snort and buzzed his secretary. ‘Harriet, send me up the dossier on the Ruisdale boy, would you?’ His patent leather shoe tapped impatiently on the parquet floor, ‘Fantastic! You’re a sweet heart…’ and he punched off of the intercom, scratching an itch deep in his suddenly tingling crotch.

Jimmy entered the elevator with a sick feeling pressing like a hot chunk of ice in the pit of his stomach. As a trembling finger punched the button that would take him to the eighth floor, he briefly reflected on the novelty of it all, never having been invited to the executive offices which lined the heights before. It should have been a proud occasion, but the terse memo had disabused him of any fantasy notions. Fact was, he had fucked up and headed, like a man condemned, to an uncertain fate. The elevator whisked open with a secretive, accusatory sound and Jimmy stepped into a foreign world of softly whirring air conditioned splendor; plush carpet shuddering beneath his dirty work boots, walls of pastel cheer mocking his doom. It wasn’t my fault… he lied to himself, rehearsing the lame justification meant to salvage the ruin of his budding career, even as he pressed the buzzer that would place him in proximity to a man that he considered little less than a god- Wendell Dobson, company VP and sudden arbiter of a young man’s hopes and dreams.

Jimmy was surprised when the ponderous wooden door to the VP’s office was opened by a frowning security guard. He caught a glimpse of Harriet Troutly sitting primly behind a massive receptionist’s desk with an inscrutable look on her powdered face and just a hint of eagerness, evident in her tense body language, to witness the opening salvo of the unfolding drama. ‘Mr. Ruisdale?’ The greeting sounded like a joke- he was only nineteen. ‘Yes sir,’ Jimmy stammered, suddenly tongue tied and fighting a paralyzing tide of anxiety, ‘I’m…’ he was abruptly cut off by the scowling company cop. ‘It’s my duty to escort you into the disciplinary hearing, shortly to be conducted by Vice President Dobson, and, given the nature of the interview, restraints have been deemed advisable. Hold out your hands.’ Jimmy suddenly felt lightheaded, certain that the smirking guard could hear the hammering of his heart. Nevertheless, he extended thick wrists and watched, as if from an infinite distance, as cold iron shackles linked his hands in front of the sweaty denim of his crotch. Suddenly wet armpits itched mischievously and hackles rose on the back of the young stud’s neck as the security guard laid a hand firmly against his broad shoulder blades and, escorting Jimmy past the staring receptionist, passed into the cool confines of Dobson’s office.

Wendell Dobson sat in a leather chair over a century old and was grateful for the cover afforded by his glass topped desk; better to hide the raging hard on that tented the flimsy fabric of his Armani trousers. He had rarely been in such close proximity to his quarry and had to stifle a broad smile; clearly, weeks of assiduous stalking and painstaking preparation would shortly bear abundant fruit. He stole a fast look at the nervous buck’s crotch, yeah, from the looks of things, today’s haul would be abundant indeed… He tapped a dossier of crisp white paper on the desk. ‘Mr. Ruisdale,’ Dobson’s tone was business-like and intentionally cold, ‘I am in possession of, ah, some rather serious documentation to the effect that you have committed several serious infractions casting the company into disrepute and costing a considerable sum. In a few words, Mr. Ruisdale, it seems that you have managed to fuck up in a big way.’ Jimmy knew it was true and, earlier resolutions cast aside, didn’t try to deny the accusations. Instead, he stammered a rough confession, feebly justifying his actions with a subtle reference to youthful immaturity; he had been trying to impress his friends. The incident, of course, had occurred last Saturday, when a jubilant Jimmy, feeling the oats of nineteen year old adventure, borrowed the state of the art (cost- $15,000) tractor lawn mower and went for a drunken joy ride with best friends Lee Gibson and Peter Beck down at the local golf course. That would have been bad enough but, careening over a steep mound, the tractor had keeled over (barely avoiding a crushing end to Jimmy’s life, if not the adventure) causing untold dollars worth of damage to the very expensive machine and seriously gouging the turf. The cops had been called, under-age drinking duly noted…and here he stood, all sweaty contrition, left to squirm in rank uncertainty about his future. Jimmy Ruisdale’s ambitious dreams were in tatters, his budding career held in precarious balance awaiting the judgment of Wendell Dobson. ‘I’m sorry, sir…’ The stammered reply- half sincere apology and half plea for mercy- hung in the air like a banal inconsequentiality. Jimmy’s heart sank at the stony look on the VP’s face. ‘Normally, serious incidents exhibiting gross irresponsibility would simply merit immediate termination,’ Dobson drawled, ‘but there are other factors, both positive and, certainly negative, that complicate this case.’ Jimmy didn’t know whether to hope or despair and shuffled on booted feet, clearly confused. ‘ I want you to understand at the outset, Jimmy , that I have been given considerable latitude in terms of what procedure the company will follow in regards to your future- both long term and (let’s not forget the law) immediate. For instance, the cost of repairs would, by right, devolve to you- can you afford that sum???’ The question was rhetorical; it would require the better part of a year of Jimmy’s salary to replace the lawn tractor. Dobson went on relentlessly, ‘Furthermore, there are questions of wanton vandalism, trespassing, violation of sundry other laws and ordinances and, of course, damage done to the reputation of the company…’ ‘Sir…’ Jimmy was near tears, but Dobson cut him off with ruthless severity, ‘The golf course owners have generously remanded any decisions regarding the pressing of charges to this company (which held their mortgage) and, so, the decision on how to proceed rests, ah, entirely with this corporation and its delegated representative…and that, Mr. Ruisdale, is me.’ Jimmy held his breath, broad chest frozen in humbled anticipation of the sentence, hardly daring to hope but (he was only nineteen) hoping anyway. Dobson nearly exploded in his Armani’s at the plaintive note in the young stud’s voice as the rich baritone cracked on the fateful question, ‘What are you going to do to me, sir?’

Dobson licked suddenly dry lips and shifted in his swivel chair. The tall stud waited like the condemned man that he was for the VP’s pleasure, thick legs slightly splayed in worn blue jeans, casual green tee shirt damp at the arm pits and suggestively hugging the massive spread of his well-muscled torso. His open, handsome face was filled with consternation, thick dark hair askew and tanned complexion paling with consternation. Dobson nodded to the guard and, springing a cruel surprise, indicated that the shackles should be unlinked (though not removed) freeing the miscreant’s twitching hands. Hope sprang back to life as Jimmy rubbed his wrists, but was quickly dashed as his interrogator delivered a much rehearsed ultimatum, ‘Yes, well, you see Jimmy…’ he paused ominously, ‘after some consultation and, I should also say, consideration of your otherwise blameless record, I am not really disposed to resort to termination, much less the pressing of charges, as a solution to this problem.’ The audible sound, as the tall buck exhaled his relief would have been humorous in other circumstances. Dobson continued, ‘There are, however, other procedures which, given your age and (physical ) demeanor, might be appropriate in this situation and…ah…afford you a valuable lesson for the future.’ Damn, what a pompous asshole!!! The thought flittered through the otherwise lust-besotted mind of Harriet Troutly, called into the hearing as both witness and stenographer. ‘Yes, well, since your work here consists of physical labor, I think it may be appropriate for the consequences to follow suit.’ What?????? Jimmy waited, more perplexed than ever. ‘Please lift up your shirt, Jimmy.’ 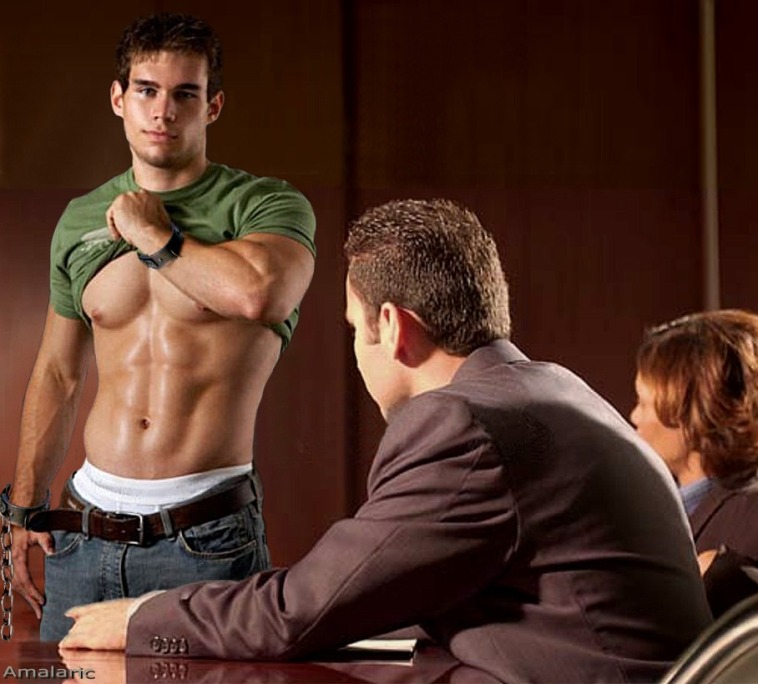