Purple Thunder’s stunning, handsome muscle adonis with well stacked muscle. Purple Thunder has beautiful brown skin, a low haircut, and well trimmed goatee. He was named Purple Thunder because he loves to wear a skin tight purple rubber suit that shows off his muscles and when he fights he rumbles like thunder. His long cock has a cut tip that shows a plump head in a tight codpiece. When he got the call that his buddy Sol may need help, he sprung into action. Purple Thunder decided to wear his anatomically correct suit which was more for function and comfort.

His suit was of choice for the mission allowing his body to move freely with a thin second skin-like rubber technology. Each muscle popped through like it was his actual body part. His glutes showed the deep crack and if you looked close enough, it had an opening to allow his beautiful brown anal star that hit the air. His balls, wrapped in a casing, were designed to allow them to bounce and move freely. His cock was wrapped in a coil to move and bounce but it was held in place by a cock ring. This made his cock hold up as a horizontal 9 inch thick purple encased cock. It was thick with girth and heavy.

Muscles, cock, balls, bouncing in a purple blur as he kicked and took down his enemies. When he fought tougher battles that involved firepower, weapons or defusing bombs, he would wear his other armed suit. Unfortunately he was ambushed in his soft suit. The villains knew that so they made a fake call about a disturbance in a hot underground steam room. They knew if he would wear his soft suit, he would be more vulnerable.

The busting would be brutal, he tried to rescue his buddy Sol, already trapped but failed. This was the second go round after almost a year of recovery in a previous battle that left the both of them hurt. Sol, out for revenge, tried to handle the mission on his own so Purple Thunder wouldn’t get hurt.

Immediately when he got there he was caught by the robotic tentacles. He was trapped. When Shocker, his nemesis found him he was brutally gut punched and caught a bad black eye in the process. The goal was to make sure these meddling hero duo would never do it again. Purple Thunder was squeezed, busted, hurt and now the torture was really to begin.

“Hit him in his huge curved sexy cock,” Doc said. Doc, sinister, mean, and the mastermind of most corrupt things all over the city and beyond. Doc mutated himself and now wore his own green suit.

“Yes Master,” Shocker said. Shocker was huge with brute strength that could crack bones if he caught you. He had automatic mini tentacles that aimed to clamp nipples, balls, and wrap around cocks.

He grabbed Purple Thunder by the cock and twisted the hard plump rod that pulsed and jumped.

“Bring him to the Testicle Dungeon.” Doc said. “We’ll hurt him badly before we drain him.”

“Get off of me!” Purple Thunder said. He managed to press his grappling hook from his belt which shot him to the ceiling. As he rose in an attempt to get away Shocker grabbed him by the legs and slammed him down and smashed his head to the ground. Blood leaked out and the hero was in a daze. Shocker then punched the hero in the head several times until Purple Thunder was sprawled. He kicked him in the abs, balls, and thighs to pulverize his muscle. Purple Thunder was all muscle. Shocker was stronger than him though.

“Thisss is going to hurt,” Trap Joe said. Trap Joe was known for his ballbusting antics. He had serums to make a hero experience agony and pain. He opened his box of ballbusting kits. Trap Joe came out of the busting chamber. Trap Joe was programmed to not feel mercy and to torture testicles. He could see through the testicles with his x-ray radioactive eyes.

Shocker lifted the hero and squeezed him in a bear hug.

“Squeezeee you!” Shocker said. His sinister eyes staring at Purple Thunder’s handsome face go from relaxed to a grimacing face in agony. He felt his spine crack and he was sure a disc was broken.

Purple Thunder’s body was burning, He spazzed uncontrollably as his body was being fried.

Shocker smiled as he could feel the rubber suit melt around the back where he grabbed him. He kept squeezing until his flesh was exposed. He left a burn mark on his back. Shocker turned Purple Thunder around and began to squeeze his abs. The eight pack of muscle was flexing but no match for the Brute strength.

He grabbed Purple Thunder’s abs and pummeled them. Each of his strong brick like abdominal muscles felt the grasp of the massive hands twist, crush, and tear his ab muscle.

The abs were in agony and Purple Thunder stopped resisting.

“That’s it, hero,” Shocker said. “Just relax. Part of this will be fun. Once we defeat you, we’re going to get some nice milk out of you. It won’t all be gruling torture.”

He brought Purple Thunder into a room that was two flights down. It had thick concrete walls, and the only thing that kept the room lit was a fire torch.

“Good, you left the fun part for me,” Trap Joe said.

“Ahhhhhhh,” Purple Thunder moaned. “My ass is on fire!”

Doc turned the device to twist and pump at hyper speed. Blood oozed down the device from the ass tears. The cut flesh was in more pain from the electric shocks. They roughly tied Purple Thunder’s legs to the back behind his head. His biceps flexed as he was powerless now. Suddenly he felt his codpiece being rubbed. His ball casing was being carefully inspected by Trap Joe. Next to Trap Joe was titanium needles. Trap Joe lifted one and stabbed it into Purple Thunder’s neck.

“This stuff will be a fortune.” Doc said.

“Get him rock hard,” Doc said. “Let’s get this sucker milked.”

Shocker punched the now secure Purple Thunder in the eye and the mouth.

Purple Thunder wiggled as Trap Joe began to rub the smooth brown cock. Purple Thunder’s balls were still tied by the cock ring device that poked out his cock and his balls. Everyone drooled at the site of his package. Two distinct heavy testicles, large, plump, juicy. They each heaved on their own and moved up and down as he breathed.

Trap Joe lifted the balls and inserted the first needle.

“Pain!” Trap Joe said. “Any squeeze to your balls will feel 20 times more painful, so you don’t enjoy this.”

The needle was stuck into his left testicle. As Trap Joe rammed it in he twisted it around to stab the epididymis,

He rubbed the needle around and poked the plump testicle. Trap Joe added gloves, with titanium spikes. He squeezed the nuts and added lacerations to tear into his glands and nodules.

“ARGHHHHHHHHHHHHHHHHHHHHH!!!! NOOOOOOOOO!!!!” Purple Thunder finally belted out. It was clear that Trap Joe’s sinister testicular torture was well practiced. Before he could get his hands on his nemesis, he squeezed and ripped into balls. The torture tactics varied.

“Yeah rip into his nuts.” Doc said as he began to rub his own cock. Shocker got behind Purple Thunder and squeezed him from behind. He popped his left shoulder blade out.

At the same time his nuts were being squeezed.

“Let me get us some milk boyssss,” Trap Joe hissed.

Trap Joe brought out his sinister needles and injected one in the base of the hard throbbing cock. He rammed it into the flesh and wiggled it to poke into the urethra.

He inserted two more at the top on his cock and one into the plump mushroom head. The serum was slowly making its way into his body. Purple Thunder, the pretty boy hero was about to endure even more pain.

The burning began to feel like fire in his cock. 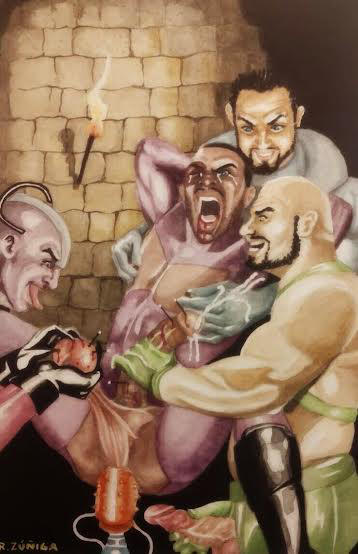