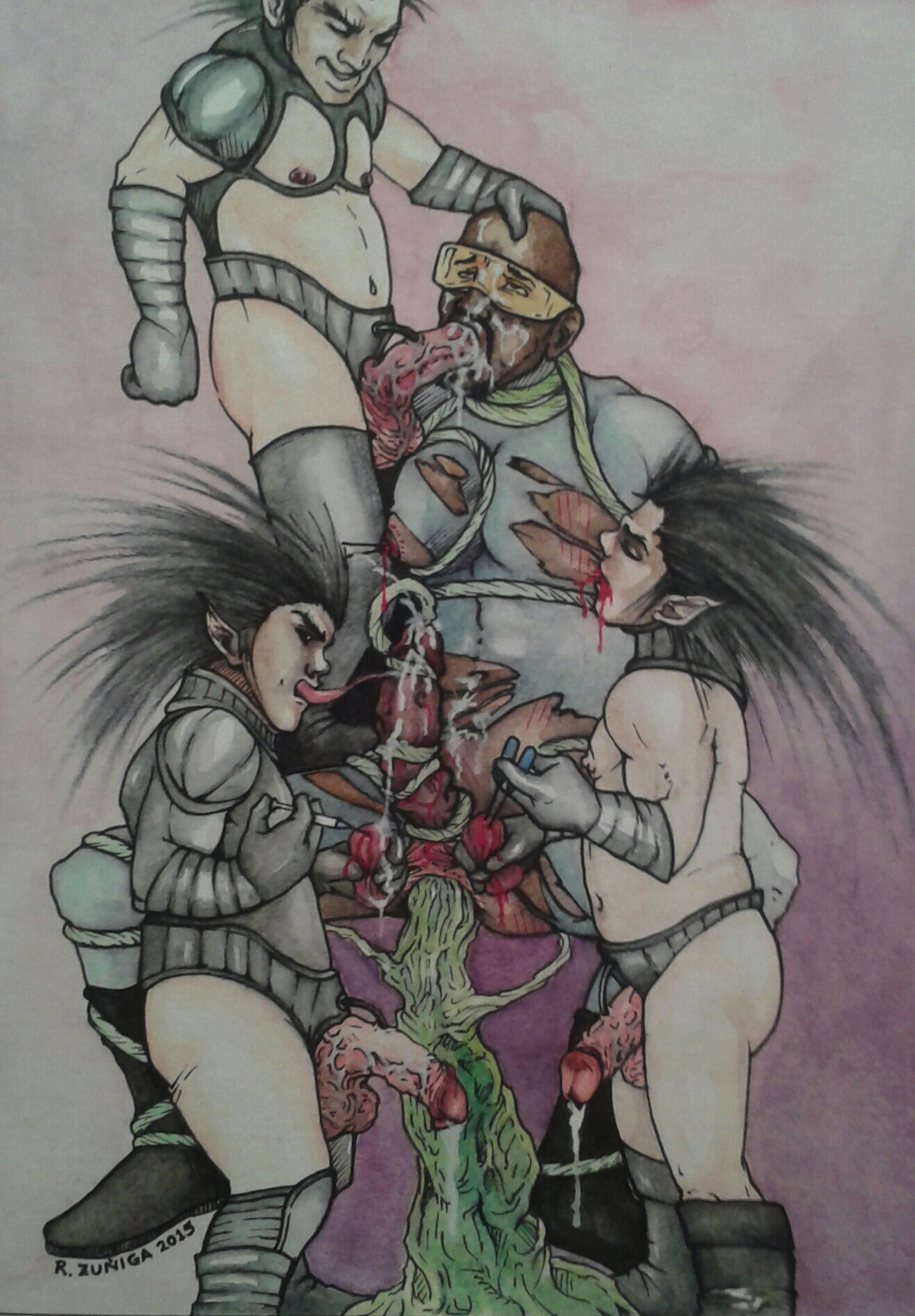 Slate finished his last set of push ups at his headquarters, the LOFT, in downtown Grand Island City. He gazed at the metropolitan city with a gaze. He was in compression shorts and was sweaty from his work out. His 5'11 muscular body was pumped. Slick, his sidekick, confidant and secret lover entered the room. Slick was only 21, young and had a lean build. Slick gazed at Slate's mocha colored latin skin. It never got old to see Slate with skin tight compression shorts and his plump bubble butt he thought. Slick walked over and began to massage Slate's bulge. He tugged down the lycra and Slate's cock and balls popped out.

"Looks back to normal," Slick said. A few weeks before they were all milked by Doc, Ram and a new villain named Fang. Luckily they escaped when Slick activated a sleeping gas on the villains. The police were able to come and subdue the villains and lock them up. After days of milking their cocks were sore for weeks. All was quiet in Grand Island City, too quiet.

"Want me to come too?" Slick said.

Slate zoomed through the city on his custom built motorcycle. It roared through the streets like lightning. Just then he got an alert. Just then..there was an explosion at the Grand Island Fertilizer factory. Just when all was quiet. He zoomed over and saw fire fighters pushing out the flames.

"No one was hurt," a firefighter said. "

Slate walked around the compound. He noticed footprints leading to the back of the factory. He went to a dock by the creek. Slate saw that a boat was untied. He radio called Slick on his ear set.

"Something is funny. I see a light flickering from the old abandoned lighthouse." Slate said.

"Smells like it too," Slate said. "I'm next to the Larry Alberts creek. Going to investigate."

"I'm going to track you just in case," Slick said.

Slate arrived and noticed the lights were off now. He jumped off the speed boat and walked around. Just then he noticed his boat sink. Impossible he thought. He realized he was stuck and it was probably sabotage. Slowly he walked into the entrance of the light house and climbed up the tower. All looked fine. Then he noticed a bunch of boxes of fertilizer. Almost a truckload worth. He turned around and saw a dwarf, he looked creepy.

"You fell right into our ambush like a rookie."

Slate laughed. The urchin dwarf was only about four feet and came up to Slate's waist. One more appeared from a doc and another appeared. It was three of them. They were mutated and looked weird. Slate stood on the balls on his feet.

"You're so sexy in your skin tight rubberized suit." The urchin slowly walked up to Slate and gently touched his codpiece. Slate pushed him back.

Just then another urchin jumped on his back. They were no match for him. Slate tossed the three of them into a pile like toys. One of the urchins dumped a basket of fertilizer into a jug which appeared to feed a seaweed plant. It suddenly began to grow. Slate never saw anything like it. He dodged as two vines began to tug at its leg. He smashed the vine with the heel of his foot. Another vine jut out from the jug as if it multiplied. It slowly wrapped itself around his calf and then as Slate tried to pull a way another vine wrapped around his other leg. The vine was warm, wet and slimy. It had little needle like fibers which Slate could feel. Slate could feel the plant move up his leg and up towards the bottom of his banus. It soon wrapped itself around his tree trunk thighs. Two more vines came from the plant and wrapped around his arms. Finally one made its way around his neck. It gripped him enough to where he could breathe but snug enough that he was secure. The vines stretched him out spread eagle. Finally a thin vine made its way around Slate's round bulge. It massaged its way in between his balls and tugged at his scrotum. This plant wasn't just a plant. It knew how to immobilize the hero. It was an experiment and a mutant. It was alive and a predator like a fly trap. He was secure and trapped.

One urchin began to take a needle and slowly inserted it inside Slate's neck. He then injected a serum which made Slate feel groggy instantly. His scrotum felt warm and he could feel the serum work its way in his veins. He was in a bit of euphoria and his cock became rock hard. The urchins stepped back as Slate squirmed around. He began to sweat.

"Now," Big urchin said. Big urchin was the biggest one at 4-11. He walked over and rubbed Slate's muscular pecs. "We're going to enjoy this boys."

Big urchin took a mallet and began to bash Slate's abs. The two other assistant urchins took mallets and balked at Slate's incredible six pack. It flexed. The urchins worked Slate's abs. He couldn't believe these little men could cause harm. He decided to absorb the hits. This is what he was trained for. Soon the three little men had boners. They liked seeing Slate flex his abs. The vines began to squeeze the muscles all around Slate. His body was pushed out and each muscle fiber strained.

After the beating Slate was still in good shape. His abs handled the torment like a pro.

"Let's get this started," Big Urchin said. He placed his hands on Slate's abs and worked his way south. The radioactive mutant sea weed tentacles slithered around Slate's bulge.

"This is his weak spot boys." Big urchin said. "You know what to do."

One of the urchins bent down and did a upper cut to Slate's bulge. Another one did an uppercut and another one.

Slate's bulge bounced around with each punch. His rubber codpiece began to shred. One of his tan balls could be seen through the tear. The knuckles were reinforced with diamond pieces and meant to shred armor. Slate put his head back.

Slate spat at his face.

In a rage Big Urchin did five uppercuts in a row. The sound could be heard around the room. His balls shook around in the codpiece. At the same time the tentacle tightened its grip on his bulge as well. Slate succumbed to the intense groin pain and blacked out.

The urchins communicated to the sea weed tentacle to pull Slate down and spread him eagle on the ground. The three urchins stare down as Slate wiggles around. His nightmare was a reality. The main arm of the tentacle maneuvered its way into Slate's rectum. It secreted an enzyme that quadruples Slate's sex drive. Slate's balls are full of semen and they are ready to secrete. An urchin begins to fondle Slate's growing sac of lower bulge. They unzip a portion of the codpiece so Slate's mushroom cock head is exposed. One urchin lifts his foot and stomps on Slate's balls through the codpiece.

The urchins tugged at his penis and began to edge him again. They licked every area from his buttonhole to the banus. They

The vine went back in and blocked his penis hole.

"I'm done with this game," one urchin said.

"He's having fun and enjoying this," one urchin said.

They took out a plexi device and placed Slate's juicy balls in it. Slowly Big Urchin began to crush his balls as the glass flattened.

"Say good bye to your nuts Slate," Big Urchin said. He began to tighten the grip and Slate's balls began to flatten.

An explosion happened and sent Big Urchin flying. It was Slick dressed in a new suit.

"I go by the name Slick now," Slick said. Formerly known as Slick.

The Urchin's lunged at Slick and tried to disable him. Slick fought brave and one by one kicked down The Urchins. He stood over Big Urchin who took out a knife and lunged at him. He sliced through but Slick was able to get away.

The vine grew another arm and slammed into Slick's balls.

"Aghhh," Slick yelled. He dropped to the floor.

He jumped on Slick as he tried to recover and slammed a bat in his balls. At this point the vine began to wrap itself around Slick's waist and lifted him in the air. He was kicking but his legs were now bound.

Big Urchin wiped blood from his mouth from when Slick kicked him. In a fury he squeezed Slick's codpiece with all his might.

The urchins surrounded their new prey.

"You little young muscle pup." Big Urchin said with a grin. "Welcome to your doom." Big Urchin rubbed the six pack of Slick and looked at his friends.

They opened the tool kit and put on brass knuckles.

Slate looked at Slick and placed his head down. This was going to be a long night.