From a suggestion by a fan 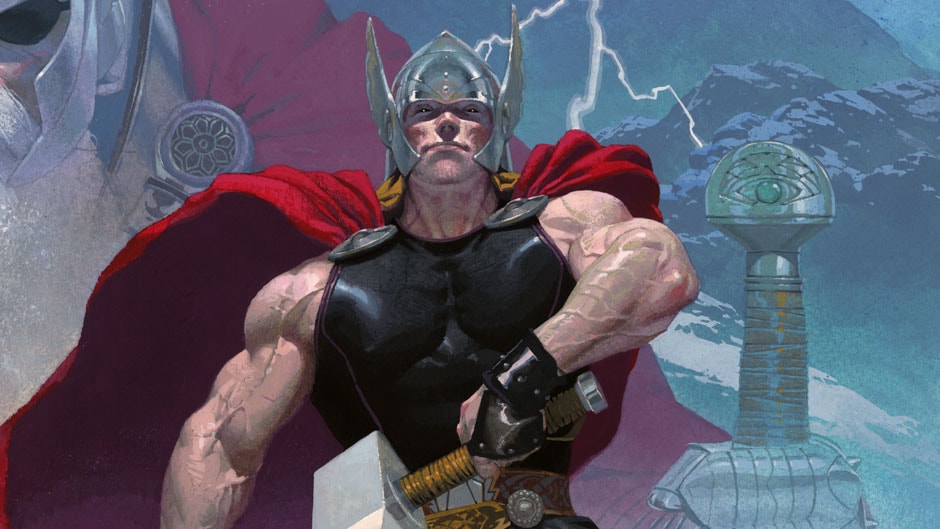 There is an ancient Norse myth which goes like this:

Thor wakes up one morning to discover his magical hammer, Mjollnir, is missing. He soon suspects Loki who, when confronted, insists he is innocent. He also mentions he might have a clue about who took it e.g. an ice giant who hates Thor. Loki seeks out Thor’s sister, Freyja for her help in traveling to the land of the giants. He quickly finds that the ice giant Thrym.

The giant admits to hiding it eight miles below the earth. Thor had once beaten and mocked him and now he wants revenge for these slights. So, in exchange for returning the hammer, Thrym tells Loki he wants Freyja, the most beautiful goddess in Asgard for his wife. Loki returns and informs Thor of the condition. Thor goes to his sister to tell her to marry him. Naturally, this suggestion enrages her, and she refuses.

At a meeting of the gods, the watchman god, Heimdall, suggests that Thor put on a wedding dress, some gemstones, Freyja's special necklace, and some keys. In other words, Thor should dress up as Freyja and travel to Jotunheim to get his hammer back himself. The other gods agree the plan is good.

Loki tells a reluctant Thor he will help too. Grudgingly, Thor dresses up as his sister and goes in her place a ceremony talks place with much drinking afterwards. Now it's time for Thrym to fulfill his side of the bargain. He instructs his servants to bring in Thor's hammer, Mjollnir. When they do, he hands it to his ‘bride’. Thor picks it up and kills Thrym and the giant's entire household.

That's how Thor gets his hammer back. Yet did it really unfold in that way? Our tale picks up shortly after Thor has agreed to the plan and, with Loki, is on his way to his ‘groom’.

“This is a foolish idea,” Thor said as he and Loki entered the great hall to marry the giant.

Loki smiled.” It will work brother, relax.” He slyly winked at the groom as he and Thor walked towards the giant. He could barely hold back from laughing at how great his scheme was unfolding. Here was the mighty Thor dressed in feminine attire. Thor, powerful, well-built, who continually boasted of his masculinity site was now robed as his sister. Even though Thor was heavily veiled, Loki could imagine the embarrassed look on his handsome, blue-brother’s face, as they approached Thrym.

The ‘wedding’ was held. Loki suppressed his laughter when the groom unexpectedly pulled his new bride into his arms and kissed him through his veil. Once released from the embrace, Thor gave Loki a deadly stare but said nothing. Together with his ‘husband,’ a highly annoyed Thor joined the guests at the banquet. As was usual, drinks were served to everyone.

“I am the best drinking here,” Thrym boasted to his ‘bride’.

“We shall see,” Thor replied.

What Thor did not realize was that Loki had laced his drinks with special herbs. These plants not only befuddled the mind, but also excessively stimulated the drinker’s erogenous zones. Thor, unwilling to let anyone out drink him, matched drink for drink with his ‘spouse’. Unfortunately, Thrym’s drinks were not laced. After six of those drinks, Thor was not only high he was also in a state of raging sexual heat.

“Ah I look forward to our consummation,” Thrym teased as he put a hand on Thor’s right thigh and rubbed it.

Thor was shocked that, far from feeling enraged, he felt a slight stirring in his groin. He gazed with ever more bleary eyes at the frost giant whose hands were slowly moving up towards his crotch. “Shall we wait,” he slurred as he moved his right hand to hold Thrym’s hand away from discovering he was a man.

The frost giant smiled and nodded. “As my bride wishes,” he teased. His hand moved await from Thor’s crotch only to move to slip under Thor’s butt cheeks.

“Odin,” Thor loudly yelped causing raucous laughter to fill the hall. Some guests nodded. Others made a circle with the fingers on one hand that was speared by a finger from the other.

Furthering Thor’s humiliation was seeing that that his brother, Loki, was witnessing it all.

Loki grinned and raised his cup. “I hope you are enjoying the extra herbs I put in your drinks, brother,” he yelled out in delight.

The only thing stopping Thor from rising go to him and slap that grin off Loki’s face was that to do so would expose his growing erection.

“It’s time for bedding my bride to consummate our mating,” Thrym bawdly told everyone. He quickly stood, swept up a still aroused and totally drugged Thor up into his powerful arms and carried the thunder god to the bedroom.

Thor squirmed in his embrace, but he focused more on trying to get ‘soft’ than on getting away.

“Relax my bride,” the giant said as he laid Thor on their marriage bed. Thrym quickly lay on top of him. The giant’s hands reached to sensually play with his new wife’s nipples.

“Stop this once,” Thor grunted. Yet again the sensations of pleasure in getting “felt up” took hold of him. As he wiggled under his husband, Thor experienced shockingly unexpected cascading waves of stimulations. His breathing quickened and his pupils fully dilated. He knew he had to push this hulking figure off him but instead he lay under Thrym shamefully enjoying what he was undergoing.

“Such a full chest,” Thrym mumbled as he tweaked and twisted the nipples through Thor’s gown. He smiled seeing his bride moaning and gasping in sheer excitement. He reached under the folds of the gown to let his rough hands scrap across Thor’s stiffening nipples. “A bit hairy but such nicely rounded tits my dear,” he joked as his hands played with Thor’s nipples.

“I do not have tits,” Thor grunted. He was no maiden with a bosom. Yet, he had never realized he possessed such erogenous zones. As his husband fully exploited them. The pain from the abuse combined with exquisite pleasures such as he had never known before during sex with women. “I …do…not ..like…this,” he sputtered.

“My tits,” Thor mumbled as his cock grew stiffer. “on fire!”

“By Odin…stop...stop,” Thor weakly gasped. Unlike his protesting mind, however, his body yielded to the delights in having his whole played with. Even as he objected, his torso squirmed down on the finger pressing it into his chute.

The frost giant slowly sliped in one finger inside.

The giant expertly used the finger to loosen up Thor’s muscled entryway. As his gasping bride shivered thanks to his actions, Thrym inserted a second finger that was quickly followed by another to further open up his bride for consummation.

“Odin…I beg …you…stop,” Thor’s pitifully sobbed. For the first time in his life Thor heard himself begging for mercy from another man. Any sense of his once well-known pride was shattered.

“Taking your virginity tonight,” Thrym joked. “So tight too.” He relentlessly screwed Thor’s hole while using a free hand to continue roughly abusing his bride’s nipples.

Thor, the victor of so many battles over so many other men, found himself helpless in this conflict. His mind was awash in alternating bouts of agony and carnality unlike anything he had ever experienced before in his life. His self-image as a man was being relentlessly chipped away. Yet, his cock was throbbing and his need for more sexual exploitation from this frost giant was dominating his every thought

Thor had never experienced such erotic sensations. True he had mated with numerous women, but none had ever made him feel such intense arousal. By now he was fully erect inside his wedding gown. A large growing wet spot in his crotch covering was revealing that he was leaking his divine essences. As the giant violently thrust in an out of Thor’s anus, the thunder god’s head was spinning. Part of him said he must stop this defiling of his very manhood. Yet, another reveled in being so satisfactorily screwed. “Must fight...must fight,” he muttered as an urge to blow his seed grew within him.

“Odin, you knew?” Thor rasped. He realized he was losing his sense of manhood in the throes of this sexual ecstasy. He heard himself disgracefully whimpering like a young maiden as his balls churned in preparation for a release.

“Once I breed you,” the giant grunted as he too prepared to unload into Thor, “you will be my bitch. I’ll have taken your ass and consummated the marriage, Thor. A frost giant’s bitch will never be seen as fit to rule Asgard. Loki will be its new sovereign.”

“No...no,” he cried out. “I ..am…no man’s …bitch,” he sputtered. Yet, he knew if he was bred, then all was lost. He was sure that Loki would happily tell everyone that the mighty, arrogantly boastful Thor had not only been beaten but bedded like a maiden.

The only reply from his husband was to pound into him even deeper. “Breeding you,” the frost giant yelped as he felt his body getting ready to shoot into Thor.

“YES!” the giant howled. “Breeding my Thor’s virginal pussy,” the giant roared as he shot his wad into the squirming Thor.

The giant grinned knowing that Thor, the very symbol of Asgard’s manhood had been well and truly hammered into sexual submission.

“Now you will learn to suckle your husband’s manhood, my bedded bitch,” a victorious Thrym instructed as he brought his cock to Thor’s lips. He watched as the now utterly degraded and mentally defeated thunder god meekly parted them to allow his defiler to enter his throat. For the next few minutes, the frost giant orally plowed Thor’s mouth ignoring his mate’s gurgling struggles as he was taught art of cock-sucking.” Once I’m slicker, I will again fuck you,” Thrym stated. He observed Thor’s wide-eyed reaction of shock and laughed. “Oh I intend to seed you many times before the dawn requires your return to Asgard!”

Throughout the long night, in the great banqueting hall the room shook with the sounds of thunder combined with Thor’s screeches as both his holes were thoroughly sodomized. Loki smiled and raised a cup to the guests. “Tonight we celebrate for the once might Thor, god of thunder, was hammered and I will soon rule!

At dawn, a submissive, wrecked, humbled, and royally fucked Thor was guided home by his smirking brother. Loki could barely suppress his delight at seeing his once preening, overbearing brother walking vaguely bow-legged. He observed Thor’s once flat stomach bulged from the copious amount of spunk he had consumed.  A quick glance at Thor’s rounded rump also revealed a growing wet spot thanks to Thrym’s seed oozing from the thunder god’s ravaged butt-hole. In his grip Thor held both his hammer and the memory of a greater hammer that had forever castrated his sense of manhood and turned his Asgardian butt into the frost giant’s cum-dump.

Author’s note. Of course that is not the way the bards told the tale of these events. Mighty Odin, shocked that his handsome, muscular son had been mentally and sexually bottomed by a frost giant, made sure the tale was ‘adjusted’ in the retelling. They say Thor sometimes yields to his craving to ride a frosty dick and slips away to be bedded by his ‘husband’. When one hears thunder during a winter storm it’s said that is the moans of the mighty Thor once more getting hammered.

Feedback strongly encouraged. If you like my work, check me out on Amazon too.