The Telemachus Story Archive
The Scarlet Avenger vs Doctor Doom
Part 1 - By the "pricking" of ...
By Kyle Cicero (Illustrated by Herodotus)
Email: kysen1@yahoo.com 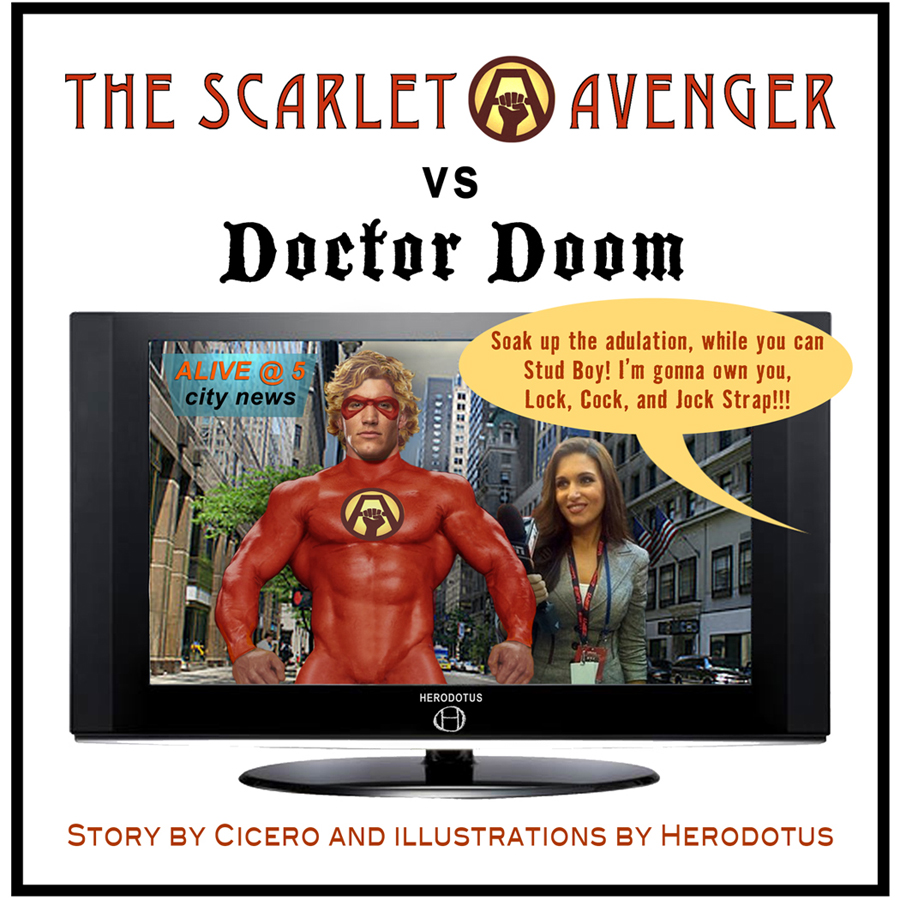 “It seems once more our young heroic Scarlet Avenger has thwarted another underworld crime,” the TV reporter announced on the local news. The young female reporter turned to look at the tall muscular masked man standing next to her. “On behalf of our city thank you,” she gushed as she ogled the sculpted red Lycra clad six-foot man next to her. “Anything to tell us,” she lightly asked as a flush of lust came over her.

The powerful young hero nodded then turned his handsome face towards the camera. Focusing his steel blue eyes directly at the viewers, the blonde haired super being began to speak. “Let this be a lesson to Dr. Doom,” he said in his now familiar deeply sensual masculine voice. “I will defeat you every time. Now I must be off. Take care citizens and you too Leslie,” he stated as he glanced at the now highly turned-on female. With that he slightly bent his well-defined legs and pushed off from the ground into the sky leaving the flustered young newswoman gazing up at his departing figure. Unbeknownst to the viewers, Leslie’s eyes were riveted not on Scarlet Avenger in general but on his tight round dimpled rump. “God I’d loved to lick those twin globes, ” she inwardly sighed as the image of Scarlet Avenger’s Lycra clad bulging package next took hold of her imagination.

“CURSES AND DOUBLE FUCKING CURSES”, a loud voice yelled at the TV screen that was located in a dark room that formed part of the secret lair of Dr. Doom. “The elderly thinly built criminal genius flicked off the TV. “I cannot believe that this twenty-two year old super arrogant bastard is now stopping me at every turn.” The grey haired genius stopped and rubbed his temples. “ I must be calm,” he mumbled as he tried to ease the stress he felt. He had been so close to success. His methodical and carefully planed crimes were all leading to world domination. Then this teenaged super being had appeared to thwart him. Now in his early twenties, this ruggedly masculine superhero was continually blocking any further successes. “There must be a way to stop him.”

“There is,” another more feminine voice said from the nearby doorway.

Dr. Doom turned to see his best molecular biological expert standing there in the doorway. Elaine Barry, once the world’s best molecular biologist, stood before him with a triumphant smirk on her lovely face. Thanks to Scarlet Avenger she had been exposed as a sociopath who had engaged in experimental experimentation and genetic alterations on some isolated Amazonian tribe.  Now hunted for crimes against humanity she had come to work for Dr. Doom on the condition that she could concentrate on one objective: revenge on Scarlet Avenger. “I’ve studied every document on that smug bastard and I’ve found a weakness,” she purred as she walked into the room. “And I assure you that you will love it!”

Dr. Doom smiled at her and waited.

Elaine grinned and held up a small vial that contained a milky white substance. “This is the key to it,” she softly stated.

“What is it,” Dr. Doom quickly asked as he stared at the translucently opaque substance.

“WHAT STUPIDITY IT THIS!” the villain yelled as he rose up from his chair.

“No listen,” Elaine quickly interjected. “It is true. It will stop him!”

“How?” Doom queried with a growing eagerness?

“If it gets into him,” Elaine responded. “ Well it will make him drunk.”

“DRUNK!” the crafty villain shouted at her. The scientific expert’s body grew stiff with fear. “MAKE HIM DRUNK! WHAT THE FUCK DO I…” suddenly he paused in his tirade as possibilities came into his brain.

Elaine’s body posture eased. She realized he now saw the potentials. “I thought it would interest you. It is especially fascinating if you consider that, unlike humans who grow up hopefully leaning how to handle intoxicating beverages…” she let that idea be left unspoken.

“No prior experience,” Doom chuckled. “Oh sweet evil joy. Getting that Mr. Goody-two-shoes drunk on male spunk!” He began to hoot with glee then paused in his happiness. “But how do we get him…you know…drink it?”

Elaine smirked. “Leave that to me,” she giggled as she turned to go. “I’ve made arrangements to turn myself into him.”

“WHAT!” The stunned villain cried out in confusion.

Dr. Doom sneered. “Leave all the deliveries to me. To punk that super-sap I’d drain every guy in the city. Lucky for me I got a brothel near a Marine Corp’s base.” He smiled as he went with her to make a call from his office. 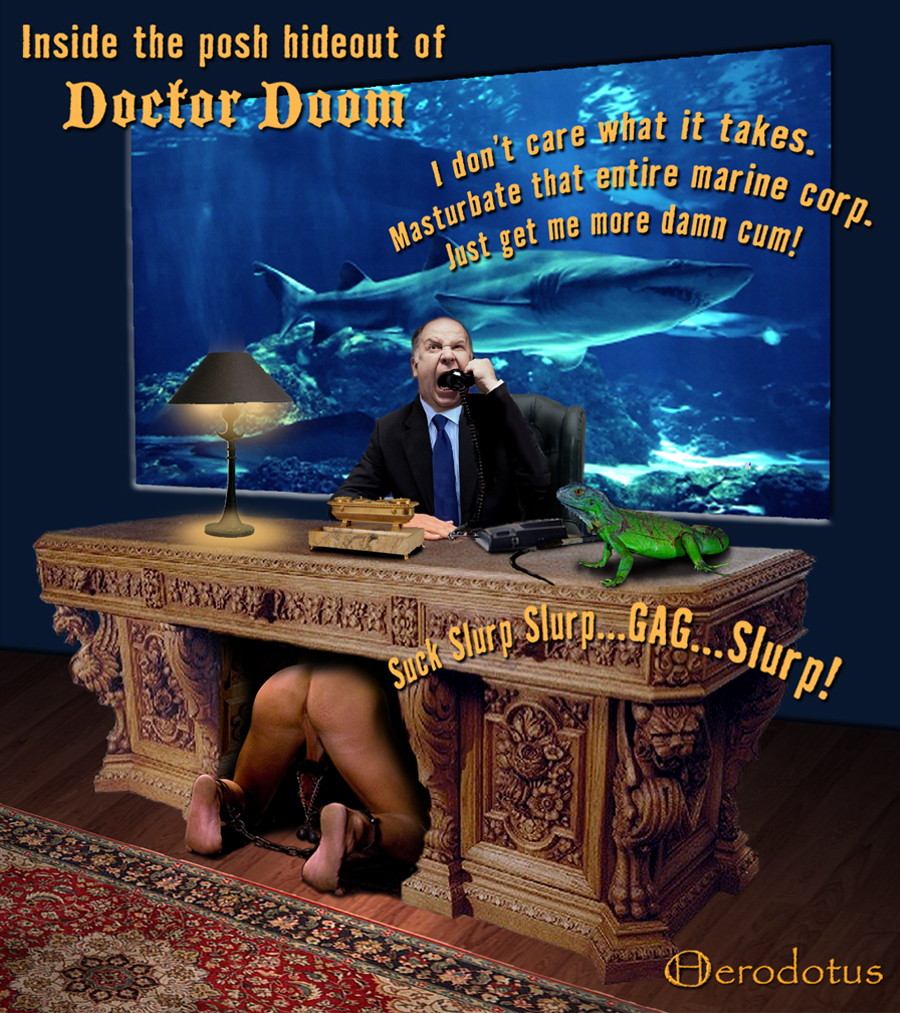