The Telemachus Story Archive
The Scarlet Avenger vs Doctor Doom
Part 10 - Rub a dub-dub his arse gets rubbed
By Kyle Cicero (Illustrated by Herodotus)
Email: kysen1@yahoo.com

10. Rub a dub-dub his arse gets rubbed

For the next hour the guard pumped his load into the hapless young hero’s ravaged arse. Finally however the guard realized he had to get his bedmate back to his cell. By now the Scarlet Avenger was a total wreck. He lay on the bed lightly groaning. He was so high that he was completely incapable of any independent movement. “Time to go baby,” the guard said as he hoisted the moaning superhero back up onto his feet.

“Huh?” the buff youthful hero grunted as he gazed woozily at the other man.  His handsome features were totally relaxed. He gazed with uncertainty at the man holding him. “Urp,” he burped before lightly laughing.

The sight of the once super macho heroic Scarlet Avenger lying on the floor with a boner excited the guard. “Fuck I got a few loads left,” he laughed as he knelt by muscled young hunk’s face. He let his hard cock rub along the lips of his intoxicated prey.

“Mmmm,” the hunk sighed as his full sensual lips felt the other man’s cock rubbing across them.

“Come on baby boy open for daddy,” the aroused guard cooed as he let some of his pre-cum moisten the lips of the horizontal prisoner.

“Cummmmm,” the Scarlet Avenger said as the wet liquid slipped past his lips. The familiar taste of male spunk triggered his brain into action. He slowly opened his lips and let his tongue flick the head of the guard’s leaking dick.

“Oh fuck yeah,” the guard softly whispered. “Suck it baby boy,” he muttered as he slipped his now ragging hard-on into the hero’s willing throat. “Oh fuck boy you are doing it so good,” he grunted as his cock’s soft under-shaft felt the Scarlet Avengers tongue rubbing upon it.  The man looked down as the classical handsome young hero’s face.

By now the alien’s mouth was tightly closed around the guard’s erection. His muffled groans of contentment only served to make this even hotter for his captor.

“Fuccccc,” the heroic crime foe gasped as he began slurping on the other man’s throbbing dick with even more vigor.

A series of slurpings, gags and gulps,” emanated in reply from the Scarlet Avenger as he happily gave his guard an even more intense blow job. Soon he was humping his narrow hips upward into the other man’s hands. As he did his tongue and sucking activities dramatically increased upon the dick in his mouth. 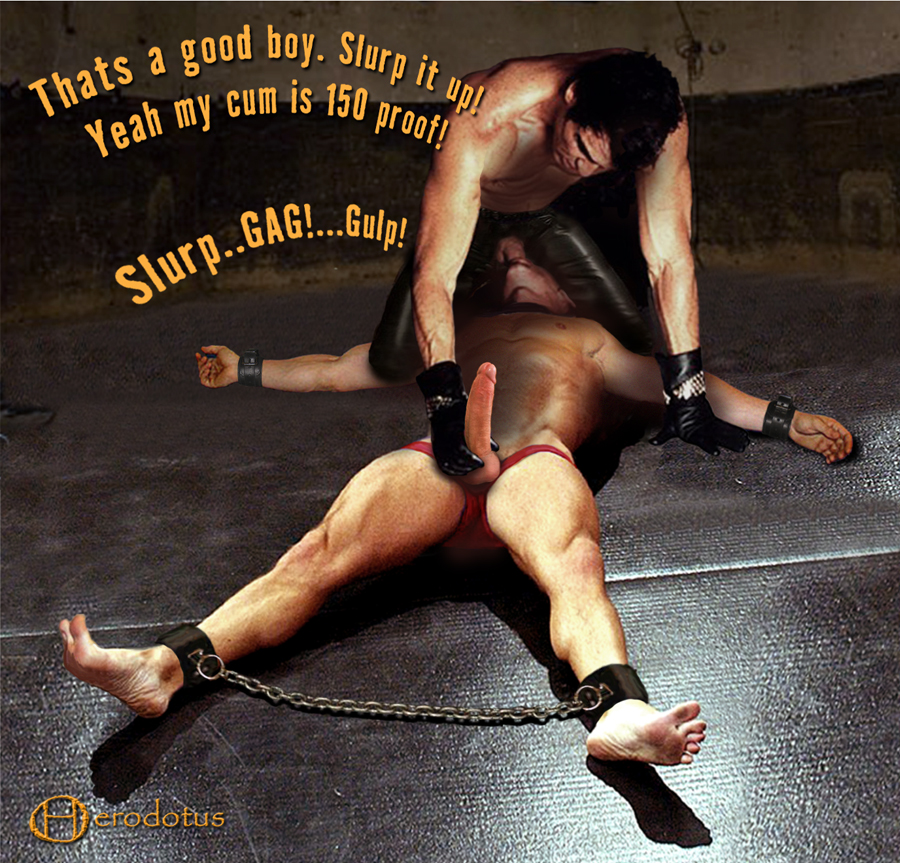 When the nude Scarlet Avenger woke up he was alone in his own cell. He also found that, once more, he had a pounding headache. Worse, for the first time in his life he actually felt physical discomfort. His naked body shivered in the darken room.  He had never experienced pain or discomfort before but that was the least of his mental anxieties. Suddenly the memories of what he had done and what had been done to him exploded inside his brain. His still slightly tipsy mind endlessly played out pictures of the sexual activities he had engaged and, more also disheartening, before whom he had done them. “I will get better. I will not let this crush me,” he quietly promised himself as he lay shivering in a fetal position. As his eyes grew clearer he suddenly saw his uniform in a corner. He crawled over to it. He knew that this must be another copy since his last one had been ripped off him. Gazing at it and recalling how he had disgraced all it symbolized filled him with shame. “I don’t deserve to wear this or any other hero’s costume,” he sniffled in the dank cell. Still, his craving for warmth finally overcame any hesitations. He quickly dressed. Wearing his signature costume, even if only a copy, restored some of his old bravado. “I will fight these men. I will once more be victorious,” he loudly yelled out to the bare stonewalls.” My new conduct will wipe away the shameful things I did!”

“I would not count on that,” a harsh voice said behind him.

The young hero turned to come face to face with the gloved bodybuilder.

“You,” the superhero yelled as he mindlessly charged the man. “You will pay for what you did too me. You had me eating out of a dog bowl. I’ll return the favor by feeding you your teeth,” he roared. As the superhero charged at him, the muscular jailor deftly moved to one side. When the young alien passed by the latter gave the crime fighter a rabbit punch.

“Argh,’ the young stud yelped. Used to his superpowers in any combat he had never had to rely upon superior fighting skills. He was also so enraged over what had been done to him that he failed to concentrate on what he was doing. As he bent from the blow, the other man quickly grabbed him and spun the alien hero around so they were face to face. The other man landed a hard gut punch.

“OOOOOMPP,” the muscled young hero grunted as the air was driven from his body. He had barely recovered when his abs received another even harder gut punch, “Oooooph,” he once more grunted as his lungs emptied of any remaining oxygen. He was still doubled over trying to recover when he felt a hand under his jaw lifting up his head. He gazed at the bodybuilder with woozy eyes as he tried to get air back into his lungs. He saw the man grinning at him. Hi own brain tried to warp itself around being hurt AND actually losing in this fight.

“Nite boy,” the man laughed as he launched a hard uppercut to the hero’s chiseled square jaw that literally lifted the younger man from the floor and snapped his head backward.

“Ooooo,” the buff alien sighed as his blue eyes rolled up in their sockets. A sudden blackness took hold of his brain. He fell forward into the waiting arms of the other man.

“Too sweet,” the man snorted as he felt a tingling of arousal in his own cock. “Not such the big hero when the strength field is level huh boy,” he continued saying as he lowered his unconscious prize to the ground. “I really cold-conked your superhero arse bitch,” he sneered as he took some leather bands from his pocket and attached them to the slumbering hero’s wrists and ankles. “Wakey, wakey,” he teased as he straddled the alien then patted the Scarlet Avenger’s cheek.

Slowly the unconscious alien awoke. “Huh?” He groaned as he tried to shake the cobwebs from his head. “What happened?” He discovered he was no longer in his cell but lying on the floor in some different dank room. He felt weak and disoriented. He gazed about trying to focus his head.

The other man quickly took out a flask and put it to the alien’s lips. “Drinky time,” he snickered moving to act before the younger man had time to fully regain consciousness.

The body builder simply snarled. Giving another hard punch to the chiseled eight pac of his captive he once more drove out the air in the youth’s lungs.

“Ooommph,” the alien grunted. His mouth opened to let out and then suck in air. As he did so, the other man rammed the flask into the prone man’s throat forcing him to drink. The sounds of “ulp, ulp, ulp,” escaped from the buff young hunk as he involuntarily took in the intoxicating beverage. His flaying arms suddenly quieted down as a blurry look came to his eyes. Soon he was sucking on the flash.

“Good boy,” the other man teased. “Just like a baby sucking on his mommy’s teat huh.”

The captive merely sighed as he finished the liquid. “Fucccc,” he burped once he was done. “You fucked me up again,” he mumbled as the cum-high and its corresponding sexual arousals took hold of him. “Bastardddd,” he wheezed. He was just drunk enough to be incapable of effectively fighting but not as drunk as he was before in his encounters with this man. Little did he realize that this mental situtation was precisely part of the other man’s plan. He wanted his prey woozy with booze but understanding what was happening.

Soundlessly the body builder flipped the weakly protesting hunk onto his stomach. He attached chains to the alien’s ankle bands and the familiar ball gag as well. He looped those chains to one hanging from a ceiling.  Everything was ready. “Now we continue,” he laughed as he positioned the hero up onto all fours.  Savagely he ripped the rump area of the red Lycra costume to expose the youthful warrior’s rump. Reaching under his prey’s waist he grabbed the semi-erect cock of the Scarlet Avenger. “I wanted you in costume when we start. Call it a kink but when I break you today it will be with you having a memory of wearing this when we started. You will burn inside even more then over how low you have dropped,” he sneered as he began to masturbate his captive.

“Noooo,” the Scarlet Avenger gasped as he stiffened in the warm leather hand of his tormentor. The room soon filled with the sensual smell of warm leather. To his shock, it added to his arousal. “Nooooo,” he softly protested.

“Noooo,” yelped the Scarlet Avenger as he tried to will his ever-hardening erection to soften. It was no use. The cum-high had triggered his sex drive once more. Minutes of agony passed until his resistance to this degradation collapsed. “Nooo…ooooo,” he suddenly gasped as his need to shoot overcame his shame at how it was being accomplished. He bucked forward into the man’s cock-grip. He did it again. Then again! 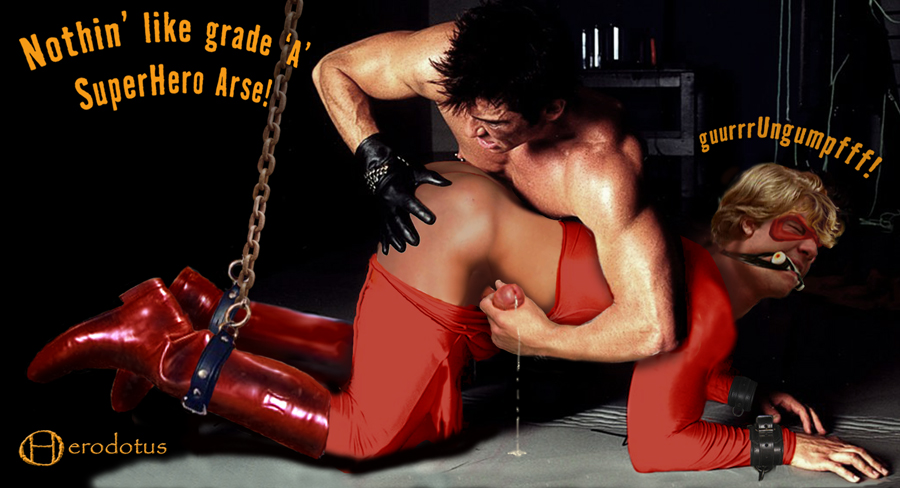 The other man could sense that his captive was close. “Cream for me and you better howl now doggie,” he laughed. He knew the youth would soon comply but he wanted more in this encounter. He wanted to humiliate his foe. “Howl like a doggie who is a bitch in heat or I’ll stop.”

By now the alien hunk desperately wanted to squirt. He closed his eyes and lifted his head in defeat. Yet, he swore he wouldn’t comply with that verbal requirement. He was still swearing to defy it when he heard a low bellowing moan of “AAAAWWWHHHOOOO” fill the room. To his horror he realized it was his voice.  A flush of total embarrassment took hold of him. Instantly his muscular body quaked as he shot his spunk to the floor below him. After he was done he flopped forward onto the floor heedless that he was lying in his own jism. He quietly cried as the other man prepared for their next lesson.