Even after all he had thus far endured; the young hero still had believed that, somehow, he would prevail. His old smug persona still flickered in parts of his mind. The SM expert knew that was probably the situtation. He was determined to destroy it. As a master in the art of training men into SM and submission, the muscled ex-club owner knew all the tricks of the trade. True the buff young hero had been sexually defiled. Still, from past experiences in breaking others, the older man instinctively understood the one last thing blocked full victory. He was completely aware that deep in the superhero’s brain there would be a part that was convinced everything that he had done was all the result of being of drunk. The older man intended to chip away at that final barrier. Cum would play a part but, and this was critical, only used in sufficient dosages to manipulate the youth’s sex drive.

The next day the older man came into the cell where the masked naked Scarlet Avenger slept. As usual now the former wore only his black leather mask, jockstrap and gloves. “Up now,” he barked to the slumbering stud.

“When I say it stops,” the man harshly replied as he grabbed the younger man and roughly pushed him onto the stone floor.. “I run your cute arse boy from now on get it boy,” he sneered as he quickly applied a set of chains to the hero’s wrist and ankle straps that were the only adornment left on the hapless alien.

The blow had been expected. His still half intoxicated brain had failed to react in time to this latest assault. Yet, a part of the old scarlet avenger burst forth. “NO,” the youthful hunk unexpectedly yelled back as some of his old confidence flared up. He again staggered to his feet. “I say no more!” he shouted as if the higher volume in his voice might give pause to the jailor.

The older ex-club owner had expected this resistance might come into play. He was ready to move fast to short-circuit this potentially dangerous situtation. In fact it would be the next steps in the young man’s re-education even hotter for him. He yanked on the chains sending the alien crime fighter sprawling face down to the floor. “Lesson time in obedience,” he yelled back even louder. Reaching to a nearby table he grabbed a large wooden paddle. “Looks like you need some corrective instructions on proper behavior,” he snickered as he brought the weapon downward onto the upturned exposed rear-end of his student.

“Oh no this is only the beginning,” the SM expert laughed as he now vigorously began to paddle the arse of the now yelping superhero.

“Awwwwww. Nooo…my buttttt….sssstttstopppp,” the dumbstruck muscled youth wailed as his arse warmed under this physical abuse. His brain went numb as it was overcome by agonies it had never experienced before in all his life. Every time he tried to crawl away the man pulled him back for even more beatings. The beatings grew in density.

“Not so arrogant now huh,” the other man chuckled as he swung again and again upon the bubbled butt of the alien.

“Will you obey,” the man growled as he hit another series of blows on the fiery red buttocks of the younger man. “Will you do as I say and when I say boy,” he stated.

“Yessss…oh yes…,” the alien hunk sobbed. His eyes were now as red as his butt. Tears streamed down his handsome face. “I will obey. I will obey!” He shrieked as more whacks hit his arse. 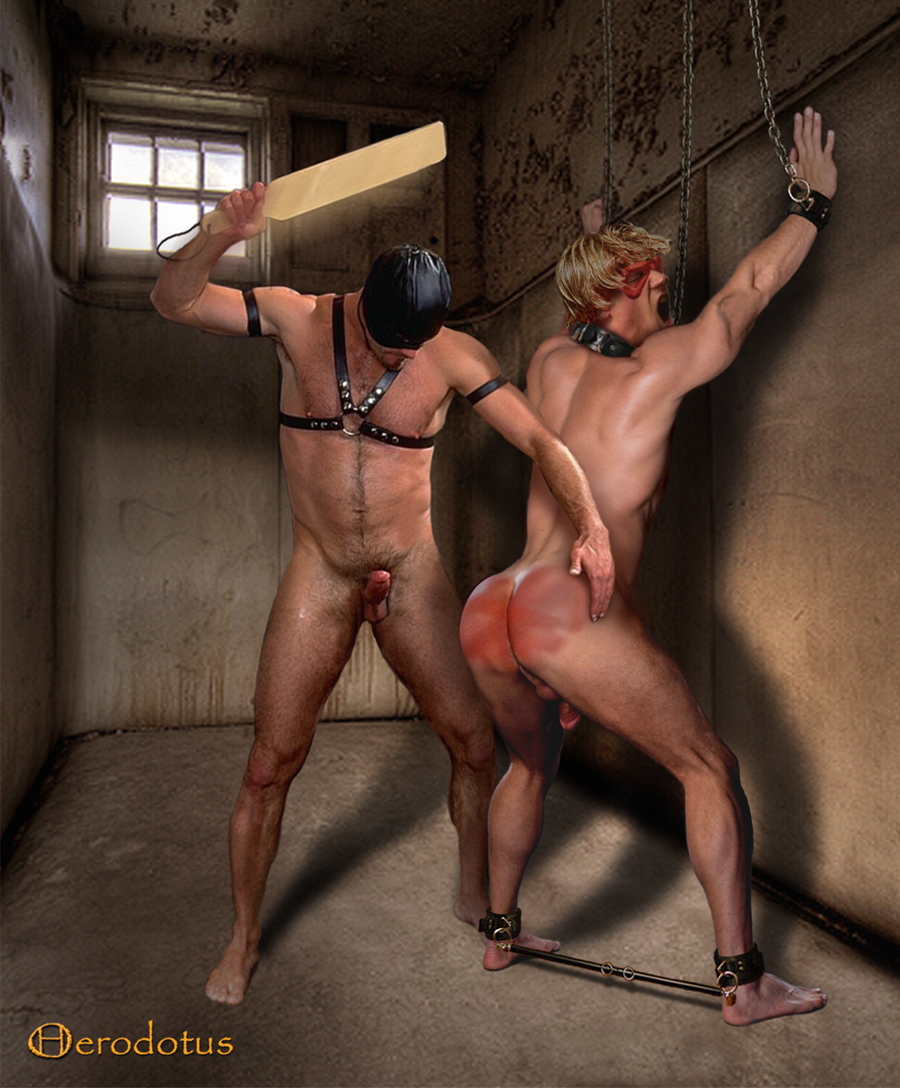 Suddenly they stopped. “Good,’” the older man chuckled. “Now prove it. Crawl to me and bow your head in submission. Tell me you give up.”

Tearfully the  crime fighter did as he was commanded. He shuffled towards the man on his knees. Bowing deeply he lowered his head to the floor before his tormentor. “I submit,” he heard himself say in a quivering tone of voice. The man inserted a gag into his captive. After this was done the young hero glanced briefly back at his upturned butt. The skin there was as red as his former costume. In fact, the entire area was alive with burning agonizing pain. “I submit to you. No more please,” he said through the gag as inwardly he cursed himself for his weakness. He let his head touch the floor once more to signify his submission. 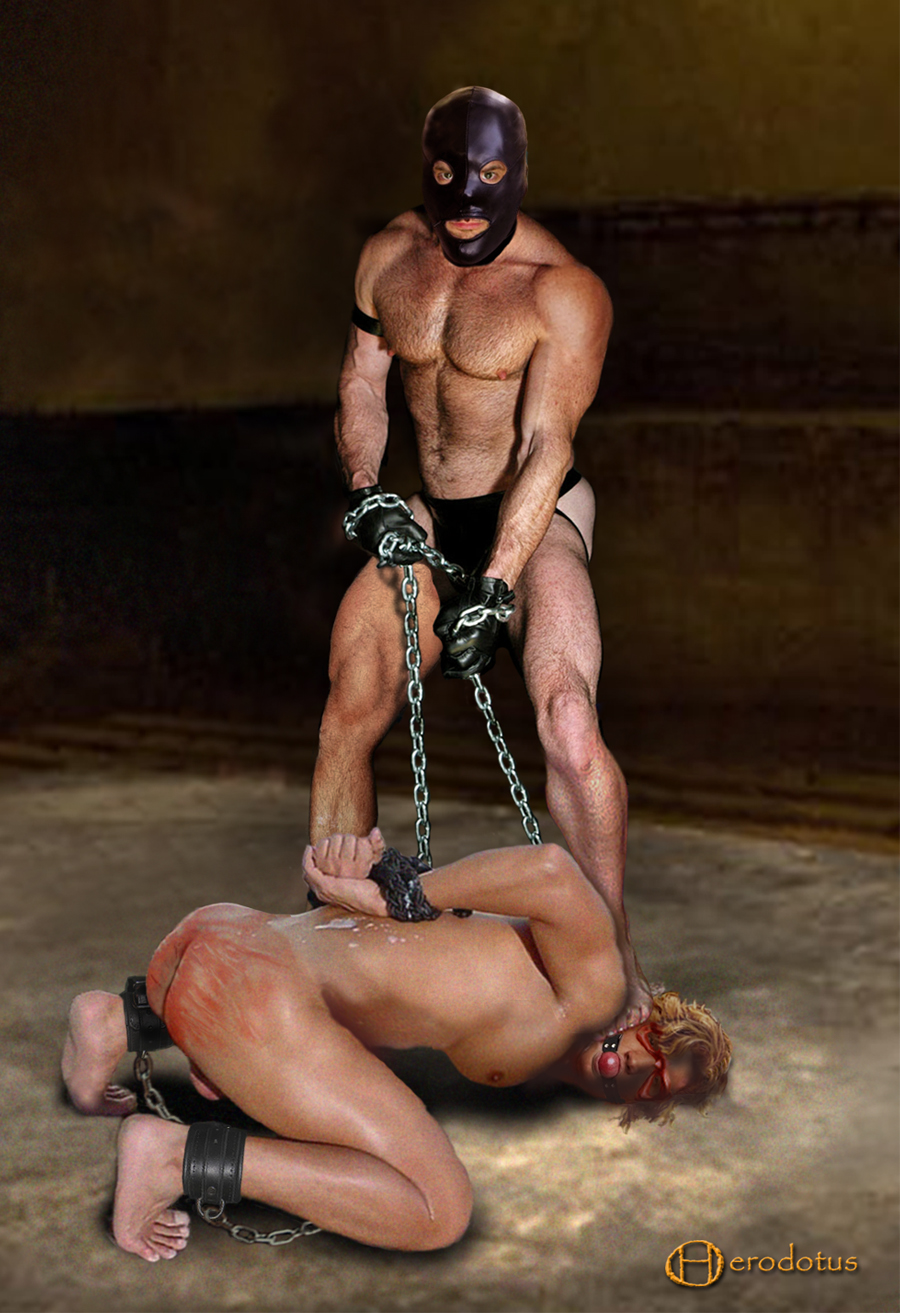 “Good now we are ready for another session,” the SM expert said as he gazed over at a small mirror on one cell wall.

From a hidden room behind the two-way mirror a gleeful Dr. Doom nodded his pleasure. “Things are going well,” he sneered. He turned to a man. “Tell the boys its party time,” he hooted.