This was all the SM teacher had wanted to hear.  He went into the room where the hung-over naked young stud was being held. “Now we truly go to school, “ he laughed as he grabbed the youthful hunk by his curly blond de locks. Roughly he pulled the formerly fearsome crime fighter to his feet. He gazed into the dull blue eyes of his prey. “Still a bit high huh,” he snarled as he took in the dissipated face of the buff younger man.

“Huh,” the tipsy Scarlet Avenger mumbled in confusion. He blinked but things still looked so fuzzy. “Hiccup ,” he unexpectedly burped. A silly smile came over his face as suddenly he took in the grim image of the man who had taught him pain but pleasure as well. “Hullo sir,” he snickered. “Bit drunk,” he laughed.

Holding tight to the youth’s signature blonde curls he yanked his new toy’s head to move him towards the exit door.

“Ewwwwoooww,” the Scarlet Avenger pathetically cried out at each rough yanking.

“Just a foretaste,” the other man said as he continued to hair-pull the yelping former hero from the room to bring him to his new personal “playpen.”

Once he was in the new place the bodybuilder lost no time in acting out his own fantasy of revenge. He took a pair of sheers and quickly cut off the curls from his “gift”.

“My hair,” sobbed the buff young alien as he watched his long locks fall to the floor before his very eyes. He had always worn his hair long and curly. His earthly mother had liked him in that look. As he gazed at the blondish tuffs on the floor he knew his old life was over. With tears falling he quietly submitted to this new humiliation. But, the other man was not finished. He grabbed a bowl of cum from a table. Instinctively the alien hero went for it. A now familiar peaceful high came to him as he lapped up in his trained ‘doggie style’ . When he had finished he watched as the other man then proceeded to “trim my boy’s bush”.  Without any protest the drunken alien former hero observed the other man shave off the blonde under arm and pubic hairs that surrounded the former’s manhood. “I looth litth a widdle boy noth,” he stupidly laughed. The other man then applied a “special cream” that Elaine had managed to create to the shaved areas. “It tingeth,” the Scarlet Avenger snickered as the cream destroyed the hair follicles.

His new “owner” smiled and nodded with amusement. “Yeah wait till you realize you will permanently hairless around your crotch and under your arms.  Physically removed your manhood boy now, it is time to mentally do some permanent damage.” He quickly washed away the cream and inspected his efforts. The buff young man was clean of any “hairy” symbol of his adulthood. “ Now we are ready,” he snorted as he led his woozy prey to a wooden post. Quickly he strapped his prize to it using leather thongs to grip the young man around his ankles and upper shoulders.  The man then looped thick belt around the Scarlet avengers waist and neck. The center of the waist belt held a large translucent ball. When he had finished this activity he strapped a ball gag into his captive’s mouth and placed a metal crown around the latter’s forehead.  He next secured the crime fighter’s arms away from his body using a pair of overhead chains. “Almost done,” he sneered as he placed a suction cup on each of the young man’s nipples. For a final touch the jailor attached a metal cock ring on the now squirming young hunk. “Settle down,” the man told his prize. Instantly the young alien complied with the order. His captor smiled. “Good bitch,” I must really have you broken into obedience. “Now though we’ve a whole set of tricks to teach you using another set of metal straps. The best is coming bitch,” he laughed as he brought out a smaller ring that had two metal bars on it. Quickly securing the metallic circle around the alien’s impressive nut-sack he yanked the ring downward and attached the bars to the cock ring.

“AAAAAAAAAAAAA,” the bound youth roared through his gag as his nuts were stretched outward any away from his body. “AAARRGGHHHH,” he continued to yell as pain shot from them into his body. By now his muscled body was twitching and pulling at the bindings. His eyes glared in fear at the other man.  Shaking his head he made more muffled sounds indicating his throbbing agony.

“Now we play.’ The bodybuilder indifferently joked as he placed a set of cuffs on each of his own wrists. He pressed a button on one of the cuffs. A dull buzzing soon emanated from them. Seconds later they glowed. Soundlessly he taped them together. When he did a bolt of blue electricity shot from them to the metal ring that was stretching the young man’s balls. As it hit the ring a blue electrical current flared from them to the cock-ring, then ball on the buckle and from there to each of the nipple cups. For good measure the cups sent this current onward to the metal band around the Scarlet Avenger’s head. The effect on the young man was immediate.

“IIIIIEEEEEEOOOOO,” he screamed as his powerful body shook in pain. Throughout his life he had been impervious to any type of pain or discomfort. Now, in a short span of time, his mind was being overwhelmed by a host of new sensations. The centers in his brain tried to process all these things. Another blast of horrific pain shot throughout his body. “EEEEEEEEE,” he shrieked as this electrical agony seared into his mind. He was on the verge of a destructive mental overload. In desperation his subconscious sprang into action trying to simply this cascade of new feelings into something he could adapt too.  That part of his brain recalled past torments received from this man and how, from those agonies, he ultimately derived sexual pleasure. Instantly that section of his psyche began the process of transforming the pain sensations into pleasurable ones. In short order, unbeknownst to him, his cock sprung into a full erection.

“Yeah you love it,” the body builder cried out in glee as he saw this occurrence. He intensified the current while repeatedly sending more frequent bolts of blue electricity into his captive,

“EEEEEEWWWWW,” the trussed up crime fighter bellowed. Still his cock remained rigid. By now every muscle on his body was quivering. Yet, more and more parts of his mind were joining his subconscious into converting these additional pains to full blown sexual arousal. Soon, deep in his physiological makeup, the balance shifted as pain became stimulating sexual gratification. As more shots of this current hit him, his cries of agony shifted in tone. Instead of hating it he was turned on by it. “MMMMMMM” he moaned as his cock began leaking copious amounts of precum.  A look of bliss came into his eyes. “MMMOOOORRREEE,” he managed to mutter through the gag. Abuse and sexual ecstasy had become one for him. 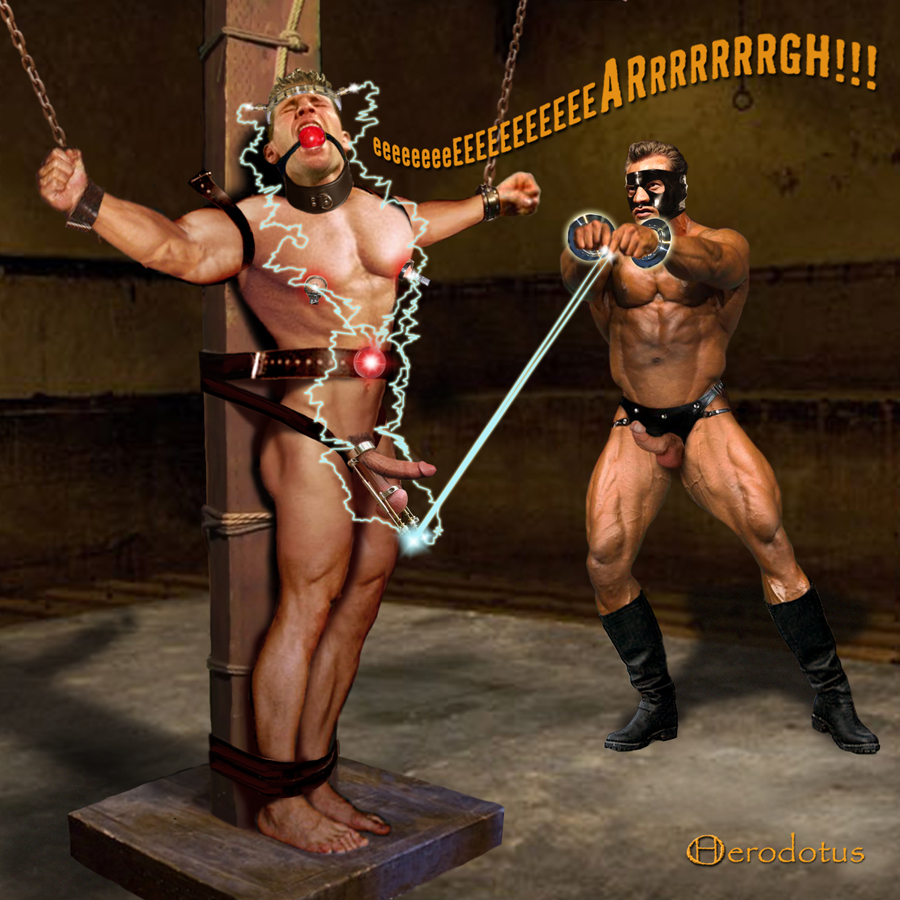 “Yeah that’s right,” the other man hissed in triumph as he saw the changes. “Get to love it. Get to want it.” He yelled as he shot more currents into the alien. “You want it bad now boy huh,” he asked.

“Uhuh…uhuh,” the young hero sobbed over and over after a every bolt hit him.  He was soon nodding his head heading it would continue for him. He was so close to a climax. He prayed the pain wouldn’t end till he had achieved his orgasm. Then it happened.  A powerful surge of current hit him.  He mentally went over the edge into a  delirious world of total sexual ecstasy. “EEEEEOOOWWWWWW…yyyyeeesssss,” he railed as he blew his wad outward in a series of respectable bursts of his own cum. He passed out from the efforts. His well-defined body sagged in the bindings.

The body builder laughed. The SM and sex lessons had begun.