The Telemachus Story Archive
The Scarlet Avenger vs Doctor Doom
Part 14 - Up in air so blue ... balled
By Kyle Cicero (Illustrated by Herodotus)
Email: kysen1@yahoo.com

For the next few months the former hero’s sexual instructions would be both varied continually repeated until he was finally “properly” broken. Many gang members came to watch and, in some instances, to fully participate, in the teaching sessions. In the end, they accomplished the goals that were needed. The youthful upright foe of evil and moral decay rapidly dissolved into an addicted sexual degenerate. Dr Doom was overjoyed. He even had the entire process photographed to create a visual album for his nightly pleasure.  The SM trainer was highly satisfied too but he understood his task was not yet finished.

The young former hero’s jailor had grown to enjoy devising methods of crushing his former foe. As a master of SM, he knew that one critical object in any proper training was to absolutely crush the youthful hero in a way that forever mocked his former crime fighting role. His “student” needed just one final touch to be fully “domesticated”. That final “graduation day” he took his student into a room where another hooded man waited for them.

“What are you doing?” The now intimidated former superhero lightly asked as this other man attached a complex set of metal riggings to black leather bands that had been placed around the former’s wrists and ankles.

The self-appointed trainer merely smiled in a way that sent shivers into the younger man. When the alien was secured this silent third man went up to a side button on a nearby wall. “Let’s reenact that Peter Pan act you love doing for the camera,” the SM expert rasped as he nodded to this other hooded figure. This man, still silent, pressed the button.

“What...Peter…Pan,” the confused youth said as the chains began to pull at him. The eerie quiet of this other hooded figure now unnerved him the most. “Why doesn’t he speak?” he excitedly asked the smiling jailor.

The expert gave no rely. He had ordered his friend to keep quiet knowing that very lack of sound would cause the young hero to feel a greater fear during this last critical session.

A whirling hum from some mechanical machinery came into the room after the button had been pushed. The Scarlet Avenger felt a pull on his ankles and wrists. His chains had been secured to an overhead metal square that carried him upward into a spread eagle position. “What is happening?” He fearfully asked. This somberly silent third man then went to a corner of the room. Soon he came back with a type of World War One gas mask. “What is that for?” the increasingly nervous alien croaked. Again this unknown soundless man said nothing in reply. He placed the black mask over the squirming superhero’s face. “No. Why …what are you doing...take this off,” he shouted through the mask at both men. As he moved in his bindings his body helplessly swung back and forth,

Quickly the Scarlet Avenger recognized the song. The lyrics were from a certain Hollywood children’s movie. Soon the muscled alien was hovering above them like the leader of the famed “lost boys”.  He also realized this was the all too familiar soaring position that he always used when leaving places after his victories. This time however he was not in his heroic red costume but rather pitifully naked with his manhood dangling downward. Unlike in those prior times his current aerial position was far from triumphant! “No please,” he moaned as a wave of humiliation swept over him. Flying had always thrilled him. He had secretly taken a hidden delight in showing off for the crowds. Now that satisfaction was being taunted by this unfolding obscenity. As the buff youth contemplated this fact, the trainer quiet assistant went under him and placed nipple clamps upon their prey. “Ouch,” the hero whimpered. He wiggled in his bindings but it had no effect on his captors’ actions. By now the pain in those abused areas had intensified yet, he also felt the mild stirrings of sexual heat that came with his experiencing any such discomfort. “No. No. No,’ he mumbled even as he slightly stiffened. He didn’t want this to happen especially in his current position. “Please don’t. Please, not like this. Oh please,’ he whined through his mask like a broken teenager as his mind processed this last and most devastating polluting of the last remnant of his super heroic persona.

The Scarlet Avenger instantly detected the scent. He frantically tried to hold his breath but ultimately failed. The only thing he accomplished was to take in a larger amount of the concentrated cum-fumes when he finally took his first breath. Its effects hit the flying crime fighter like a bomb blast.  His eyes popped open as he gazed in terror at the two men. Then a peaceful dreamy appearance came over him. “Fuccc,” he sighed as his cock went fully erect. He giggled in his bindings causing his chiseled frame to lightly sway back and forth in the air. His heavy balls swung like a pendulum slapping against his muscled thighs. “Fucking…” he gasped as his cock quivered in its erection. A bead of pre-cum glistened on its slit. The intoxicated hero writhed in his areal position. As he nuts repeatedly slapped against his thighs he groaned. “Ahhhhh….mannnnn.” From the low tone of his voice it was obvious he was getting off on the jolts to his pouch.

“That’s good,” the trainer sneered as he reached up to squeeze the hefty hanging nut-sack of his “student”. His companion tightened the clamping devices that had been secured to the bound hero’s sensitive nipples. The twin pains drove the young hero crazy with sexual heat.

“Argh nooooo…mmooorrreeee,” the bound soaring hero yelped as his balls andd nipples were squeezed and tortured. Still, thanks to his growing cum-high, a part of him found this new physical abuse highly stimulating. In particular he was finding he loved having his balls played with and fondled. “My nuts. You’re doing my nuts,” he grunted as he swayed above the men. The pains were bad but his cock responded by leaking more pre-fluids.

“”Why don’t we just see if you can fly and shoot at the same time,” the SM fiend hooted as he squeezed the nuts of the younger man. He nodded to his friend who engaged in the same activity upon the youth’s nipples.

“EEEEEEooowwww,” the Scarlet Avenger yelled as the men’s rough hands further manipulated their prizes. The pain was mind intensifying yet, to his horror, the superhero discovered the relentless pressure on his balls and nipples made him desperate to pop a wad! His balls rose up in their sack and his chiseled torso stiffened.

“Yeah, “ flying above us all,” his jailor sneered. He knew the signs of an approaching orgasm. Just one last push would do it. “Mr. Big fucking hero acting so smug before huh. Looking down on us all. Well what do you think now pussy. Butt-naked in the air and ready to cream huh.” He laughed then added one last final blow. “You’re not such a hero up in the air now are you. More like a strung up piece of meat. Go on you bitch. Pop a wad for the people. From now on, if you ever fly, you will only remember this time with me. You squirming and throbbing while ready to cream like a bitch in heat. GO ON CUNT. DO IT!” he yelled.

“No. Not like this,” the younger man shrieked as the SM expert repeatedly gave a series of hard crushes to his alien’s jewels.  The quivering flying hunk broke out into a sweat. He could sense the contents in his pouch flowing upward into his cock. It was as if his balls were balloons that were about to pop! He thought about how he had once flown so triumphant in the air. Now he was truly what this man had said about him. He was a bitch fighting his craving to ejaculate. He would never feel the same way in flight. Then it just happened. He felt himself completely let go mentally of his old self-image. His powerful body jerked upward in his bindings. He was ready to seed. He wanted to do it for his master! “I’m cummmmmmminnnnggg,” he howled.

“Let’s fire the guns boy,” his jailer snickered as he clamped harder onto his possession. “Fire in the balls,” he shouted as he gave the nuts one final squeeze. The third man tightened the nipple clips on the alien as he moved to one side. 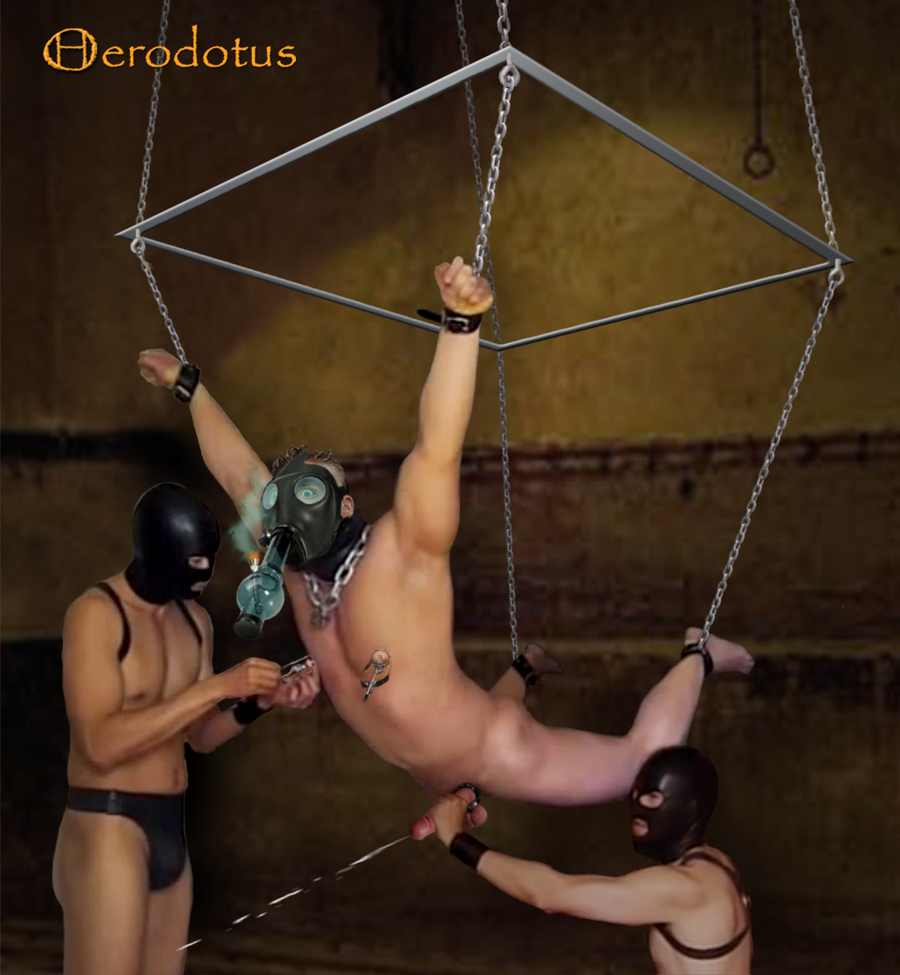 “This was a good day’s work,” the trainer said to his compatriot as they left the nipple clamped young hero dangling in air. “See you tomorrow bitch.” He shut the lights leaving the mentally shattered young hero quietly sobbing in the chilly dark cell. He sucked in the remnants of the gas from his mask then zoned out into a nice relaxing high.

The expert now knew that the young man had been finally broken. His next lessons would be devoted to instilling a new persona within him to replace the old one he had completely lost.