The news reporter stood somberly in front of the TV camera. “Another daring daylight robbery took place in our city center today. So far a series of crime waves have left our city’s economic structure in a shambles. The police seem unable to stop these events. Some reports have indicated that entire parts of the outlying areas of the city have been surrendered to a vast criminal enterprise. Meanwhile our citizens search in vain for our hero, the Scarlet Avenger who disappeared six months ago.” The grave looking reporter paused then, in a husky voice filled with despair she said, “ If you are out there Scarlet Avenger…we need you.”

Yet, in one of the “lost” outlying sections of the city, it was another riotous night in the new SM sex club that Dr. Doom had established for his criminal cronies who had a taste for violent or degrading kink. The same bodybuilder who, so rumor said, had broken the spirit of a famed crime fighter ran it. That night, as the men gathered, they knew that the club manager was introducing his heretofore hidden boy, “Slave Jacob”. Speculation was rampant that it was the very crime fighter whom he had “allegedly” sexually broken. They had all received the doctor’s “advertisement” about the auction. It had included a picture of the item to be sold. The atmosphere was electric.  For months, everyone had secretly argued among their fellow criminal brethren about tonight’s slave’s true identity. While it did appear to be this invincible young hero, quite a few thought that it was a simple photo-shopped image. Yet, they all came anyway on the mere hope of its veracity. If it was this crime fighter, many had a strong desire to acquire him. As the men took their seats an excited buzz took hold. Then the room went dark.

Suddenly a light hit an open space revealing the hooded and booted club manager. His muscled upper body glistened in the spotlight.  His powerful legs were covered in black tights that accentuated their defined power. The assembled men would have normally been fascinated with him. Yet it was the other person next to him who, quivering under the gloved grip of the club manager, transfixed the crowd. His body glistened under the light. His only adornments were his chained metal slave collar, two metallic loops each of which pierced a nipple on his powerful chest and, a decorated metal jockstrap. His sculpted muscular legs wore a set of chains that lightly clinked as he swayed before the men. His blonde curls had been shorn to a nice buzz cut and parts of his face were covered by an intricate series of black leather straps that held a ball gag securely in his moth. Still, he was recognized if only because he wore the shredded top half of his costume and his red mask. Around the duo were a group of men some naked, some in leather gear and, some merely hooded. One man was busy using a camera to provide a worldwide feed to other interested international villains.

“It is true,” a voice in the crowd laughed. “Doom turned the Scarlet Avenger into a fucking faggot.

“Hey check out that jockstrap,” another sneered. All eyes now took in the top of the jockstrap. At its top was a blinking scarlet jewel. Many recognized the joke it was meant to imply.

Applause broke out among the evildoers. The once righteous and morally smug young former hero heard their derision. He had been nicely “cum-dosed” just before his unveiling and was even now sensing that intoxicating relaxation coursing throughout his body. Yet, for now, he was still able to realize what was happening. Visions of his conduct in these last months fired inside his brain. He had let himself be degraded. His childhood guilt kicked in as he thought about how ashamed his earth parents would be of him. With that shame came a growing sexual heat. “Mmmmmmm,” he moaned in defeat. He bit on his gag not realizing it had been rigged for just such a contingency. The ball was hollow and had a tiny hole in it that had been positioned to face inside his throat. As the alien stud bit down on it the ball shot out a special high cum concentrate. It was as if he had taken four shot glasses of pure grain alcohol. “”MMmffccuuuc,” his mumbled as he slurped it down his throat. His cock stiffened in the cool metal jockstrap. The body builder reached down and pressed the flickering red jewel in the jockstrap. To everyone’s delighted surprise the metal device started to hum and vibrate. “”UUUUUGGGHHH,” the once macho superhero grunted as his cock was electronically rubbed. His powerful chiseled body swayed a bit. As the crowd watched the young buff stud ‘s eyes rolled upward in his sockets. Soon he was thrusting his hips slightly forward trying to ram his erection onto the surface of the vibrating metal. All he wanted now was more of these overpowering erotic sensations. He would now do anything to get it. His old moralistic macho spirit dissolved. To the very core of his youthful alien brain he knew that from now on he would be just a cum-whore. His role as the super heroic Scarlet Avenger was a thing of the past. Cum-slut slave Jacob was his new persona! “I need to be fuccccc,” he gurgled through his gag. “I need cummmmmmmm,” he sobbed as he vigorously humped into his metal strap.

Yelling among the assembled men broke out almost drowning out the youth’s muffled sobs of all-consuming sexual heat. The club manager knew this lewd display would excite the crowd into frenzy. The bidders were almost ready! The former’s continuous muffled sounds of arousal only increased the hoots and catcalls around him.

“Fuck look at those fucking dimpled cheeks,” a voice in the assembled group croaked.

“I gotta fucking get me some of that arse,” still another man whispered to his friend.

“God you really pussied that bastard,” someone yelled out causing more laughter in the criminal crowd.

The sight of the hard chiseled former crime fighter’s body mesmerized the crowd. More arousing for them was observing his meek compliance to being subjected to sexual inspection and use. It was also noticed that slave Jacob had his hands cuffed behind his back as well.

“What’s with the cuffs buddy,” a corpulent man in the group asked with a touch of concern in his voice.

Re-positioning the bitched youth to reface the crowd the manager told them that, “He loves being cuffed behind his back. As you can see, we have him wearing his favorite pair. You can keep them later as a souvenir. So bids to fuck him over tonight will begin!” 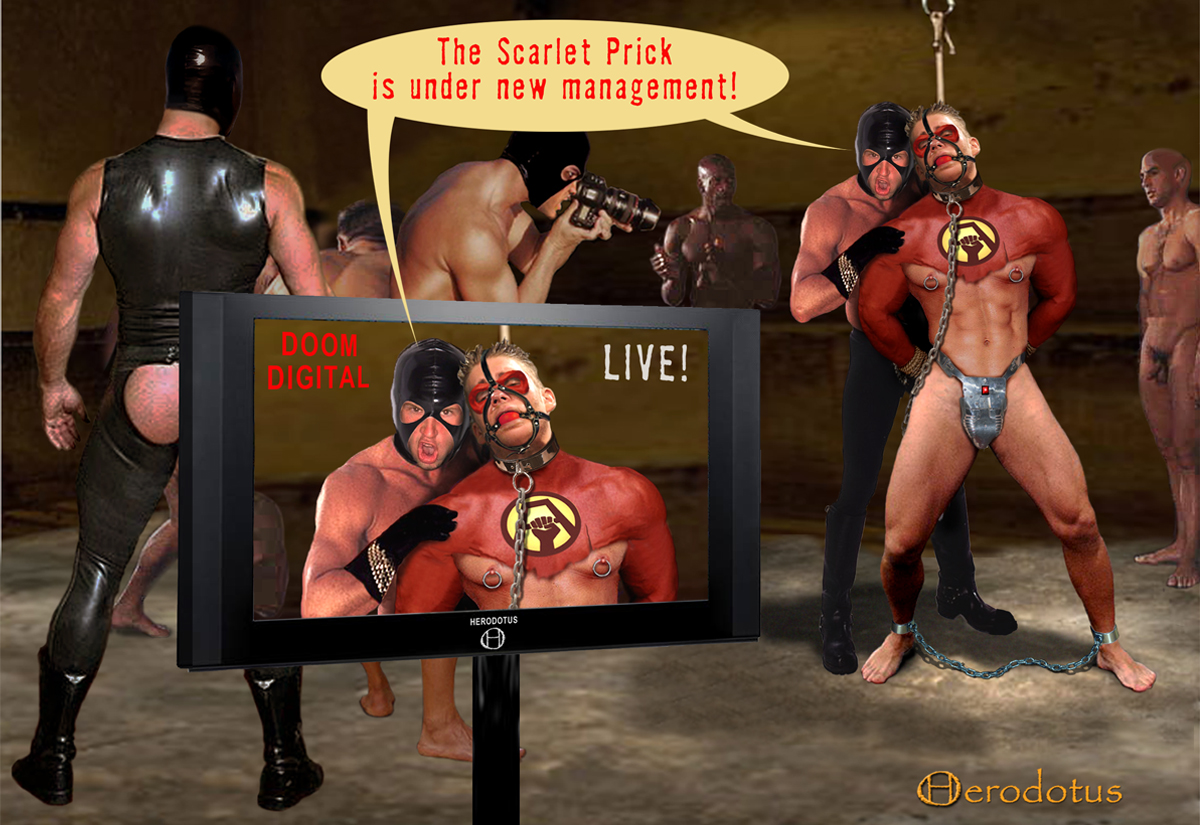 Days later a villainous quartet met in a secret lair.

“Well Elaine that worked out well,” Dr. Doom said as her granny and the SM expert nodded. “Our buff young alien is nicely servicing the clientele of his new owner’s brothel. I hear he cannot get enough men stuffing their spunk into him. Such a pity when the young go bad and lose all self control like that,” he snorted with glee. “By the way, I hear you’ve made another discovery too.”

A wide evil grin came to Dr. doom’s face. “You mean we can take out more of them.”

“We can indeed, plus make a nice profit too,” Elaine replied. “Every crime lord has a superhero foe thwarting his plans. They will pay well for our services.”

“Dr. Doom’s School for Wayward Superheroes ,” the evil villain cackled. “Sounds good doesn’t it. Well I have a staff already right,” he smiled as he looked at the other three. “Let’s begin!”

“I’ll get the tea ready,” granny chimed in as the rest joined their boss in peals of laughter.