“Godamnit you did it,” Dr. Doom shouted with glee as he took in the sight of the once mighty Scarlet Avenger fully intoxicated and helpless bound to a chair. “Gees what the fuck is he doing?” he asked Elaine and her “granny” as he gazed at the muscular youth’s chair gyrations.

“Fuck this should be filmed,” Doom grunted as he watched the lewd display occurring right before his eyes.

“Oh it is,” granny calmly stated as she pointed up to a blinking red-lit camera that was affixed to the ceiling. The lens was clearly positioned to give a full shot of the super stud in all his degrading glory. “But wait because this will be fun,” she said. As the criminal villain stared the “granny” moved to Scarlet Avenger’s side. She leaned in toward the sweaty face of the moaning hunk. Gently letting her right hand push back the blonde wet curly hair that was plastered to his forehead she lightly whispered. “Do you want granny’s help in climaxing widdle boy?”

The now frantic youthful hunk heard the words “climax” and wildly nodded. “Uhuh…uhuh,” he gasped as he furiously bucked in his chair.

Elaine’s transsexual grandparent slowly reached under her dress and pulled out her erect cock. As Doom gazed at the unfolding scene he could barely speak. He watched as the “granny” placed her erection into Scarlet Avenger’s hand while she simultaneous took hold of the young buff hunk’s red Lycra enclosed erection.

“Okay you are holding it dear,” the granny giggled. “Thank granny as you jerk it off now. Remember it is not nice to be ungrateful.”

“Ah…thank you…granny,” the drunken youth muttered as he stroked what he thought was his own cock. As he did this, the “granny” performed the same actions upon his stiff dick.

The room grew quite still for Dr. Doom. He watched as the city’s masculine macho superhero gave a hand job to a transsexual even while receiving one himself.  “This is too good ,” Doom silently told himself. “And it’s freaking on film too! ”

“It feels…so good,” Scarlet Avenger sighed as his intoxicated brain surrendered to the arousals of his first masturbation. He began sucking in gulps of air. His jaw slackened open.  Part of his young psyche wondered why he had never masturbated before in his life. He suddenly recalled the admonitions of his “parents” to stay pure until marriage. But the ever-increasing exciting stimulations he was experiencing seemed so right. Had his earth parent lied? He lost all inhibitions now. He wanted this badly and he would have it! “Fuck…fuck pure,” he angrily grunted. “FUCK THEM!” Using what his adopted parents had repeatedly instructed him was a forbidden “nasty” word seemed to increase his arousals. “FUCK!” He shouted at one point only to then dissolve into unintelligible yet giddy giggles.

The trannie soon detected that her “boy” was getting close. His hand action on her engorged shaft had suddenly quickened and by now the young hero’s breathing had also increased its rhythm. “Come on, shoot for your granny,” she hissed as she stared at his sweaty face. Scarlet Avenger closed his eyes. With his wet damp curls framing his handsome face he looked angelic. Yet, he was anything but angelic right now. “Shoot for your granny,”

“Yes granny,” he lowly grunted. “AWWW GRANNNYYY,” he yelped. His powerfully defined body went immediately rigid and his hips thrust into the air. “Yes granny...yes granny…” he sobbed over and over as he experienced his first manually induced orgasm. “ARRGGHHHH YESSSS GRAAANNNIIIEEEEE,” he screamed as his hot spunk flooded into his costume.  After that, he collapsed in his chair. His mouth lay open, sucking in the air with a blissful look on his face. 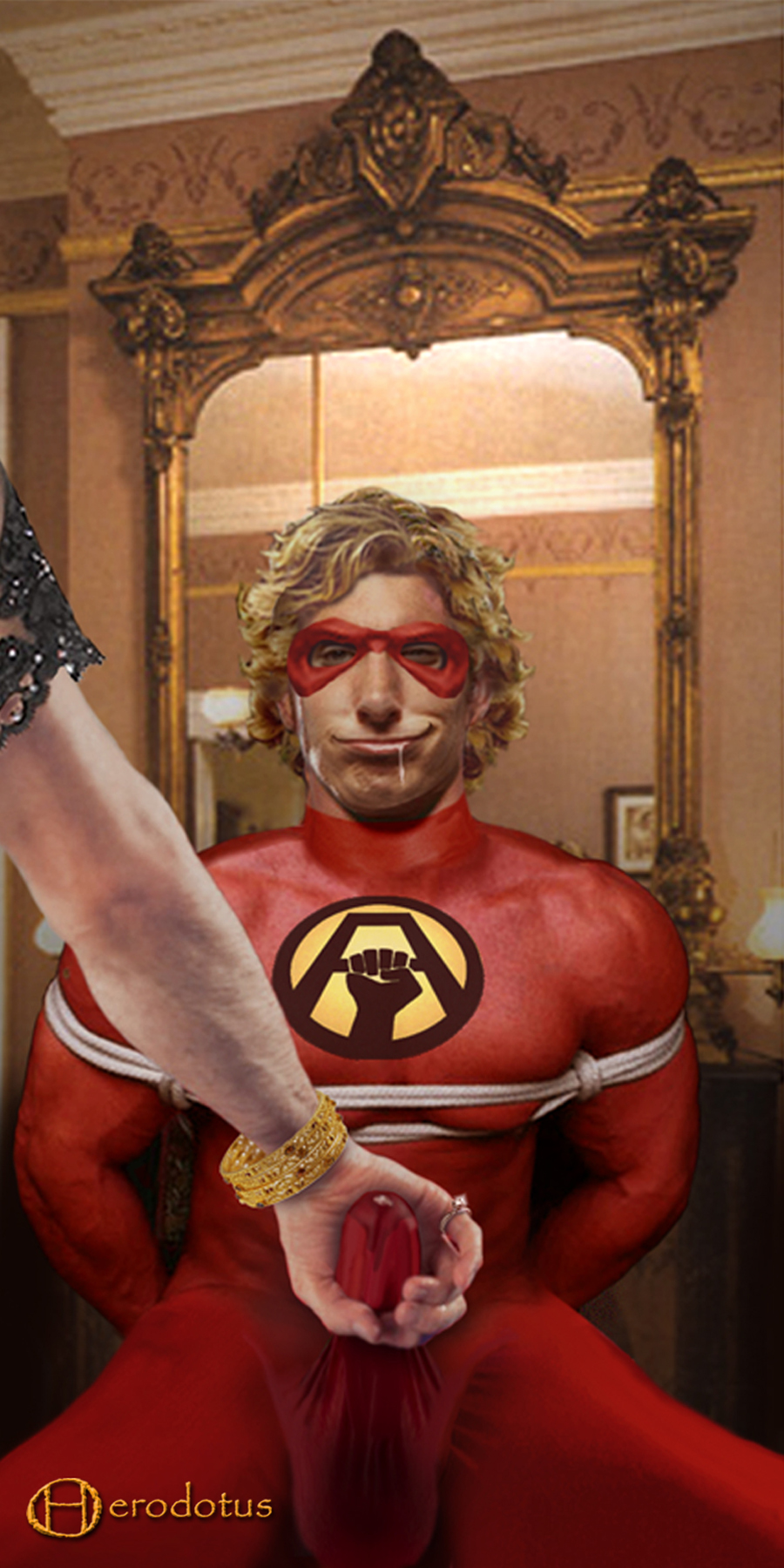 Doom moaned and unconsciously climaxed himself as he observed a growing bubbling white cream seeping up though the red Lycra in Scarlett Avenger’s crotch.