Scarlet Avenger awoke to discover two things. First, he had a massive headache and worse, he had been tightly secured in a spread eagle position onto wooden polls attached somehow to the wall behind him. “What happened to me,” he muttered as he tried to dispel the fuzziness in his brain. He glanced across the room to see himself in a wall-sized mirror. “What the...” he said as his eyes took in the way he had been bound. Whoever had tied him to the wall behind him had done so with a set of intricately tied thick ropes. The encircling cords began at his ankles then upward across his powerful thighs. To his disgust the ropes continued further upward to his crotch area. There they were somehow positioned behind his balls before finally emerging to criss-cross just above his manhood and tie behind his narrowly tapered waist. Another set of complex rope bindings snaked up from around his waist to form an X-pattern across his chest. The tight rough rope pattern snuggled right under each of the nipples of his chest giving them greater emphasis in his well-formed pectoral area. The entire complex set of bindings ended with a series of tight looping circles around his shoulders, elbows and wrists. Yet, it was the sight of the criss crossing over his crotch area that stunned him the most. It had been craftily arranged so that it managed to obscenely thrust his impressive red Lycra clad basket forward. “Well that was a waste of their perverted time,” he angry growled as he moved to break his bindings. To his shock however, his struggles to rip apart them failed. He yanked again at the ties. To his utter shock, he once more failed to break them. “It is not possible!” he grunted as he repeated his efforts. He trashed about in the ropes again and again until he had exhausted himself.  “What is happening?” He yelled. He was confused by this defeat. Even more upsetting was the headache he still had and a lingering woozy sensation within his body and brain. 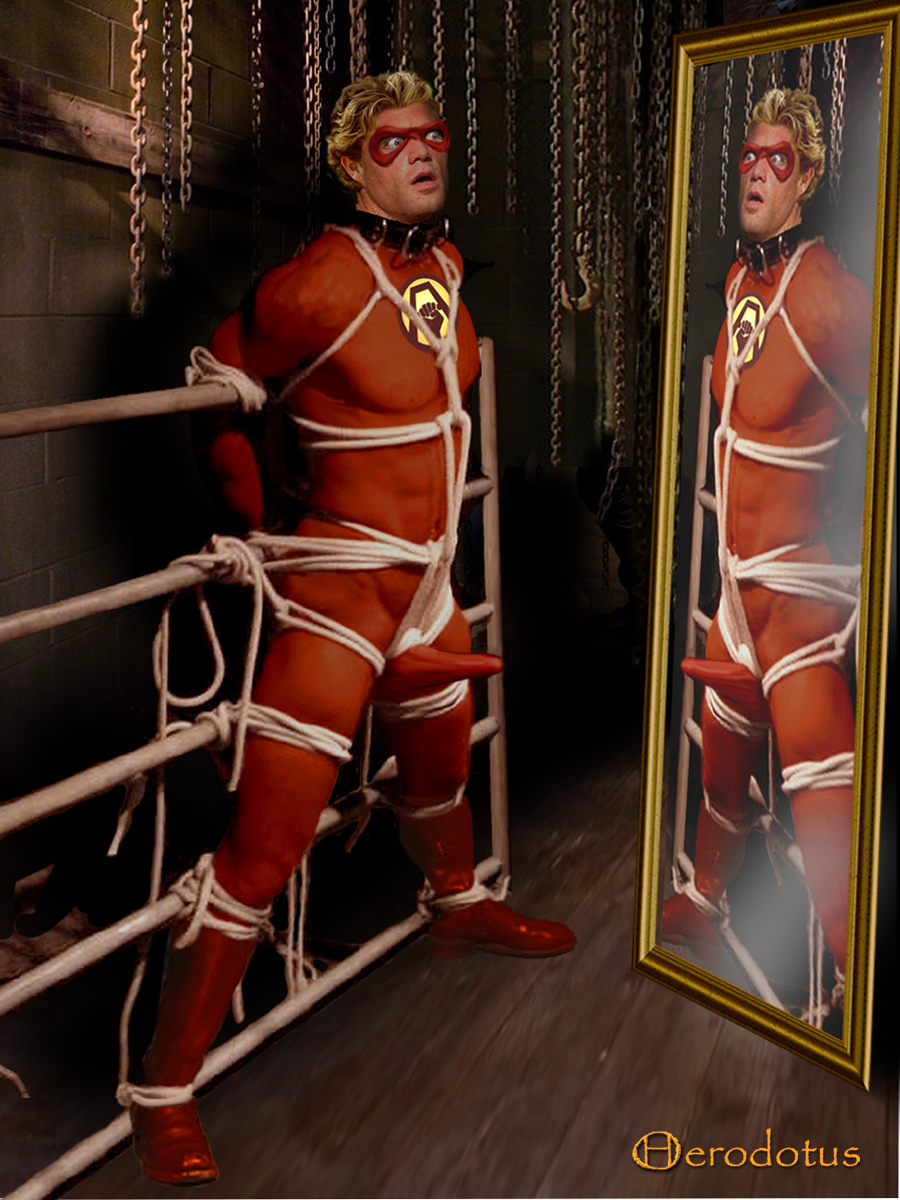 “Not to worry,” a disembodied voice stated from a darkened corner of the room. “Your powers are only temporarily offline. As we suspected you suffer a lapse of strength after you wake up from a …say we say…drunken bender. A hangover makes everyone feel weak. You feel it more that’s all thanks to your alien body chemistry. Once you are fully sober you will be back to super normal. Assuming we let that silly event happen.”

Scarlet Avenger stared into the shadowy corner where the voice came. Figures moved outward into the light. The youthful hero was shocked to see Dr. Doom, Elaine and, to his utter amazement, her granny! “What...” the now completely dumbfounded superhero muttered as he gazed at the malicious trio. He couldn’t wrap his still fuzzy brain around this discovery. “Why can’t I recall things clearly ,” he silently asked himself as he once more struggled to break his rope bindings.

“Please spare yourself that further trouble.” Doom laughed. “I’ve told you your strength won’t work while you still have our…shall we say… remnants of our cocktail inside you.” Upon hearing the word “cocktail ” Elaine and her granny giggled.

“What is going on?” The buff hunk angrily asked.

“Oh please let me tell him,” the old woman said.

“It is a lie,” the Scarlet Avenger yelled at them after she had finished her story.” A foolish and stupid disgusting lie. You three will pay for this,” he shouted as he pulled on his ropes. He would not acknowledge that he had  become drunk and that he had consumed, he shuddered as he contemplated it, male sperm. Yet, he could not get free from these ropes. His failure to break them gave a scary ring of truth to their story. He gazed in a growing panic at his captors. “Tell me you lie,” he softly re-stated with a tone of voice more pleading than confident.

“Show him the tape,” Elaine sighed with indifference to her boss. Doom pressed a button and a screen came down.

As the superhero watched he saw recent events play out on the screen. He observed himself getting drunk. A pained look came to his handsome face. “No…it…can’t…” he moaned in embarrassment as he saw his woozy actions. Then, as he witnessed his “sexual” activities with granny, he felt sick to his stomach. By the end of the movie he had become so ill and disgusted he began experiencing his first dry heaves. As he did so his headache only grew worse. “Nooo,” he sobbed as he bent his head again and again with dry retching. The villainous trio watched as their captive crime fighter’s body shook with each empty vomiting. Finally he finished. He lifted his head to stare at his captors. Gone was any look of his old defiance. “You are all sick,” he muttered. He let his head drop down in embarrassment over what he had done. “I feel ill,” he whispered. He glanced up at the trio.

“We humans have a cure for that sensation,” Doom snickered. “We call it taking more of the hair of the dog that bit you!” With that he pulled out a large pinkish object that consisted of a reddish ball to which a long tubular object was attached.

The youthful hero blinked as he focused upon the object. To his horror he saw it resembled some obscene plastic image of a man's cock and balls. “You sick…” he railed as Doom steadily approached him.

“Oh please,” Elaine’s granny muttered. She quickly walked up to the bound hero and grabbed his crotch. “Open for your granny,” she hissed as she gave the young hunk’s family jewels a hard squeeze.

“AWWWWW,” the Scarlet avenger yelped through his gritted teeth as pain shot up from his balls.  “AAAWWWW,” he repeated as the granny increased the pressure.

“NOW!” the old lady said with a laugh. She violently clenched her hand on the young hunk nuts.

“AAARRGHHHH,” the hero roared as his mouth flew fully open.

Doom had taken the hint and was ready. During this scream he shoved the object into the Scarlet Avenger’s throat.

“Drinky , drinky,” Doom sneered as he squeezed the pinkish ball in his hand.

“That’s right suck the cock,” a kindly voice whispered to him. “You’ll get more if you suck harder on it.”

“Ohta,” he mumbled as he began sucking. The voice was right. The harder he sucked the more liquid he consumed. He happily slobbered  on it. “Gooth…gooth,” he giggled as he puckered his lips around the tubular object.  By now so much juice was flowing into him that he couldn’t consume it all. He felt some dripping out from the sides of his mouth and then drip from his chin. He wished he could reach up to catch that substance and shove it into his gulping throat.

“Suck it. Yeah suck that cock you pansy assed jerk off,” a harsher voice whispered to him. “Gees look at him slobber on the fucking thing. He’s nature cock sucker if ever I saw one!”

Part of the young hero’s brain tried to process those words but the rest was fully f focused on the high he was getting. He suddenly sensed that he was also getting sexually aroused.

“It seems his body  becomes sexually stimulated by drinking,” he heard a female voice say.

“I love it,” another voice chimed.

By now the room had lost all focus for the Scarlet Avenger. He was having a great time floating on a cloud. Slurping away at the thing in his mouth was no problem. The press of his tight red Lycra costume on his cock as well as the ropes under his nuts was amazingly sensual. “MMMMMM,” he mumbled as he wiggled his hips to let the suit and the rope stimulate him further.

“Our boy needs some help from his granny,” a third voice stated.

The young stud felt something rubbing his crotch. It unexpectedly gripped his Lycra enclosed cock and began pumping it .“Yyethhh…” he  snickered as he let that new sensation get him fully erect.

“Oh this one is flying and hot to trot too,” this third voice said.

“Mmmmph-hhh,” the bound hunk groaned as he contently suckled on the fake cock while letting his heroic manhood get “felt up”.  The pressure on his cock felt so good. Still, he mentally told himself he would not cum in his costume. He had disgraced it and what it stood for once but this time he would not give them THAT satisfaction. Even as he was promising himself he would not degrade himself in that way, he was pushing his crotch forward a bit more into it. Suddenly  his body violently twitched. “OOOOOOO…” he yelped as he ejaculated. His boozed up brain intensified the climax. Everything spun in his mind and he passed out to the sounds of their laughing voices. His last conscious thought was the horrific realization he had shot his load in his outfit.

“Gees look at that mess in his costume,” Doom snickered as he gazed at the creamy bubbles that once more formed a large wet spot in the Scarlet Avenger’s crotch. The villainous trio left their captive out cold and slumped in his ropes as they formulated their new plans!

When he awoke he was now naked. In place of ropes he was secured by a series of leather bands. He gazed around the room and saw a hooded figure staring at him. “Who are you?” He asked trying not to show fear.

“Your new teacher, bitch,” the man grimly said as he moved towards the bound hero. He grinned at the captive. “How do you feel?” he asked.

“Sick and my head hurts,” the alien replied.

“No,” the young super hero yelled as he struggled in his bindings. But it was useless. The man grabbed the back of the young man’s head to hold it steady.

“Drink up. You know the drill,” he rasped as he thrust the pinkish colored object past the crime fighter’s lips.

The man simply laughed. “I gotta admit this will be so much fun,” he exclaimed as he feed his “student.”

“Don’t want you to pop a load till later,” the man laughed.