“I taught him that trick too. When he’s drunk he gets pretty agreeable to trainings,” the bodybuilder replied with a sneer as he gently tousled his prey’s hair. “Finish it up pup,” he stated. The superhero immediately complied and lowered his good-looking face deeper into the bowl. His audible slurping noises were music Doom’s ears!

Doom was in heaven but he now he craved more. “Milk him he hissed.

Doom grinned. He took pride in his choice of employing him. The guy was an expert all right.

“MMMM,’ the Scarlet Avenger groaned in heat as he was brought to his first climax.

Instead of pausing, the other man began pumping again.

“Here we go,” the body builder chuckled as he continued jerking off his prey.

Doom watched as the man brought the increasing noisy superhero to eight more rapid climaxes. By now the buff young alien’s chiseled form was streaked with sweat. His eyes were wildly moving while his hands frantically clenched and unclenched. His face was a study in pain and he was biting hard on his ball gag. “MMMMMMMMMMM!” he wailed over and over fighting to break away.

His tormentor had no mercy. He simply laughed and, at one point, he lewdly licked the salty sweat on the young alien’s shoulders. The masturbations continued.

“He’s got one more in him the sadistic former club owner said. “And I know how to force it out of him.” He grabbed a small thin rope and used it to separate and bind up the moaning alien’s balls. “He will be done after this one,” he hissed. “The ties encircling his nuts force whatever is left in them to pop out. When he finished he grabbed the whimpering alien and went to work on taking the crime fighter’s balls cross the finish line

During all this his captive’s muffled screams were loud. Suddenly he threw back his head. He clenched his jaws onto the ball gag. As his knees buckled his body went into a wild spasm. With one last high squeal the Scarlet Avenger’s cock shot its last load into the air in front of him. The body builder released his grip on his captive letting the exhausted and utterly drained crime fighter fall to his knees. His handsome face was streaked with tears. He sighed then, simply passed out falling face forward into the huge puddles of his own spunk.

“Clean him up, let him rest too but, keep him tipsy for the next few days.” Doom grunted as he turned to exit the room. “I promised my gang a sweet performance the day after tomorrow.” 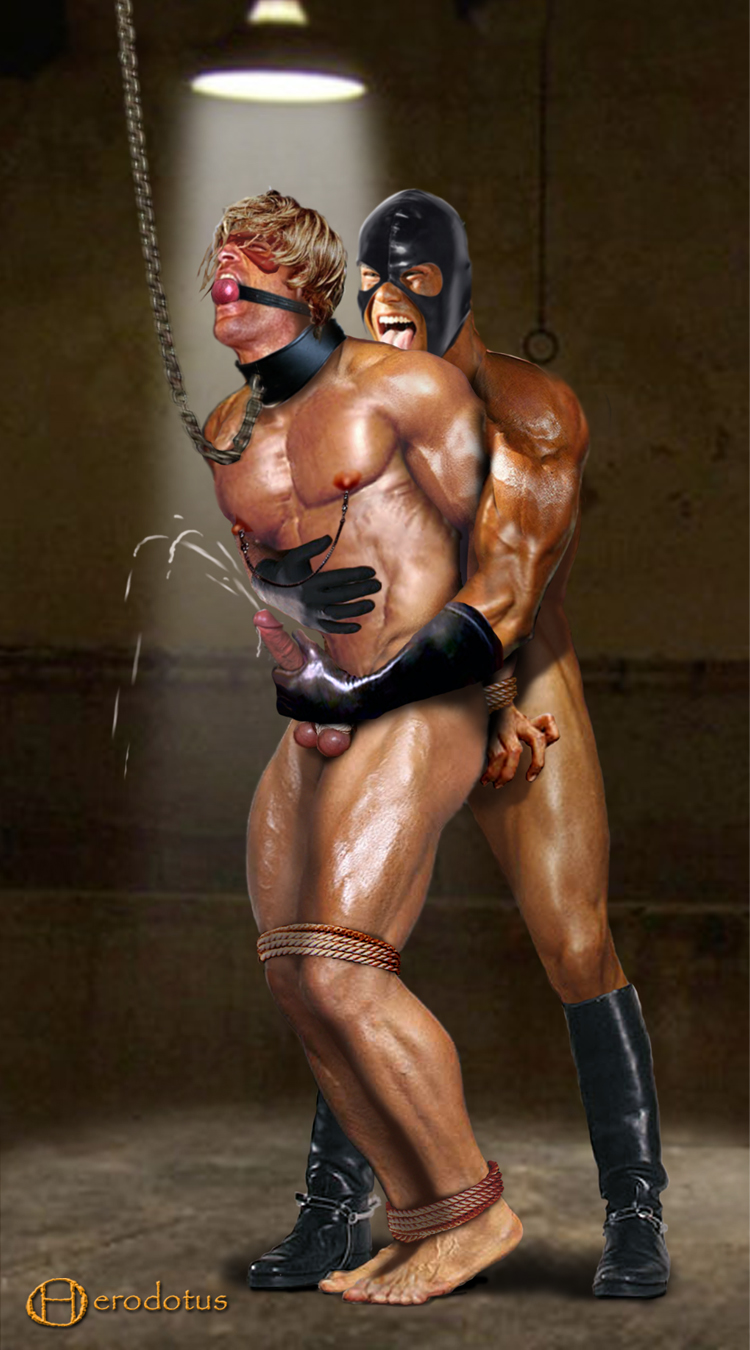