The Telemachus Story Archive
The Scarlet Avenger vs Doctor Doom
Part 7 - All gassed up to blow
By Kyle Cicero (Illustrated by Herodotus)
Email: kysen1@yahoo.com

7. All gassed up to blow 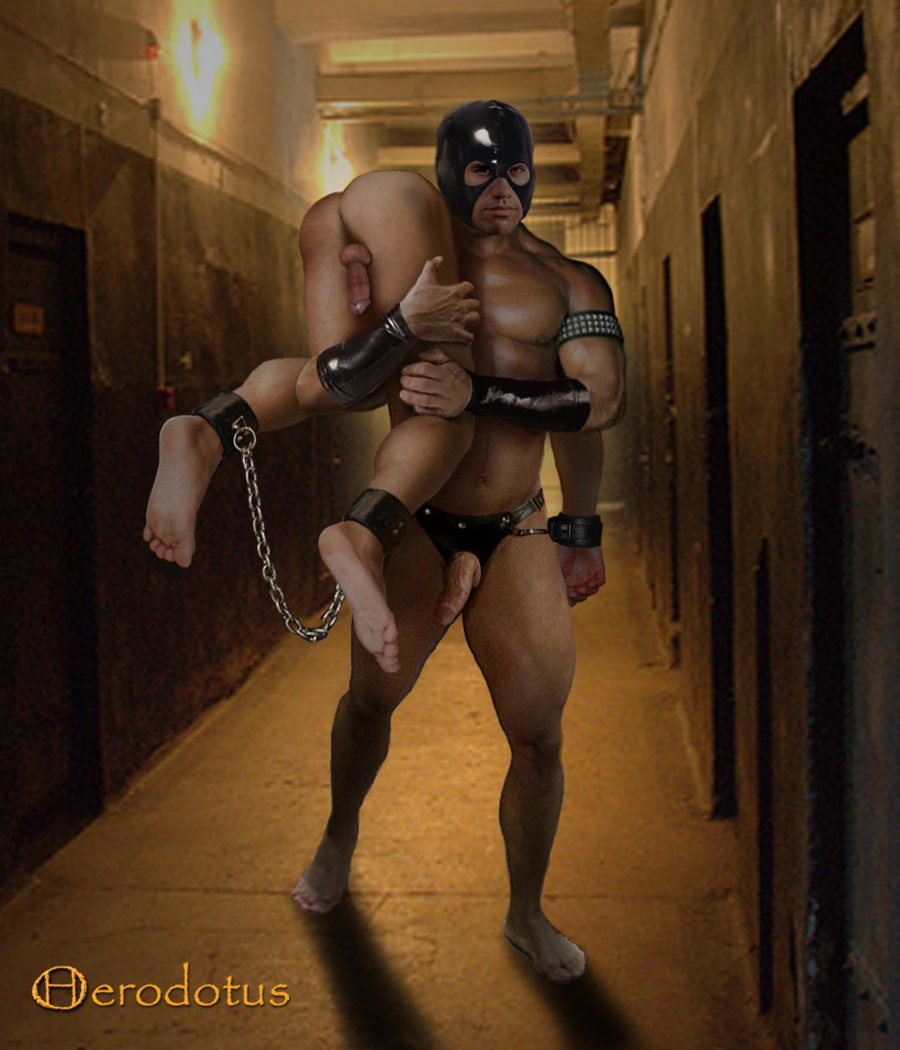 Doom and his associates watched as a hooded body builder carried the squirming Scarlet Avenger to a wooden platform.  “MMMPH…mmmph,” the still slightly intoxicated youthful hero mumbled as he bit down on the hard red ball gag that was still firmly secured to his mouth. Doom had waited to do this next activity until his enemy was close to full awareness. “Hung over and weak okay,” he had instructed the hooded muscle man. “I want him merely tipsy then you may proceed.”

The muscled body builder laid weakened Scarlet Avenger on his back then quickly secured the young buff hero’s wrists and ankles to a set of chains that were affixed to the wall.  Reaching over to press a button the room soon filled with the whirl of machinery.  The chains moved until they had pulled the wrists and ankles of the prone drunk stud. Soon the Scarlet Avenger was positioned so that his arms were over his head even as his powerful legs rose upward and apart.

“Did you know your guts can absorb fluids too,” Doom chuckled to the man.

The body builder then reached up to pull down a long flexible metal tube. The end of the tube was shaped to look like a cock.

“Fuck,” the dull witted henchman whispered as he watched the bodybuilder grease it up.

“MMMMMPPPHHH,” a highly agitated Scarlet Avenger bellowed through his gag. Unfortunately his gag made the protests barely audible. He tried to trash about but the chains held him.

Slowly the other man eased the buff hero’s lower body upward until the latter was positioned downward onto his own shoulders. The body builder set he knee at the back of the scarlet avenger to brace him into that position. Without any other sound than the still protesting superhero, the other man pushed the pipe’s end into the hero’s entryway.

A loud gag muffled “AAAAAAA,” escaped from the now violated young stud. He squeezed his eyes shut as if not looking at his rape might stop it from happening.  The young stud was continually still yelping when a louder gurgling sound filled the room. The pipe shook slightly.

“Bet he flies pretty good after that,” another gang member chimed in to say to his fellow criminals.

As the men watched the superhero’s gyrations slowed. He opened his eyes to reveal that now familiar out-of-it look. His breathing grew peaceful and his well-defined body relaxed.  In place of his prior violent verbal protests a series of contented happy grunts escaped from his gagged mouth.  As the cum-high took hold of him, his addled brain took it as a signal to become sexually aroused. His impressive cock rose up to its full height. The body builder laughed and grabbed it. The criminal ganged clapped and hooted as their once feared foe moaned in a sexually pleasurable drunken bliss. “Mmmmmm,” the bound hero moaned as he thrust his cock in and out of the bodybuilder’s grip.

“That boy loves his fucking,” the dull witted hoodlum shouted. “Look at him bitch on that fake cock.” 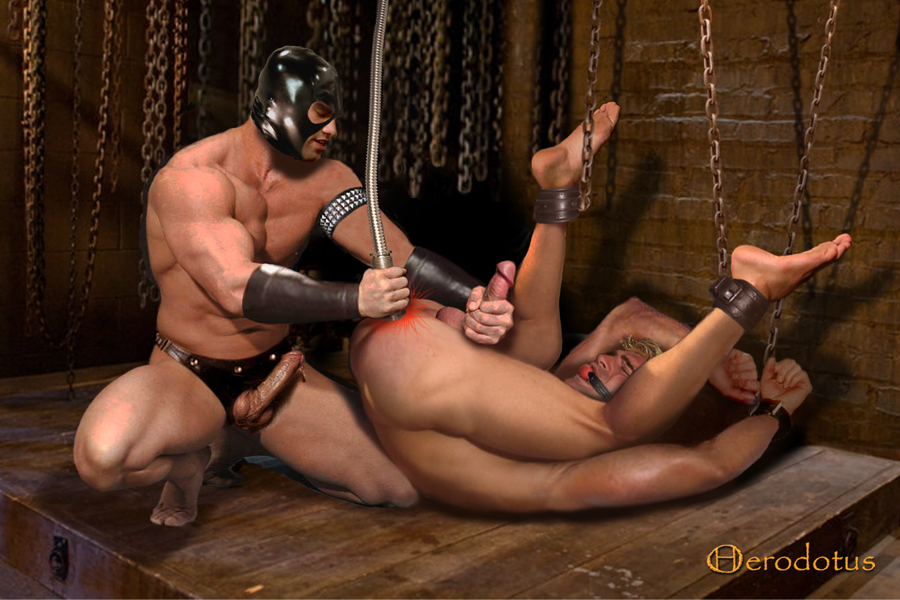 After that things became a blur for the Scarlet Avenger. He hazily recalled being masturbated and fondled by various hands. He knew at some point someone had dressed him back into his red outfit then, being forced to endure another jerk off session while wearing it. Multiple sounds of laughter and catcalls echoed in his head but he could not properly visualize what went on with him after that last event. He only knew that after that point he passed out. He awoke on the floor of the room still partially wearing his hero’s outfit. As he looked down at himself, he saw that the front section of his Lycra Scarlet Avenger’s uniform had been ripped off leaving his chest abdominals and, more humiliating, his cock and balls fully exposed. Some metallic cock and ball ring had been secured on his manhood. He tried to get up but realized that his hands had been secured behind his back. A hooded man stood nearby holding a set of leg chains.

“Took you long enough,” he grunted. “I’ve been here waiting for sleeping beauty to wake up. Come on time to take you to your new home,” he laughed as he pulled the crime fighter to his feet.