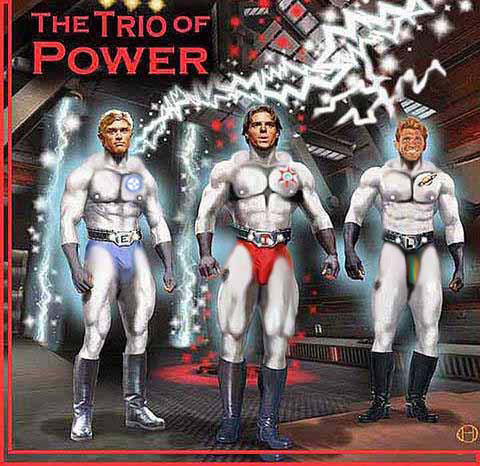 This is a story of three Super heroes’ that are the guardians of the alternate earth called Mutant World, Top Star is the leader of the three, a handsome male with jet black hair, with light blue eyes, a 6 ft 5 muscle bound hero.

Top Star receives his power from Radiation, Atomic, Solar and Neutron beams of power, when he says out loud…

“I’M Top Star!” From close stars and the near by yellow Sun.

When Top Star calls for his power the fore said beams come from the heavens and go directly into a strong and unbreakable like strange metal and unbreakable crystal dome shaped like a six pointed neutron-star on the left side of his muscled awesome well rounded bubble like pec!

When re-powering, the near by stars gives him out standing strength, the ability to fly, his fists can shoot powerful negative or regular powered blasts to disable his foes.

His touch can heal the sick or dying he has a invincibility power utility belt which when turned on puts around him an all powerful force field and makes him very invulnerable.

And last a magnificent android power brain, which enables him to use all his powers to peak performance and is, indestructible!

With his power brain he can maintain his power utility belt force field.

He can complete tasks at light speed he can correct most problems at hand.

With his android power brain he can call upon his great power.

He wears black boots and black gloves cut to each middle knuckle he also wears white colored Lycra tights and red letters in file TS in the center of his black utility belt.

Top Star is vulnerable to attack when he lets down his invincibility force field.

He is also vulnerable to attack if one very powerful or several more power draining Vampires join force against him and he is alone and not with one or both his cohorts.

Top Star like the other two heroes’ are most vulnerable to their sexual areas and their android power brains.

If any of the heroes’ is made to climax 5 times consecutively against their will each climax make them weaker and weaker!

A note to know when stripped completely naked their power domes are either shining bright with power or going dark then black meaning full power drain enabling their invincible android power brains to be re-programmed! That allows a villain complete and total control of them!

If made to climax a 5th time the hero will be rendered completely powerless but it is very hard to make one of the heroes’ climax a 5th time usually but a powerful Power Draining Vampire or Vampire’s may be smart enough to make it easier!

Pure Energy Man receives his power from star beams that go to his metal and crystal dome in the shape of a four-pointed pulsar-star.

Two colored stars power him a near by blue star and white star give him huge amounts of power when needed.

He re-powers when he says with strong command:

Pure Energy Man also has awesome super strength the ability to fly like his brother’s one of his many weapons is a negative energy web or webs that come from his fists that surrounds his foes and takes away their power!

He can also re-power drained machines he can move faster then light his energy can heat frozen area’s within a fifty mile square.

Like Top Star he has an android energy brain and with it he controls his powers, he is computer wise and runs the security units at the superhero home and security watchtowers.

Pure Energy Man is vulnerable when surrounded by complete darkness it drains away his powers very rapidly and stuns his android energy brain making it respond slowly an act abnormal.

Pure Energy Man like Top Star is vulnerable to attacks from one very powerful or two or more power draining vampires.

His Lycra tights are also white in color he wears dark gray boots and gloves with the middle knuckles cut away.

Like Top Star he has an invincible three-inch in diameter rare metal and crystal dome shaped like a four pointed pulsar-star on his very muscled left pec in which he receives his power.

And also like Top Star in dark blue letters inline on his right pec (PEM) short for Pure Energy Man.

Our next hero is Lightning Strike a 6ft 3-inch muscle God with light red hair and no different flakes in those pure green eyes.

Lighting Strike receives his power from this planet and others that are in orbit around this Sun.

The very handsome muscular Lightning Strike can attack his foes with great surges of negative or regular electrical power he can regulate the power strikes as not to kill unless it’s the only way to proceed!

Like his cohorts he has a rare invincible metal and crystal dome upon his huge bubble like left pec in the shape of a planet with many rainbow colored rings going around the beautiful planet shape dome.

And like his cohort’s when he wants to fully re-power he calls out loud with strong command: I’M LIGHTNING STRIKE!

Lightning Strike has half of each of his cohort’s powers and others, which they do not have!

Lightning Strike is a very extremely handsome muscle bound immortal and a stud hero male looking like he is a in his early 20’s adult but acts like a teenager at times!

He tots a 7-inches around and a cut 10-inches long penis when fully erect!

He has super strength and can fly at light speed he also performs different task that Top Star and Pure Energy Man cannot!

Lightning Strike wears black with waves of rainbow colors Lycra briefs and pure white tights he has black and rainbow colored utility belt and gloves cut to the knuckles as well as his boots are too!

This so ends my introduction.