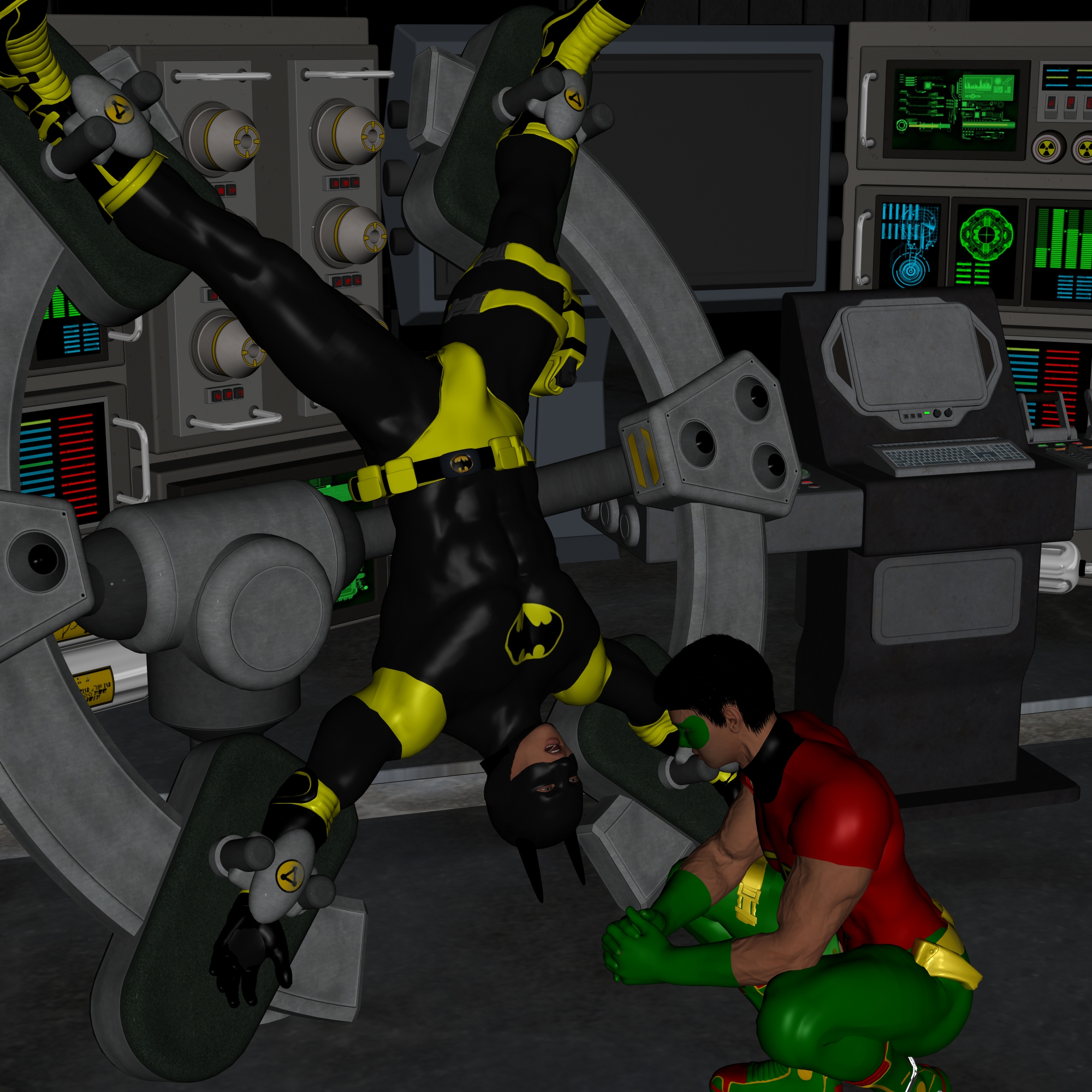 The new Robin came into his lab a few minutes after the knockout has had been evacuated. He stood towering over Batman, with a smile on his face, thinking to himself, "if only you weren't such an arrogant ass, you wouldn't be laying here helpless."

He quickly moved the black clad hero to the same table that had held Robin not long ago. He knew he had now defeated the great team of Batman and Robin. He was now Robin and would soon control Batman as well. Secured safely in the table Robin pushed a button and watched the table rotate. When it had finished he smiled to himself, "There you go Batman that position should be most comfortable for you, after that is how bats sleep.

Robin crouched in front of the bound Batman, slowly raising something to the sleeping hero's nose. Whatever it was brought Batman out of the sleep he was in. He jerked at first finding everything hazy and not able to see clearly. He soon realized that he could not move and was bound to something hanging upside down.

As things became clearer and he began to focus, he could now see his trusty sidekick, the Boy Wonder, Robin kneeling before him. He had found him and had come to the rescue.

"Robin, get me out of whatever this is! We need to find out who gassed me and what they want."

"Robin, what the hell are you babbling about, get me out of here now and let’s move we don’t have time for this, whoever did this could be back soon."

"Bruce, you just have no clue do you?"

"Bruce, since when do you call me Bruce, and clue about what. Get me loose and we will talk about this later."

"You are right we will talk about this, but not later, very shortly, Robin said as he left a furious Batman.

A short time later the new Robin returned to a fuming Batman, with someone else in toe. Batman could not believe what he was seeing. "How is there two of you? What is going on here? I want answers and I want them now!"

"It seems to me you are in no position to demand answers. It seems for a change you are the one that is in trouble and I or should I say we are in charge."

"That will be the day you are in charge of me! And who is this We?"

Batman man said the wrong thing, it pissed the New Robin off and he delivered a hard swift punch to Batman's midsection. “Shut up for once. As to who we are, we are both Robin, and we are both sick of listening to you, we are done. Things have changed and there is a new order and new person in charge here now."

"Come on let me go and let’s talk about this."

"Time for talk is done." 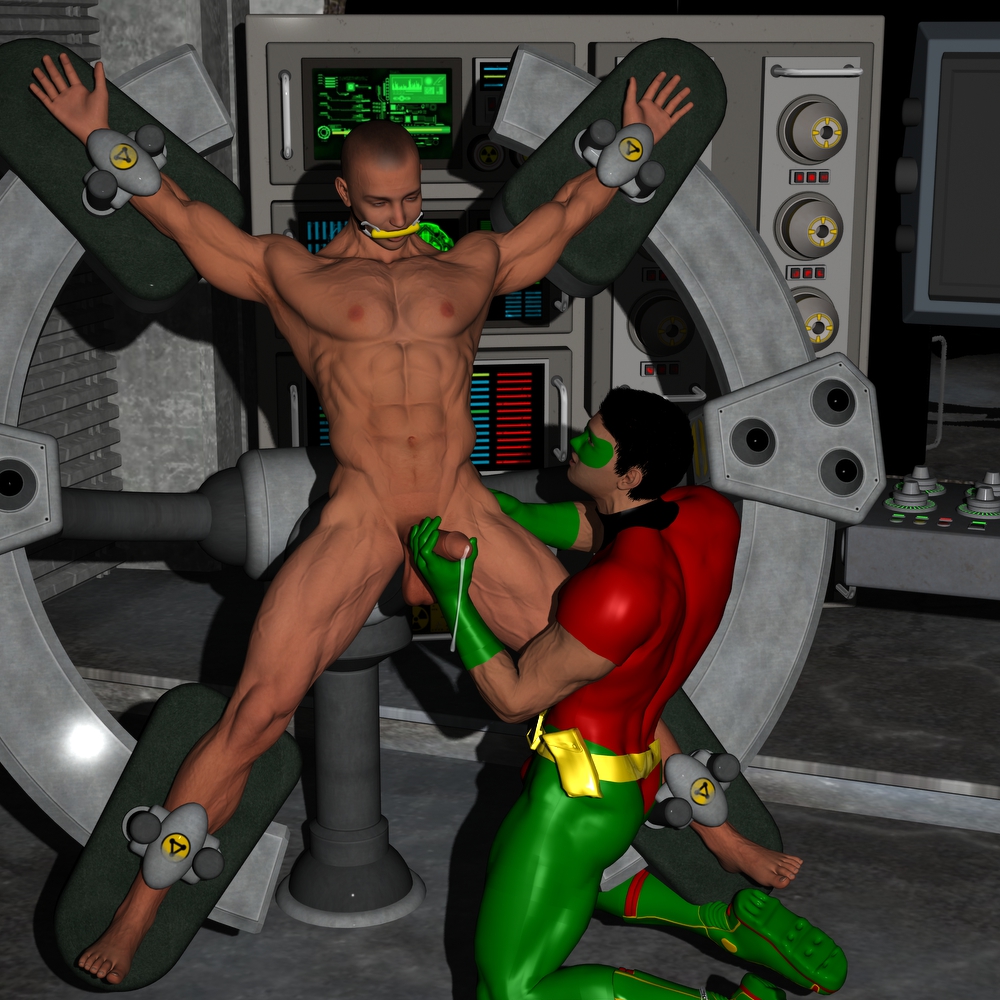 Both of the Robin’s moved in to strip Batman of his uniform. They were both anxious to see the hero naked, and also to teach him a lesson, a lesson he would never forget. They released him from the clamps holding him one appendage at a time. Even if there was some kind of trouble the two of them together can handle Batman.

When they started to strip him of his uniform, Batman could not believe what they were doing to him. There were so many questions flying through his mind, who was the second Robin? How did it happen? Why were they doing this? He was more than furious; he was not used to being treated like this, neither as Bruce Wayne nor not as Batman. He needed to get himself out of this and figure this out.

He tried reasoning with them, and screaming but nothing he said seemed to stop the two. "Listen Batman, you are not in charge here anymore, you never will be again, so its time you got that through your thick head, your days as Batman are numbered. You are done!"

"You think you can take this suit and wear it and it makes you Batman? Think again, I am Batman, there will never be another one, so take the suit, and play your little game. I will get out of this, and find you, when I do you will pay no matter who you are? If you are the real Robin or not!"

"Yak Yak Yak, you just don’t understand, but in time everything will be clear, right Robin", the new Robin said to the original Robin.

"Crystal clear, he will see everything soon."

"The only thing I am going to be seeing is kicking your two asses and putting you behind bars. Now when you two come to your senses you can let me go!"

"You know bro, I am sick of hearing him, what do you say we use this little thing on him?"

The new Robin smiled at the old Robin as he smiled saying, "Go for it!"

The old Robin, stepped forward inserting the gag he was holding into Batman's mouth, to silence him. All the hero could say now was "mmmmrrrppphhh." But it was clear he was as mad as he ever had been. It didn’t take long for the Robins to have Batman stripped enough to move forward with this next part of their plan.

Both Robin's had a plan for Batman, but first they both wanted to have some fun the cocky over confident ass that had always done things way. They had him naked now, and were going to teach him something new. "Bruce, I know this is something you are not used to and it will be new for you, but it was new for us, just a couple days ago and I am sure you will become as addicted to it as we have become."

Batman jerked trying to free himself from the table as fear seemed to build in his eyes. One of the Robin's took his green gloved hand and cupped Batman’s balls in his hand as he began to sexual stimulate him. At first Batman did not react, he knew he would not. However as that Robin began to lick the cock head of Batman his cock began to expand as it filled with blood, beginning to come to attention.

Robin now started to suck in earnest on the massive piece of meat in front of him. It was huge to say the least, but Robin was up to the challenge, taking its full length and girth in his mouth. Robin was a true cock sucker, he love it, he was good at it, and knew exactly what to do to pleasure a man. Batman was definitely enjoying this; his body was giving into what was happening even if his mind was trying to say no. He was a leaker, beginning to leak large amounts of precum as he fought the orgasm that Robin was after.

Batman's head went back as he let out a small audible groan. The Robin in front said, "I think old Bat's likes the attention he is getting from his sidekicks!" 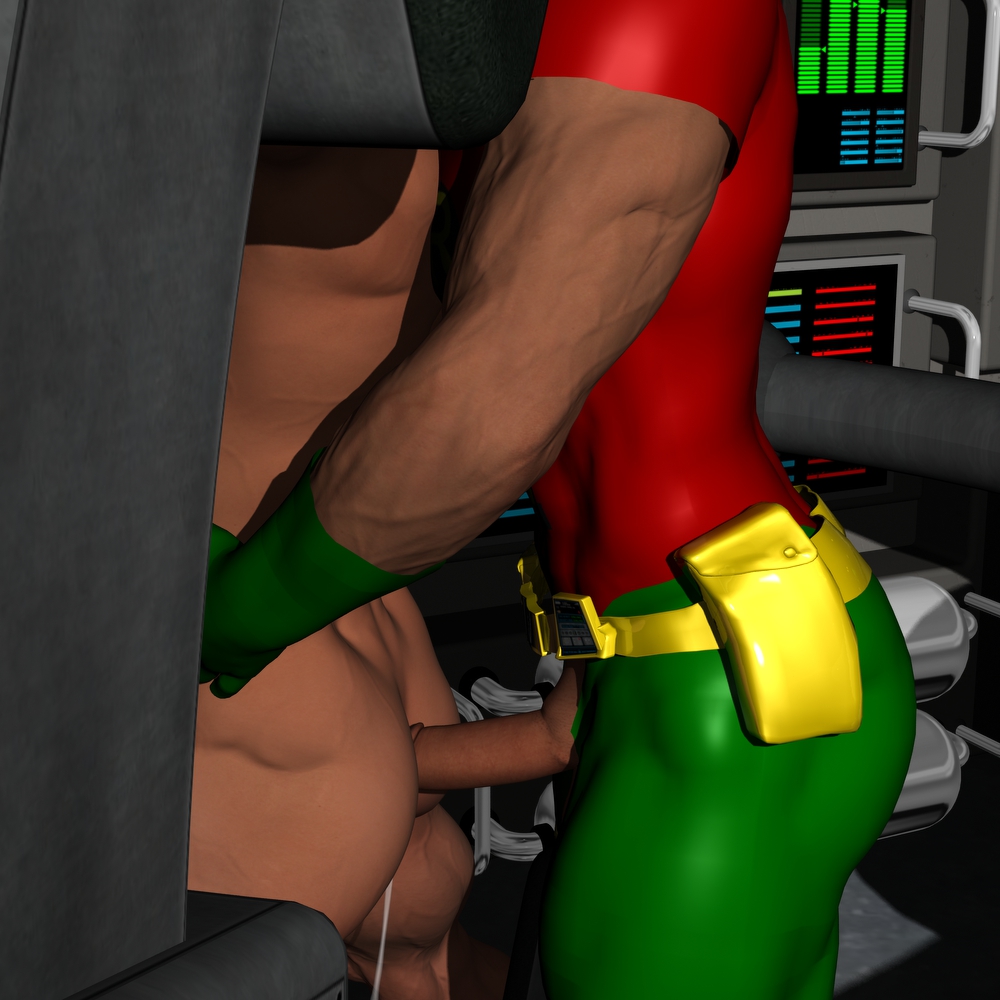 "We both knew he would enjoy it! Robin was now giving his former boss a full on blow job, doing all he could to for the hero to show his pleasure. The other Robin was now also fully erect standing behind the bound hero. He wrapped his arms around Batman, beginning to play with his nipples and body, adding to the excitement Batman's body was already feeling.

Suddenly Batman's eyes flew open in fear and shock; he felt something he had never felt before. Robin's well lubed cockhead was pressing at his anus muscle trying to enter someplace that had never been entered before. Robin leaned into Batman's ear, "It is going to happen, I am going to pop your cherry, there is nothing you can do to stop it, so either take it like the man, the Batman you are, or whine and cry, choice is yours, but either way it will happen."

Batman with fear in his eyes barely had time to decide or react before Robin, gave a small thrust forward, forcing his cockhead inside the hero with a pop. Batman saw white as he screamed into the gag, never having felt this before. After a few seconds of things settle Robin gave another thrust forward with his hips, this time inserting the full length of his cock inside Batman.