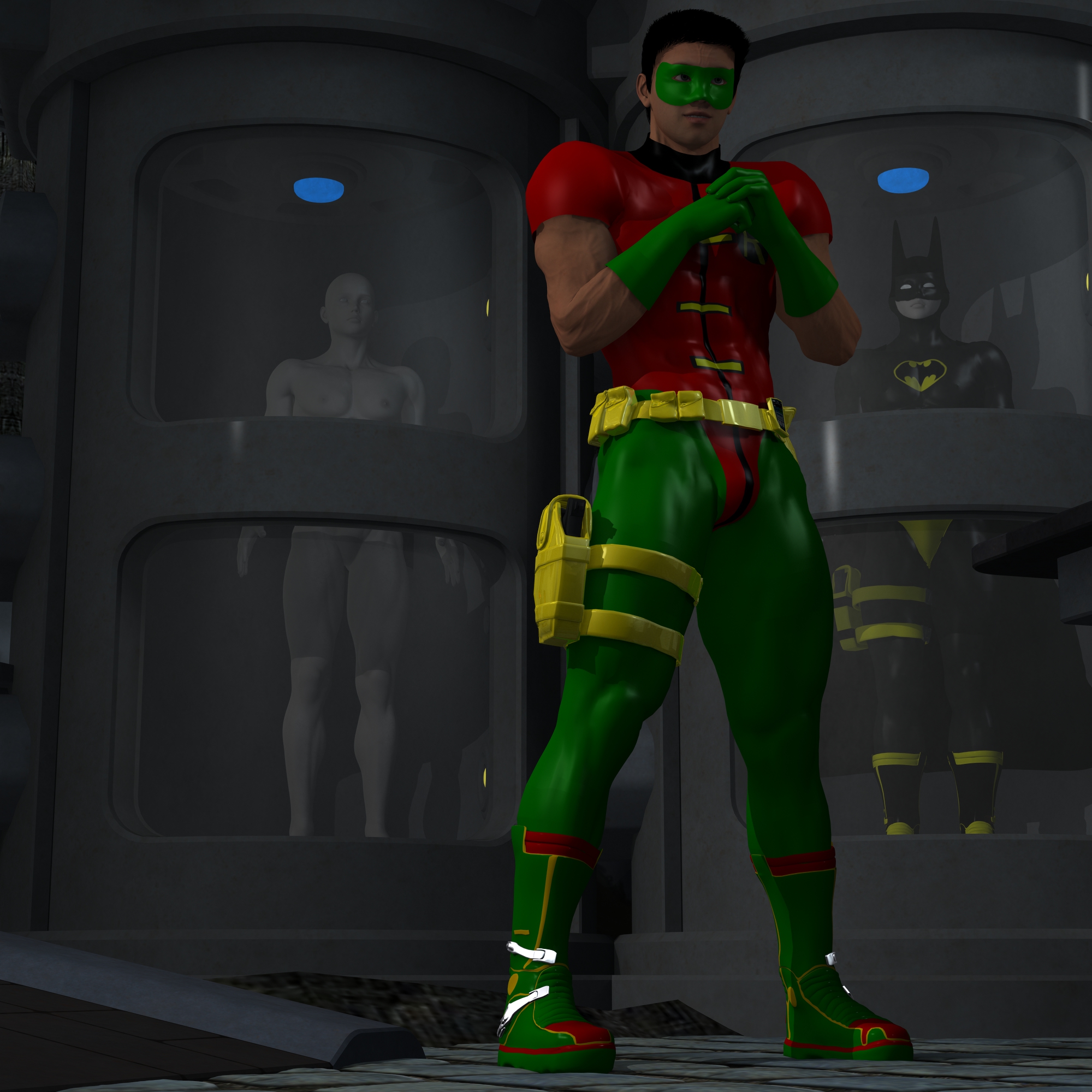 At some point Dick managed to pull his attention away from his admiration of Batman's suit. The computer was still working as he hit the button that opened the pod that held his Robin suit. The seal on it gave way as the door opened with a whoosh. Every time he was to change into Robin he couldn't help but admire the suit and what it offered. The power and prestige it offered.

It didn't take long for Dick to shed his street clothes, soon standing there naked. He was glad Batman let him bring in a big mirror; he told him it was to help him get dressed, but the real reason was for him to admire himself and his toned body, which is exactly what he was doing now. This was something he didn’t get to do when Batman was around, then it was always rush and hurry, get going, no time for the fine things in life.

Once he had his fill of his own body, he began to dress as the hero he was. The first thing he put on was the mask that kept his identity a secret from the rest of the world. As he slid it over his eyes he felt himself becoming Robin, he also felt something else, he felt his cock begin to swell and come to attention. It was the same every time, it was a feeling he would never get tired of. The feeling was amazing and almost electric.

Once the mask was in place he took the under suit, slipping it on in one swift motion. He couldn't help but touch himself and feel his body now covered by the slick form fitting, skin tight suit. He gently ran his finger tip up and down the fabric; however he knew he couldn’t continue he needed to get moving. He grabbed the trunks next slipping them on his legs pulling them up around his waist and into place. He reached underneath them putting his cock, his hard cock, into the exact place it should be, to show everyone just what kind of man he truly was.

He grabbed the bright green gloves, followed by the boots, the boots he himself had designed to complement the suit and provide him the traction and stability he needed to be a hero. The last thing was the utility belt, with all the gadgets he used and the holster with his weapon. He rarely used the weapon as he relied on his strength and wits rather than weapons to defeat his foes. 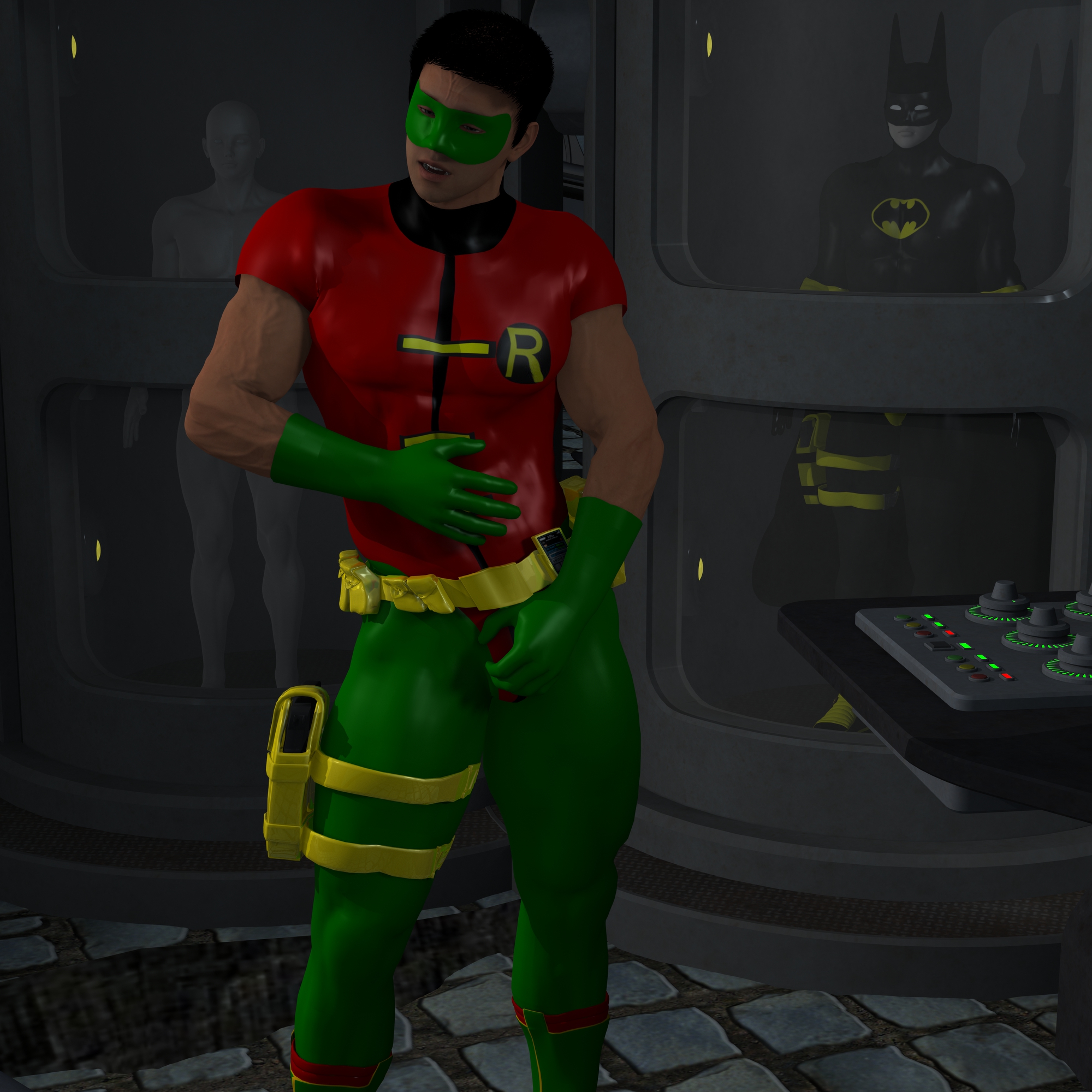 He was now fully Robin. Looking in the mirror he couldn’t help but think, what a stud he was, who wouldn't want to be him. He was hot, sexy and strong and he knew it. He was lost in lust for his own body.

There was no doubt how this suit and being a superhero made Robin feel. He was no longer Dick he was now Robin. No one else knew who he was with the exception of Batman. He loved the way this suit made him look. It was skin tight, showing off ever curve and muscle in his well-cared for and trim body, a body he worked hard to keep in tip top shape.

It also got him the attention of women as well as men. He liked that men wanted to be him and that women wanted to be with him. Robin loved to show off to everyone but the women in particular. This suit and being Robin helped him do that. He could not help but stop to admire himself for a minute longer.

The reaction was the same every time he was in it. He knew it was only a suit and had no real power but still it made him someone else. It made him a hero. It made him confident, sexy and even better looking, as if that were possible. The suit aroused the young man, he could feel it. His left hand soon wandered down to grasp his ever hardening manhood, contained within the suit and shorts.

The touch of his hand to his member sent a surge of every though his body. His gloved hand could barely wrap all the way around his hard cock as he unknowingly gently stroked the full length of cock, teasing it and making it even harder. He prided himself on his cock, he thought no one had one that could compare to it, and it was just magnificent in his mind at least.

Yes this is what being a hero is all about, he thought to himself. At the same time his left hand was massaging his cock his other hand switched from caressing his eight pack abs, which were also perfect and hard, to his hard bubble butt. Whenever he was in the gym working out, Dick spent time on his abs, they were also something people looked at, and they were front and center when he was wearing his Robin suit.

His hand now kneaded his rock hard hero ass. With the touch to his cock and ass at the same time I sent wave of energy throughout his body. Robin let out a sigh in his reverie thinking about the two things Robin considered his second and third best assets beyond his cock.

As he was lost in his lust for his own body, the computer sounded that it had results for the hero. Pulled from his stupor he had a though, maybe after he had this wrapped up he would go out and impress some of the ladies, it would be a treat to see the cocky hero in person. Who knows maybe he would even let one come home with him? Once he cleared his head he looked at the screen. Now should he call Batman or not??? 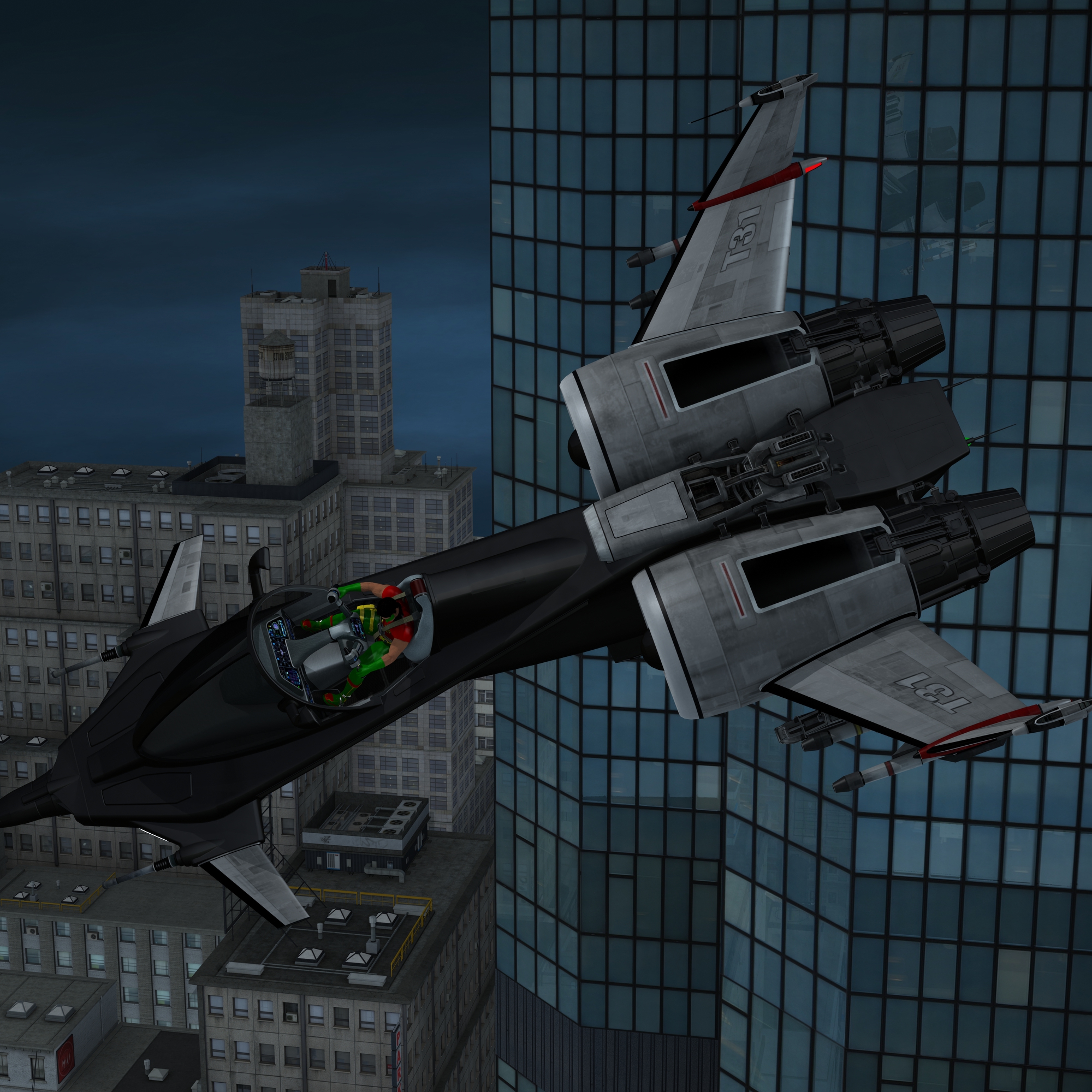 What the computer spit out was not a whole lot of help, however Robin figured he could handle this without his partner, why bother him, he was half way around the globe. He decided to take the jet rider, it would be the fastest and besides he felt like flying today. He climbed in, strapping the belts tightly across his chest. He hit the buttons to fire up the powerful engines bringing them to life with a loud roar. He nudged the throttles up causing the jet to slowly lift off vertically until it reached the top of the cave.

Once it reached the top it went through the ceiling of the cave just like he did with the motorcycle earlier. Once clear of the Bat-cave he slammed the throttles to wide open. He was supersonic in a matter of seconds. How he loved being in this thing. Before heading down town he could help but take a slight detour out over the ocean. When Batman was around he dare not do this, but today was safe. He spent a few minutes doing some aerial tricks with the jets, doing dives and roles, just having fun at speeds above sound.

After about twenty minutes he figured it was time to get down to business. It only took a couple minutes and he was jetting over city center. Again he couldn't resist playing before getting down to business. He buzzed a few of the office towers and ran low, up and down some of the surface streets. This all fed into Robin's huge ego. 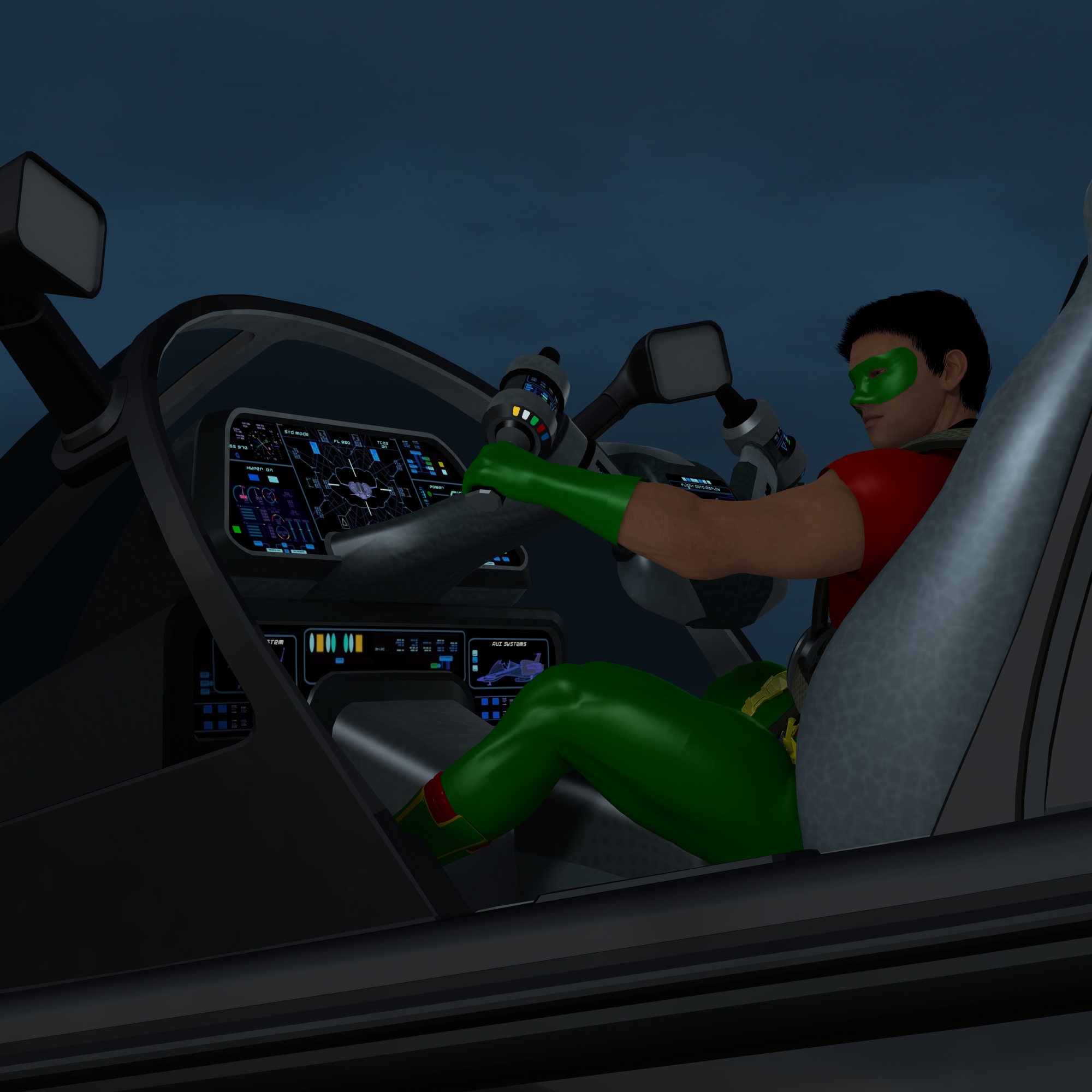 Robin decided it was time to go to work. He could always play again later after he was done. He moved over to Main Street where all the activity was supposed to be. He made a few low passes over the area, to try to assess what was going on, but that really didn't help a whole lot, it seemed pretty quiet and the city look deserted, the police even seemed to be gone. How could that be in a city this size?