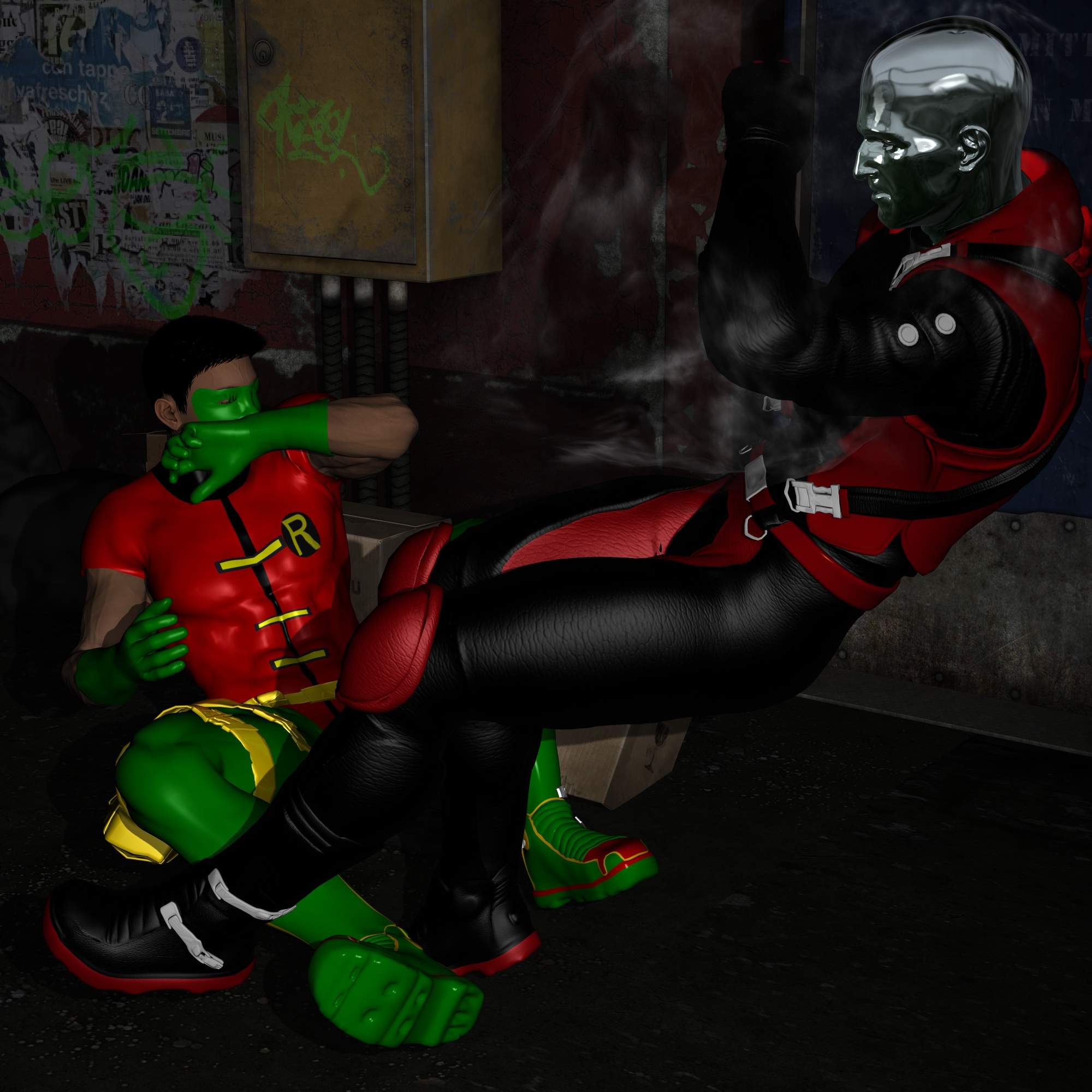 Robin gathered himself enough to reach into one of the pouches on his utility belt. He pulled out a round ball like object squeezing it in his hand and throwing it at the shiny stranger who was again coming after him. As his did all of that in on quick motion there was a small flash and a large puff of smoke directed at the stranger.

It was enough to knock him backwards, distract him and knock him off balance. It gave Robin the opening he needed to try and put some distance between him and metal head. He quickly scampered to his feet, which maybe wasn’t such a good idea as he found out he was still a little dazed and disoriented from the blow to the head he took.

H stood there for a couple second trying to gather his bearing before he turned to make his escape. This would be the only chance he got to retreat. 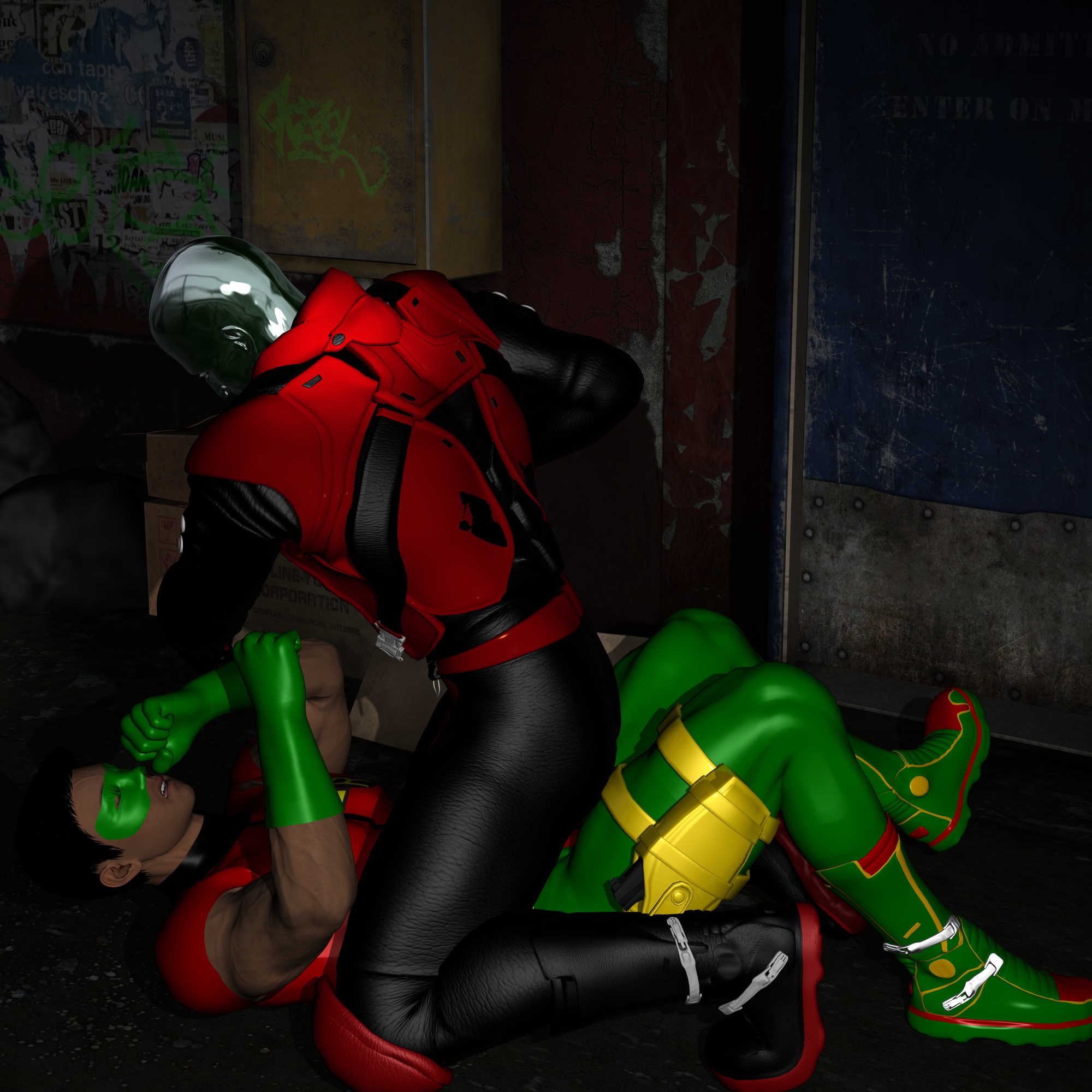 The time it took for Robin to get his balance and get himself together was more than enough time for the man made of metal to recover from the gadget Robin had deployed. It had little to no effect on him, which was the first time that had happened. All it really did was surprise him and caused him to stumble backwards.

He grabbed Robin by the ankle bringing him to the ground again. It took Robin totally off guard, as he was not expecting it or ready for it. He hit the ground like a ton of bricks. What made it worse was the speed of the metal man; he was on top of Robin in an instant.

Robin could hardly react to defend himself at first. The man was on top of him straddling his waist pressing down on Robin's trapped manhood. A manhood that was already worked up and highly aroused from the fight and confrontation. He knew it was odd but this was the type of thing, or one of the things that got Robin off.

Between the weight of the man pressing down on his groin and Robin squirming to get away it caused his cock and ball to grind against the ass, if it was an ass, of the metal man. It was driving Robin nuts, he knew he had to fight but his mind was wrestling between defense and pleasure not to mention the fact he was being aroused by someone other than a sexy, beautiful women. He couldn't comprehend what that was all about, there was no way another male or male figure could turn him on like this.

Finally his senses kicked in, he needed to get the hell away from this thing and defend himself. He tried to kick and punch at the man, but it was too late. Again the delay gave him time to start the offensive attack on Robin's torso and head. He was to strong, not to mention the head start he now had.

Robin withstood and took punch after punch, blow after blow to the head and torso. It was grueling and punishing to say the least on the young hero. This was something new to him, something he had never ever experienced before. Then the metal man landed the crucial blow. 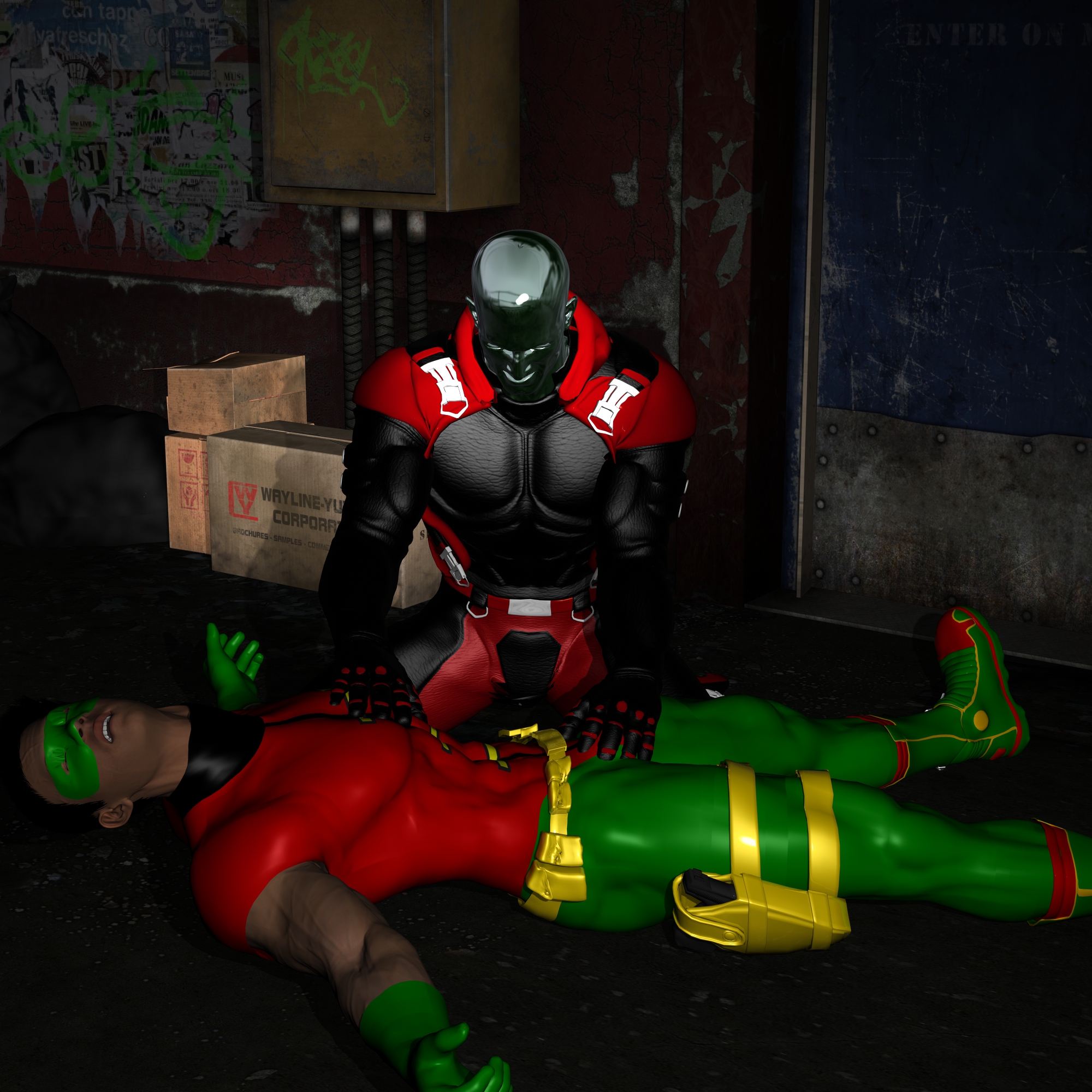 The last blow left Robin lying unconscious on the alley floor at the mercy of the thing that had attacked him. He was helpless. The metal man or robot, whatever he was, now knelt best the fallen hero on his knees. This creature acted human, the only difference was that he was made of some kind of metal.

He even seemed to display emotion and feelings, which was amazing. He seemed to be hovering over Robin, observing him, trying to take him in. He just looked down at him with a small mischievous smile on his face. He had had plenty of contact with the hero lying before him in the last couple minutes.

He may be made of metal of he did have feelings and he could certainly feel how Robin's cock reacted against his ass. To say the least, it caused an equal reaction within the metal man. Now that he had defeated Robin it was almost as if he was afraid to reach out and touch him. He slowly lowered one hand to the prone hero’s chest gently caressing his massive chest.

The touch clearly had some effect on both of them. The metal man took in a deep breath trying to compose himself, at the same time even though he was knocked out Robin let out a small low groan of approval when his opponent made contact with his ever sensitive nipple. The metal man seemed to take that as a sign of approval.

He moved his other hand to the crotch and cock of the man lying before him. First he just let his fingertips touch the fabric that covered the prize below. The gentle touch caused a physical reaction causing the hero's cock to grow. The metal man continued his examination of the hero's manhood. As it continued to grow both men were clearly experience pleasure again. Robin continued to let out a low moan at times and even stir slightly, while the metal man continued to caress his cock, enjoying seeing what was happening allowing his smile to broaden. 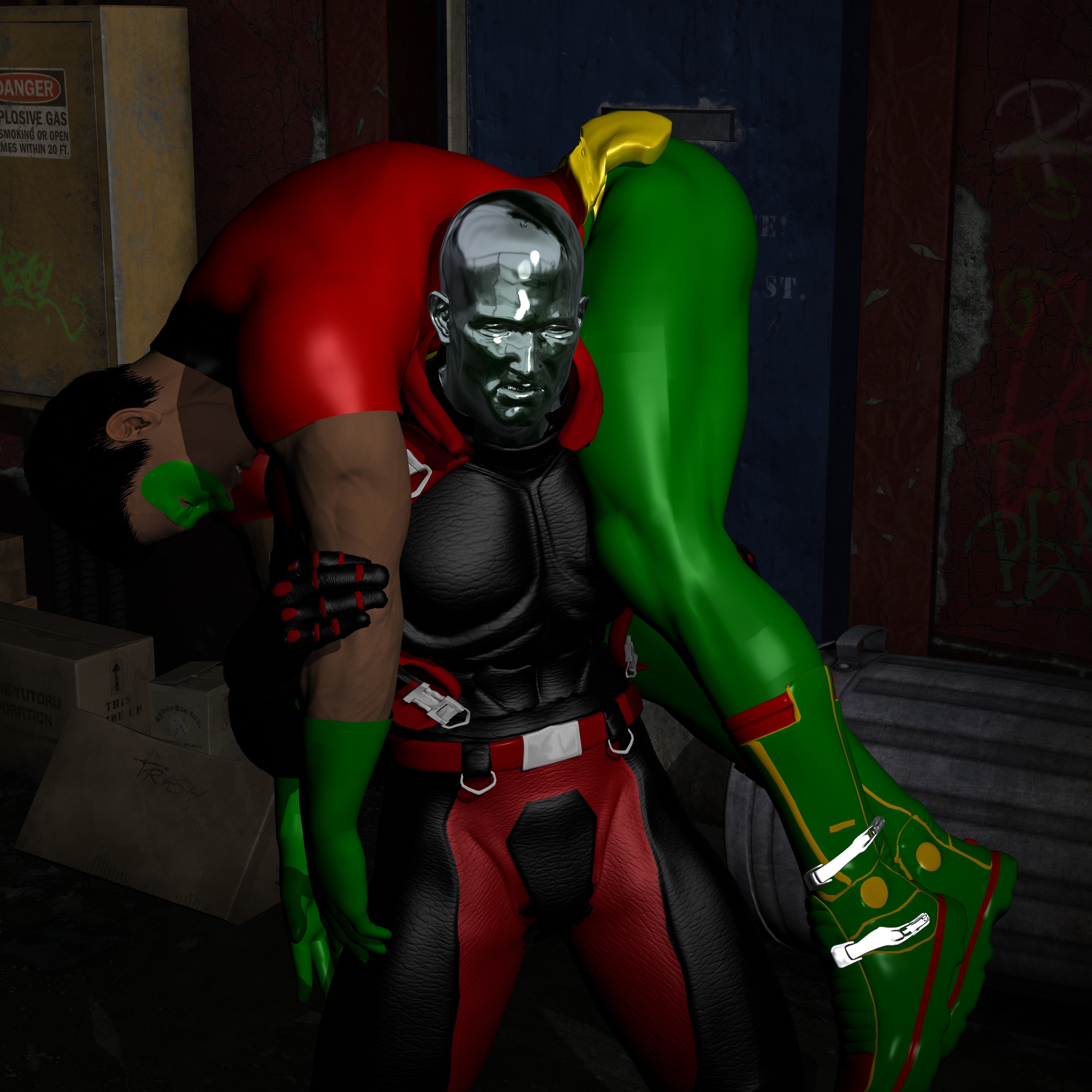 The silver skinned villain was clearly enjoying himself with his ministrations on the fallen hero. He would have loved to have gone further with what he was doing, and for that matter based on the moans coming from the knocked out Robin, so would he. However that was not part of the plan, at least for right now. He was on somewhat of a time table and had to get moving or he would be in trouble.

That didn’t seem to matter for the moment, as he decided the delay was worth it. For a moment he thought of stripping the hero naked and having sex with the human before him. He really had to hold himself back; perhaps he would be rewarded with that at a later time. He instead continued to stroke the hero's cock now having full grasp of it through the fabric of the suit.

Suddenly the metal man snapped to attention. His hands left his foe's body. It was as if he just received some kinds of orders and got down to business. He stood up over the clearly aroused hero taken him by the head and upper body scooping him up and with ease putting him over his shoulders, heading off into the darkness of the night.