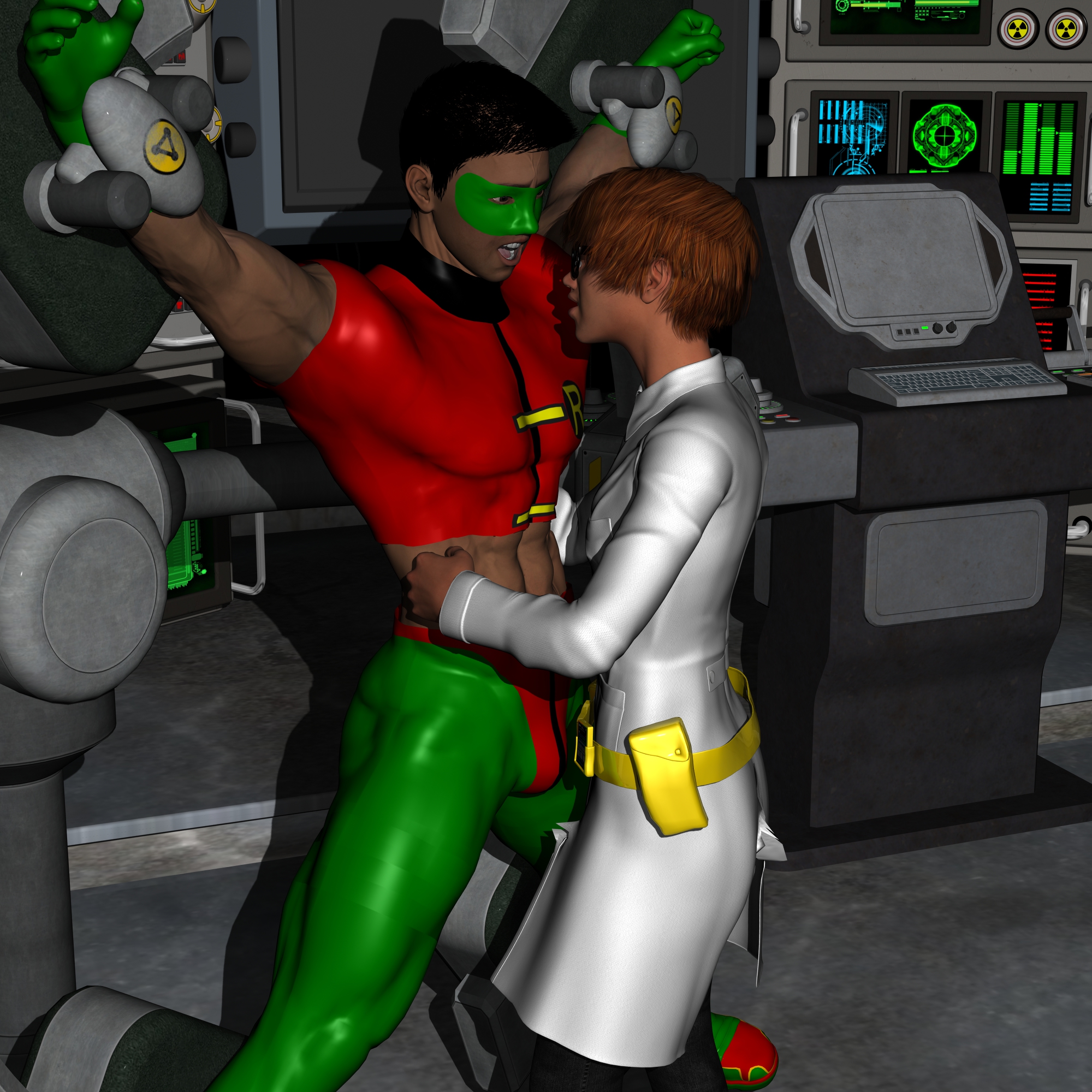 Robin's warnings fell on deaf ears. It was time to see what was under Robin's uniform. The Doctor's slight hands first reached for the holster and weapon strapped to the hero’s right thigh. His fingers made first contact with the inside of the thigh at the crotch level. There seemed as if there was some kind odd energy transfers between the two them at that point. The Doctor took in a deep breath trying to deal with the feelings he was having, as Robin also jerked at the touch. He was trying to get away from it, yet at the same time felt a massive influx of pleasure.

The Doctor slowly ran his finger-tips ever so gently down the inner thigh, which sent a shiver through Robin, causing both of then to react, until he reached the clasps that held the holster in place. He could barely manage to get them open, but eventually did, allowing the belt to fall away into his hand. He took it placing it on the table.

"You will have no need for your weapon any longer, at least not this one." He said as he coyly smiled at the hero. Next was the utility belt that was wrapped around his waist.

Robin had stopped his protest for some odd reason, trying to regain his composer and get himself under control again. The Doc took his hand; running it across the washboard ab muscles of the hero, again eliciting a reaction from both. His hand went to the buckle quickly releasing it.

"I always wondered what sort of gadgets ended up in your and Batman's utility belts, I will have to take some time to explore that later." He took the famous utility belt and put it around his own waist, adjusting the buckle so it came close to fitting.

Robin could feel his blood begin to boil in anger. "How do I look Robin? I think it goes better on me, don’t you?"

"Get that off now, that belongs to me! You have no right wearing that. Someone like you would never ever be a hero!"

"You mean someone like me, as in someone with a body like mine and someone who was a nerd as you so aptly put it before? That's what you mean right Boy wonder?"

"Yes, I mean look at you and look at me, what could you do to stop or defeat anyone, you have nothing and then look at me!"

"Do I need to remind you genius, who is standing here free and who is bound and helpless?"

That shut the cocky hero up! The Doctor had got the best of best of him and what was much worse is that he was right. Robin was at the mercy of this little nerd.

The Doc now stepped directly in front of Robin. "Time to get rid of this pesky uniform and see exactly what is underneath."

"Don't you dare touch me; you are not taking my uniform from me."

"Don't be so dramatic Dick, there is no one here to impress by putting on a show, we both know what I want happen is going to happen." The little nerd said as he grabbed the bottom of the shirt, pulling it up about half way. To get it all the way off he would have to either cut it, which was not an option or release Robin's arms.

"Now Dick, to get your shirt all the way off I need to release your arms. You have two options and I want you to consider them carefully. One when I release the pads you can cooperate, take the shirt off and return your arms to the pads to be relocked or you can resist and not cooperate and well, let's just say things will get somewhat uncomfortable for you. The choice is yours. What will it be?"

"Just get it over with already!" 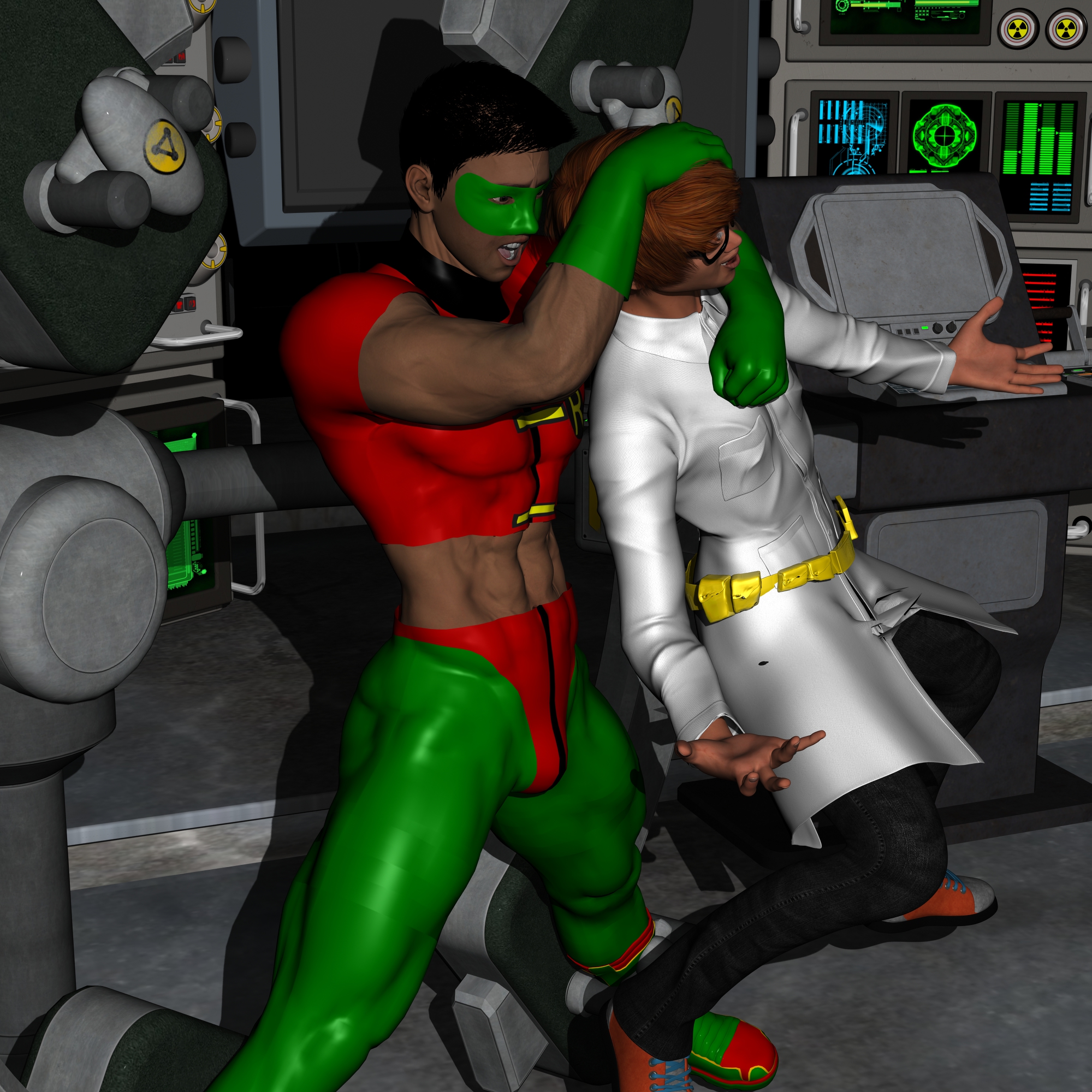 The Doc released both of the locking devices holding Robin wrists in place. As the snapped open, the Doc trusted the hero to keep his word. Robin rubbed his wrists, making small talk with the Doc about nothing, in hopes of distracting him before he took his shirt off. It seemed to work as the Doctor returned the conversation.

That was all the opening Robin needed. When the Doc was not paying attention he grabbed the Doc by the head and shoulders, spinning him around, holding him by the neck. As the Doc flailed around trying to get lose from the grasp of his captive, Robin knew he now had the advantage.

"Now Doc, how do I release the locks holding my legs?"

The Doc could barely get out the words, "The pocket of my jacket."

As Robin, fished around for the control in the pocket, "Now, once I am free we are going for a little ride. We both knew that you were never going to get away with this, face it I am just two strong and smart for someone like you."

With the remote in his hand, Robin releases the Doctor all but throwing him to the floor, where he knelt looking up at the hero who was about to push the button.

Robin had a huge smile on his face, almost one of cockiness or arrogance. He knew he was in charge now. "You know Doc; you never should have had this with you when you were that close to me, pretty stupid of you, for someone who thinks he is oh so smart. It doesn’t look that way now. But hey I can't blame you, many a villain have tried to take me out and failed, your just another to add to the list." Robin rambled on as he pushed the button.

He didn’t get what he bargained for... 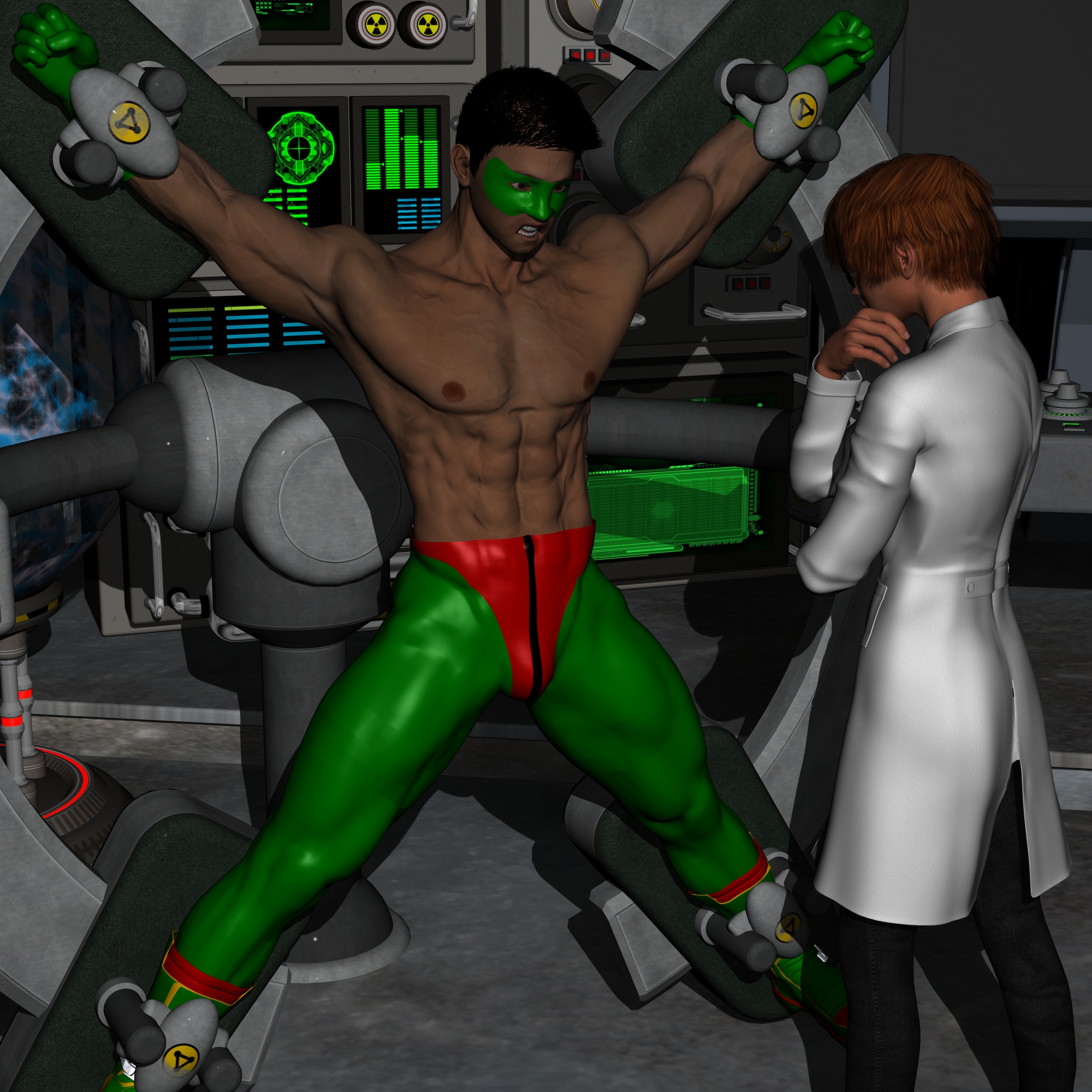 Robin was left almost unconscious by whatever that was that enveloped him when he hit the button that he thought would earn him his freedom. Instead it allowed the nerdy Doctor to regain his control over the hero. Once he shut down the energy the Doc quickly removed Robin's shirt and guided his arms back into the pads, locking them in place.

Robin was now more awake, "nice little speech Robin, but it doesn’t appear you are as smart as you think you are. Do you honestly think I would be stupid enough to give you the button that would release you? I hope you take this as an important lesson, next time I will not be as kind. Understand?"

All Robin could do is nod yes as he continued to regain from whatever that was.

"Now back to business, I trust we won’t have anything else like that happening again!"

Robin shirtless had to be one of the most perfect and sculpted bodies on earth. The Doc let out an audible gasp when he began to touch the bare skin of the half-naked hero. It caused the helpless weakened hero, to blush; he took it as a compliment, even though he knew he should not. He was proud of his body and worked hard at it. He liked to be admired.

It had another unwanted effect on the hero, one he neither expected nor wanted. He could feel the member in his suit below begin to fill with blood and stiffen. He didn’t know why this was happening to him. All he wanted it to do was stop and stop now. As he screamed at the little nerd to stop, all he could do is wonder why the hell was this having this kind of effect on him?