Alex traversed the Dark Jungle heading towards the coordinates he was given. The Merc had been hired to collect a valuable cargo that had been lost while flying over the uncharted jungle planet. The big muscled experienced fighter wouldn’t have considered doing such a menial job but the price of 20 million credits for a in essence, a simple search and find job was too good not to do.

Alex was soon near the location as he arrived at an edge to a valley, all he could see was mostly in the valley was green. He pulled out his binoculars to scout the valley. Luck was with him as he came across an area of disturbed clearing which looked like something had fallen into. He started making his way down to the area.

As he traversed the jungle to the clearing via going down hill he felt an uneasy feeling. Like he was being watched. The muscled merc pulled out his plasma assault rifle in readiness for trouble. His big biceps flexed as he aimed the rifle around. Nothing happened but it didn’t make Alex less calm about the situation.

However in his alert state he didn't look where he was stepping and he slipped on a muddy area of the hill.

"Shit!" he shouted as he slid down, he soon came to a messy thud as he ended up in a pool of mud on his ass.

"Ah fuck!" he cursed as he got up. He was now covered in mud and maybe something worse due to the pungent smell coming off him.

Frustrated at this simple mistake he carried on cursing as he walked to the location, however in another stroke of luck he heard running water nearby. He decided to deviate from his mission to find this water to wash himself and his clothes.

He soon came to a scenic waterfall and pool. Alex, wanting to rid himself of his stench and muk on him, put his plasma gun down and walked into the pool, all the while hastily removing his clothes to reveal his body.

Years of training and fighting had made him a very experienced warrior with an incredible body. His tattooed arms were massive and his enormous pecs filled out his chest. His pecs were capped with his large predominant nipples, that were beginning to stiffen due to the cool air.

He undid his pants and pulled them down with his underwear bending over to reveal his large firm buttocks. His dick flopped out and even unerect was an eyeful.

He went under the waterfall, the cool water cascaded down his hairless muscled body and he began to wash himself, he ran his hands over his chiselled abs and large defined chest to remove any trace of mud.

He closed his eyes as he lifted his face into the falling water and began to relax and enjoy his wash, however if he had been more alert he might have noticed the bushes near the pool rustling as if something was watching him.

After washing his body and clothes, He got dressed and slowly made his way on.

Alex finally got to the clearing. He saw what had caused it, it was a cargo hold. It was damaged and broken. He went to investigate. He peered into the cargo hold from the broken side with his rifle torch. He could make out various science equipment but one item seemed more important than the others: it was a stasis pod. Further inspection revealed whatever was in it had vacated.

And then he heard something from behind him. He quickly turned and aimed his rifle. Slowly out of the jungle came a creature. The Merc had never seen before

It had a green skin with a head with no features except a for mouth with a long tongue it had 6 arms. “Stay back” Alex shouted at the creature but it moved closer. 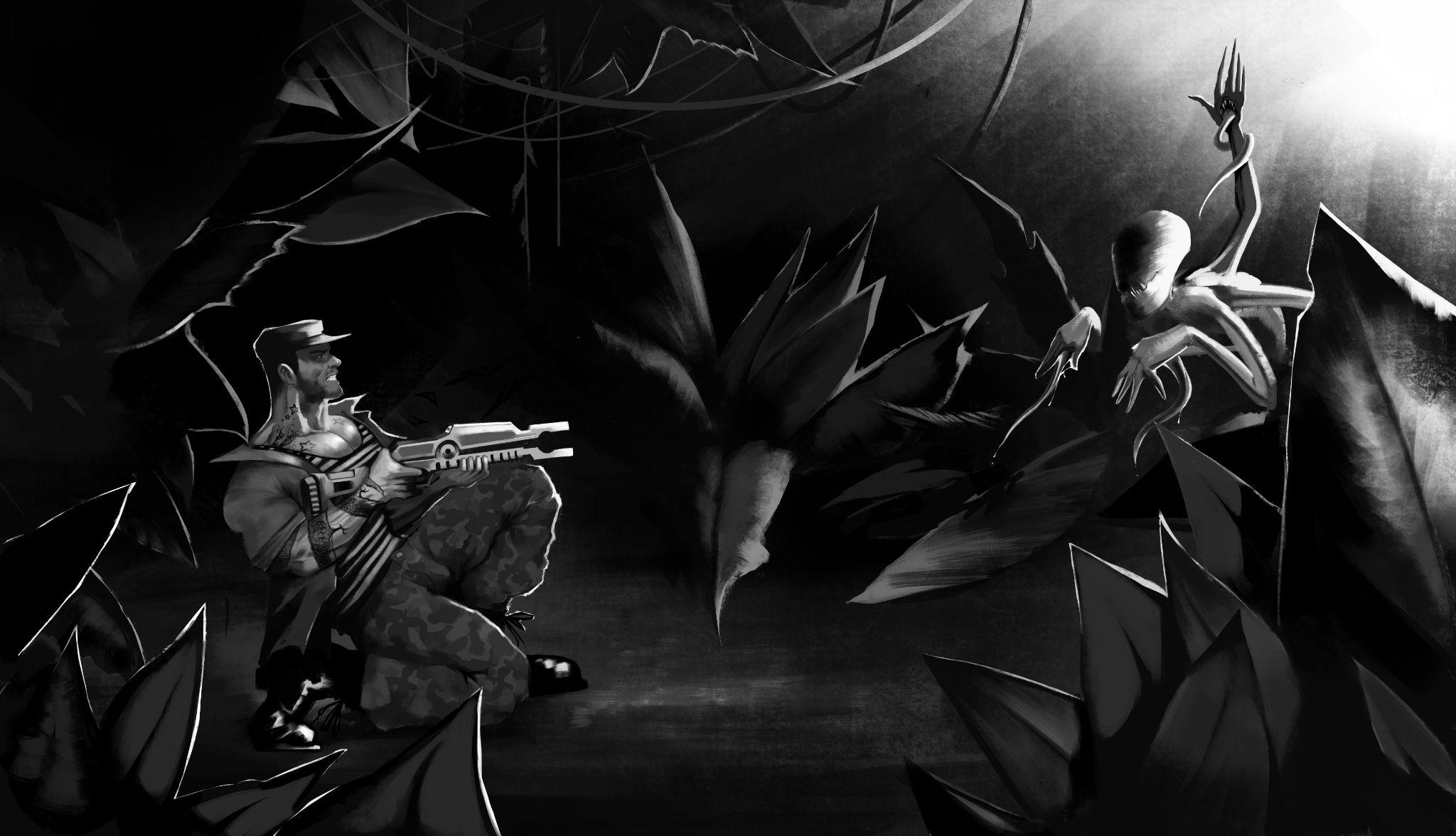 "Fuck this!" The Merc Shouted and fired at the monster. It screeched and quickly dodged the fire blast. The creature responded by stretching out two of it arms, suddenly two long tongues shot out and grabbed Alex's rifle and yanked it out of his grasp. 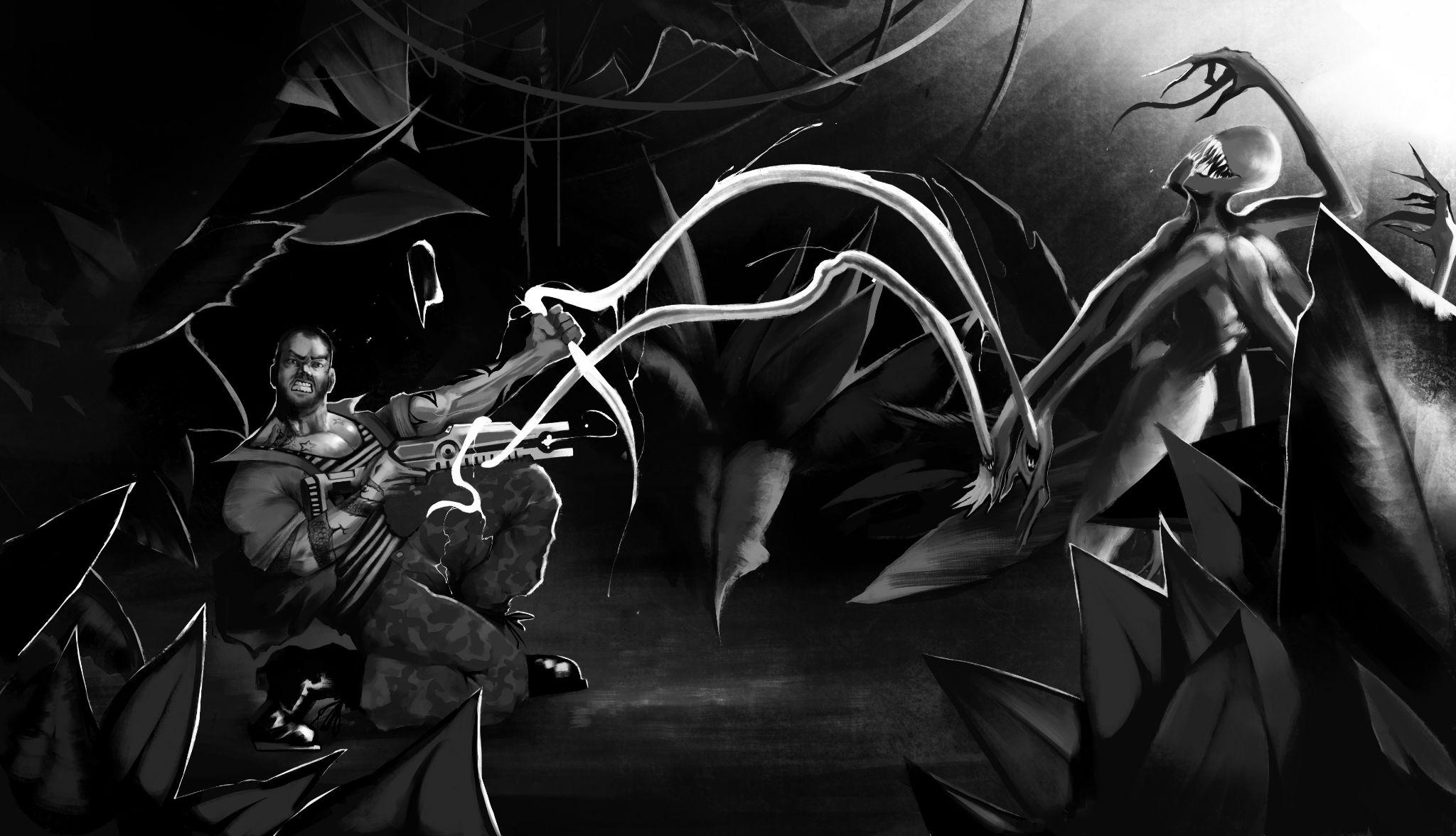 It was then the Merc noticed on the monster's hands it also had mouths which was where the long tongues had come out of. Now disarmed, the monster lunged at Alex. He dodged and pulled out a combat knife. He made a swing for the creature, cutting it slightly.

This made the creature howl in pain. Seeing his chance Alex made a run for the Jungle, however he felt a tug at his boots and he fell to the ground. The Monster had shot out one of its hand tongues to trip the merc. The Monster lunged again and this time made contact with Alex.

"Get the fuck off me!" he shouted. He struggled with the monster on top of him. He tried to attack again with the knife but the creature was ready and swiped the knife away. Alex was a strong man but he couldn't get this monster off him. He was soon restrained from behind with hands holding onto his arms and was pulled up onto his knees. 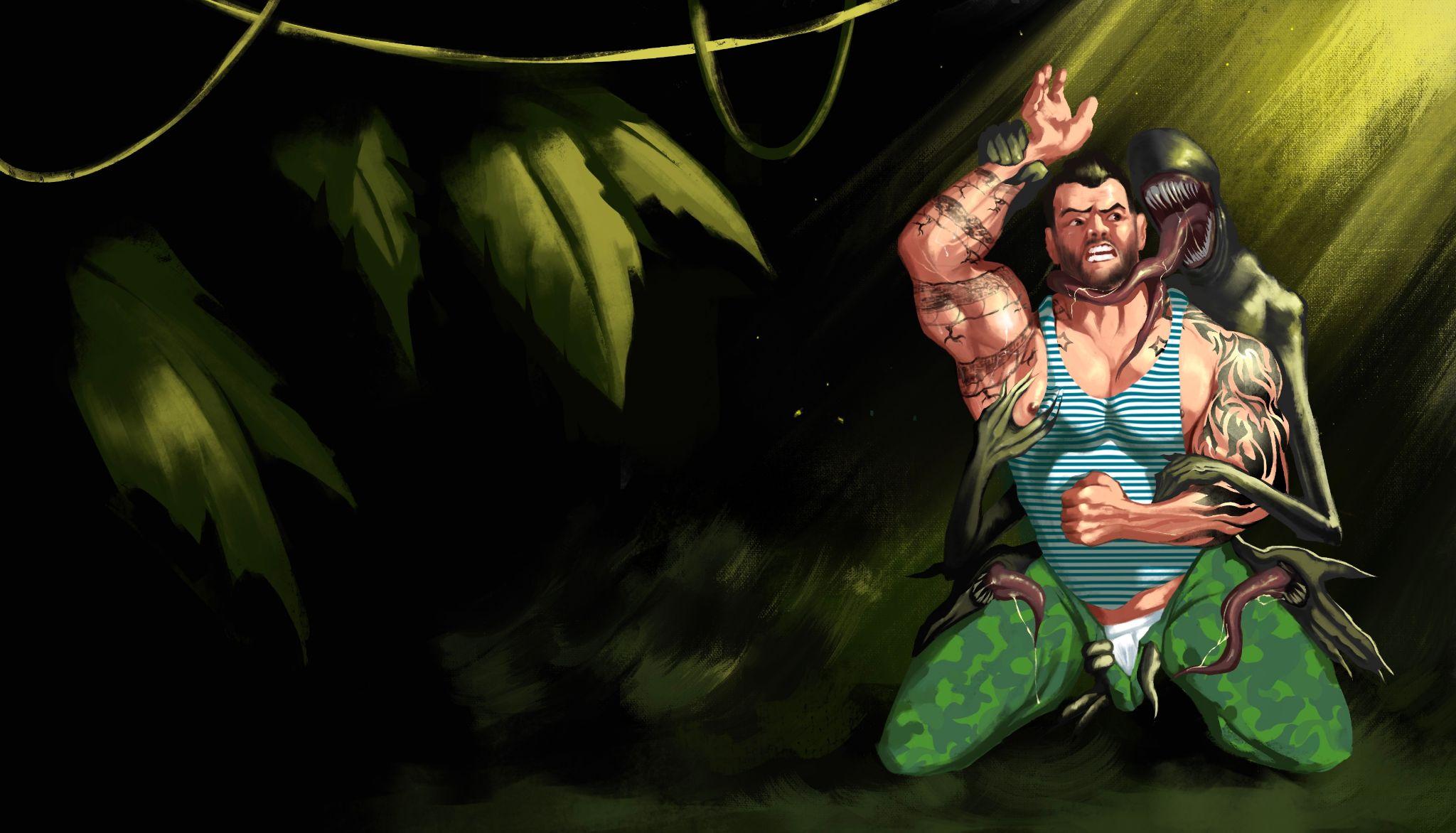 Alex tried to break free but he was at the mercy of this creature. The creature's head was to the left of him. Two of the hands then grabbed hold of his skin tight vest top and ripped it apart revealing his massive hard chest. It then proceeded to rip apart his other clothes leaving him naked

He then noticed the free hands of the creature were feeling his muscles, if he didn’t know better he would have thought the creature was admiring this muscular physique. The creature was particularly interested in Alex's massive chest and his predominant nipples.

He watched as two of the free hands slowly made their way towards his nipples, the mouths opened and the tongues went towards his nipples they flicked and played with the nubs making them pointed. The muscle merc gasped at this, his nipples were quite sensitive and were a turn on point for him. The monster soon got heavy handed with Alex pecs licking them and making his big chest wet and sore as it feasted on his man breasts. He moaned as his chest was attacked by the monster tongues and sure enough this penis was erect by the nipple play he was getting. 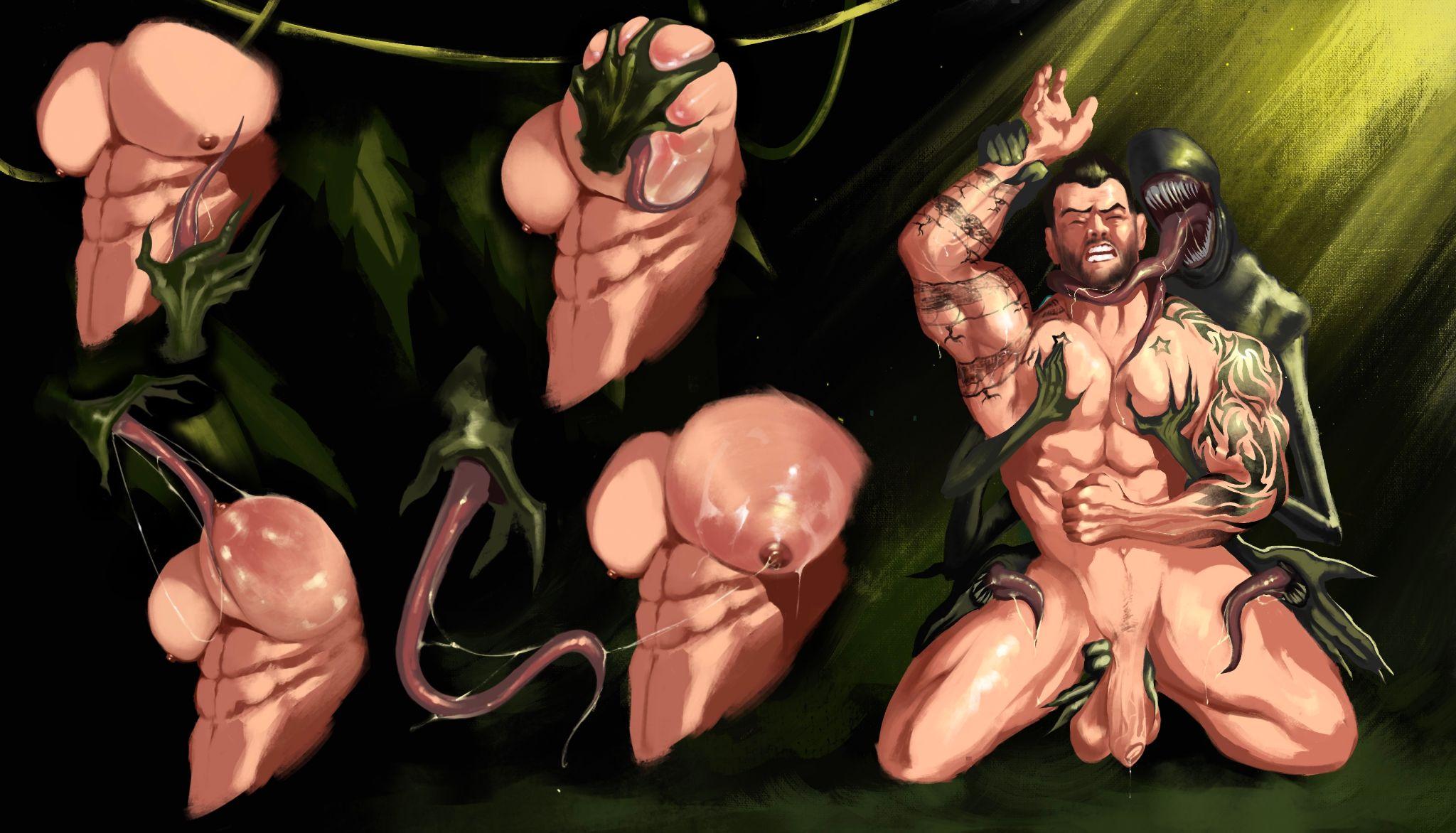 The monster noticed Alex erection and another of the free hands went towards his now hard penis, its tongue from that hand wrapped around his dick and began to jack him off as well as lick his rod. As this was happening the hands near his muscled chest grabbed hold of each pec, the mouths began sucking on his teats. Alex moaned, and groaned, he didn't want to admit it but he was enjoying his molestation by the monster.

As the monsters feasted on his chest, Alex noticed something hard rubbing against his firm muscular buttocks.

"No please!" The manly merc begged as he knew the creature had produced its huge penis and was planning to ram it into his ass. His words fell on deaf ears and the monster shoved its erection into him, Alex howled at the intrusion. Alex moaned and moaned as he was fucked, the sounds echoed throughout the jungle, the creature fucked him so hard that Alex big pecs bounced every time the monster pushed into him. His own cock was rock hard by the stimulation of his ass getting fucked. Soon the monster growled and shot his load into the muscle man, Alex too shot his load. It was too much for the muscle merc and passed out. 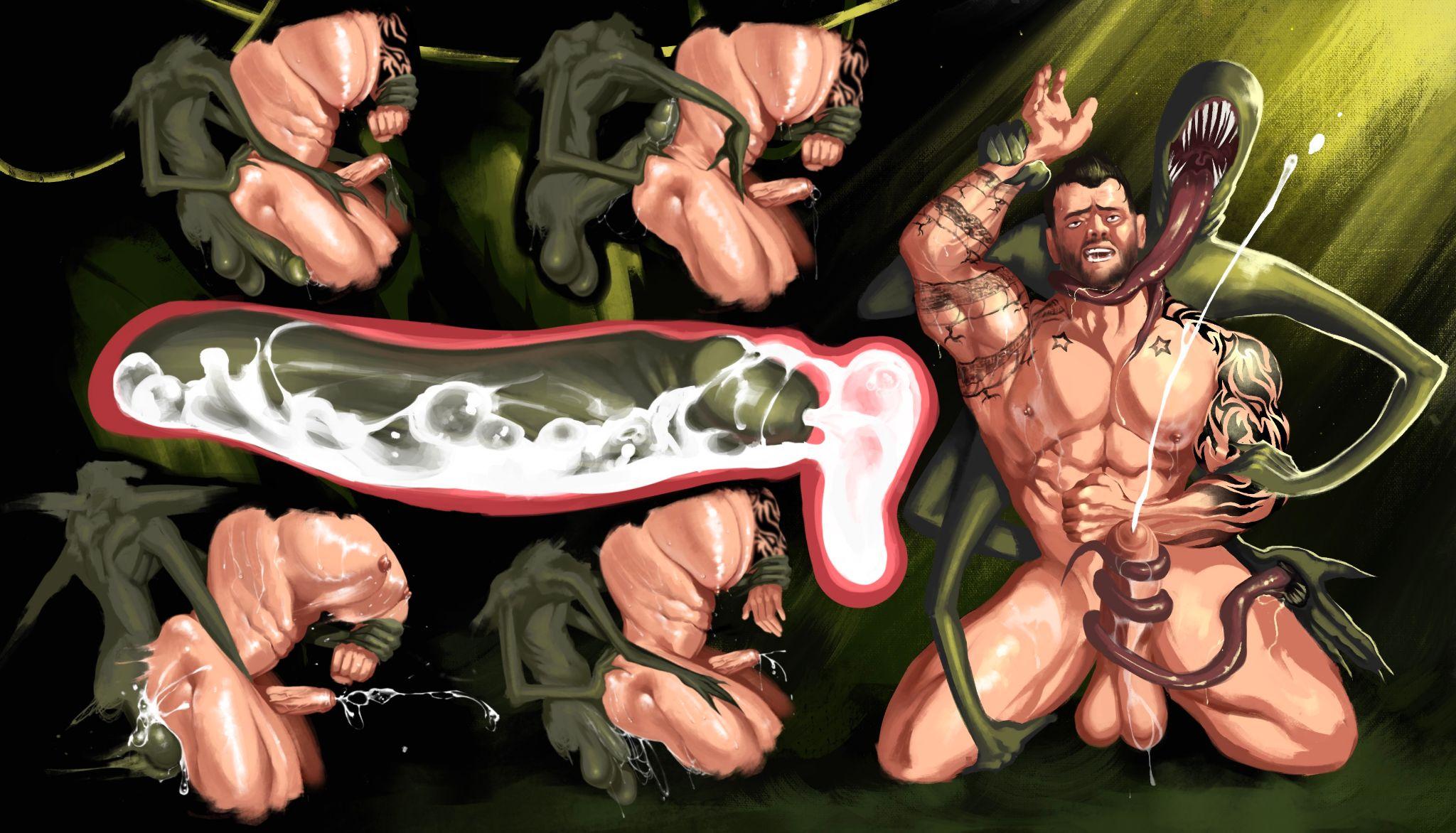 The creature picked up the unconscious muscle man in his arms, its main tongue salivated as Alex's massive chest stood out as he held him. It carried its new mate away deep into the jungle.. 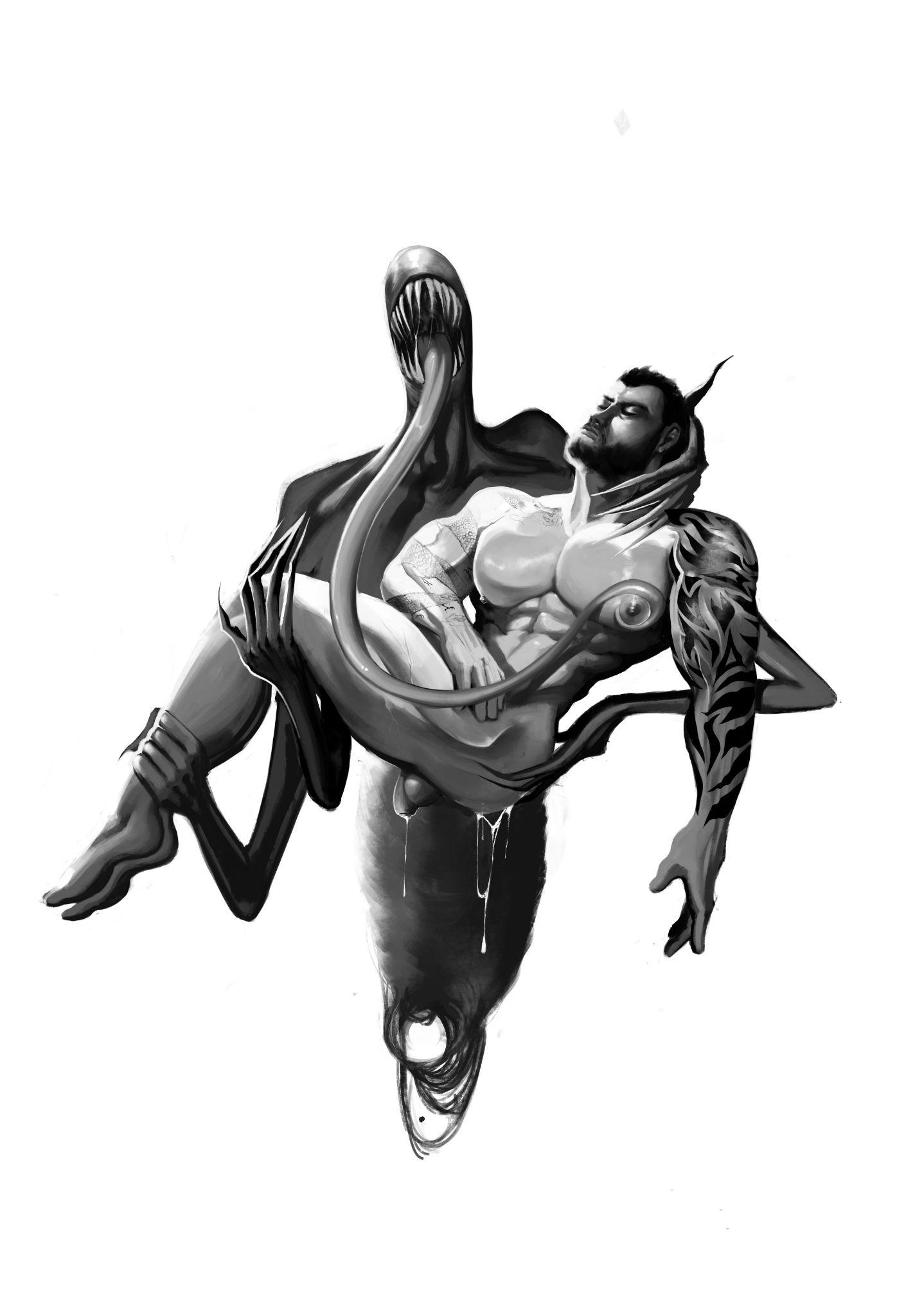