But the nightmare all is too realistic.

When he awakes he is restrained in a holder. His freedom of movement is limited. Even his neck is hold in place with a ring. He sees Nathan and other guys beside him being hold in the same manner. Although the situation is strange he cannot take help but to examine all the dicks and scrota presented nicely between the spread legs.

The other guys are also just waking up. Nathan seems want to shout something but is cut off of his sound instantly. In his panic Matt also tries to shout but at once the neck ring tightens and cut off his sound.

Then their host, who had greeted them at the anteroom, enters the room, followed by two naked boys also with a ring on their neck.

“Welcome again guys,” the host said cheerfully and waves with the empty wine glass in his right hand. “As I have promised you all with a cumming experience you cannot even imagine you will get what you are promised soon. Don't worry, everyone will get his share. Meanwhile just enjoy the show. As good manner demands, while you are waiting and being entertained, you should be quiet. As you have already noticed I have take care of that. Only the one on stage is allowed to sing. My boys will now prepare you for the show and I am sure you will all enjoy this unforgettable experience.”

After the Asian slave boy has finished with Nathan he comes to Matt. It is extremely humiliating for Matt to be handled this way. The slave boy even pushed back the uncut foreskin of Matt to rub the oily substance on his glans. Also the intrusion of his fingers in Matt's hole makes him feel extremely humiliated. Especially because all he is doing all this loveless, just as if he is tending a machine. Speaking of machine. Matt hears a click and a scarcely audible hum below himself. In the next moment the rubber is already poking on his hind door. Matt tries to adjust and open his rectum wide. But still he can feel every nob on the dildo and has to notice every inch of that fat thing remorselessly breaching into him.

When all guys are prepared Matt noticed a new thing. The oily substance must contain something, because despite his desperate situation and despite the pain in his ass, the knocking of the fuck machine on his g point and the substance is making his dick filling with blood. Not only him, all guys are now showing an erection between their spread legs, exposing their balls.

On a command of the host the slave boys takes down the first guy in the row from his holder. And drags him to the frame in the middle of the room which Matt also just notices. The guy struggles but he is alone against two, and the host is whipping him without mercy so his struggle is in vain. The slave boys attach chains on the rings on his wrists and feet and draw him in the air. Another chain is attached on the ring on his neck, pulled back and bound to the base of his balls. This way the poor guy is forced to look at himself in the mirror before and behind him. He is forced to see what ever is going to do with himself. Two heavy metal balls, one golden and one silver, are pierced into his tits. The guy cries out in pain. The slave boys put a large vase below the dick of the guy. One of them kneels beside him and begin to milk his dick. The other stands behind him and begin to massage his prostate. Soon the poor guy begin to mourn and to twitch, makes the two metal balls swing. The host bends over and holds the empty wine glass below the dick just in time to get the glass filled with the first shoot of the day, while the guy bursts in to a loud cry.

The host tastes from the glass and says with satisfaction: “It is a good harvest. Take as many as possible out of them. You have to get the vase full. Otherwise I will put you two on the frame too.”

Matt has lost his sense for time. His ass is on fire. But his dick is throbbing. He is over ripe for milking, he knows. He has lost count how many time every guy before him had shoot. The first three or four times with some kind of joy, but after that it seemed more and more like pain. At the end they were scarcely conscious, it seems that only their genitals are reacting involuntarily on the stimulus administered on them to force them go on and on. When they are finally take from the frame only the shallow raise and sink of their stomach shows that they are alive.

Matt watches all this in horror, and yet he cannot take his eyes away from it. He sees every shoot of the guys. He is now looking at how Nathan is spitting his jizz the second time. Nathan like a falling angel hanging on the frame, the two metal balls the only decoration of his marvelous body. His over large dick throbbing and spitting his semen into the vase in large wards. Still the slave boy kneeling beside him is milking him as if he is a cow. They will not give him chance to recover, they will drive him until he has squeezed off the last drop of his boy juice.

Matt looks at him and knows that he will be the next. He hopes this is all a nightmare or some super hero will come to rescue him. He is afraid of being humiliated like milked as a cow, to shed his own boy juice for what ever obscure purpose he cannot imagine, not to speak of the pain that awaits him during this ordeal.

But his own dick is curving up, albeit the pain and the horror, is yelling at him that he is ready. His balls are over filled and calls for release.

He cannot take his eyes away from Nathan. His own semen is going to be mingled with Nathan's in that vase. He knows he wants it, if nothing else. It is unavoidable. 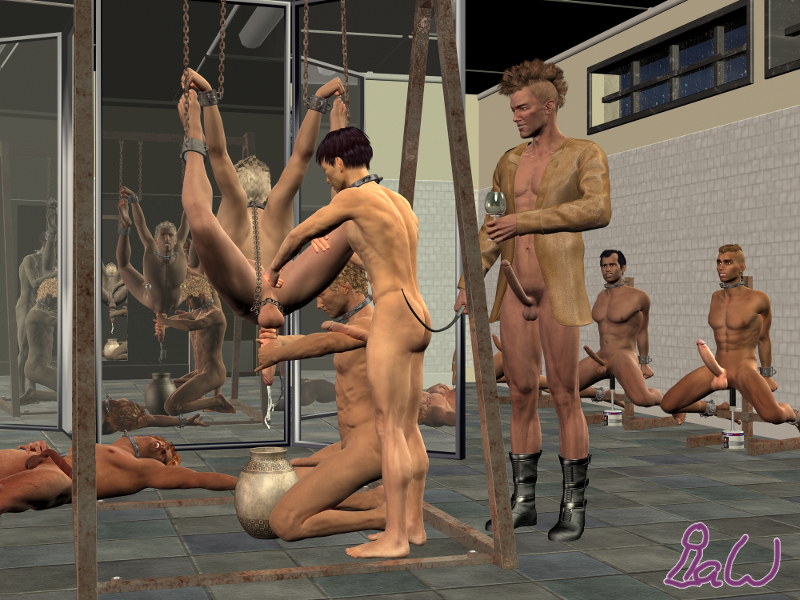