I’m always looking for critique and feedback, so please don’t hesitate to reach out if you have constructive criticism, ideas for stories you would like to see made reality, or unfettered praise.

Cody woke up, slowly opening his eyes to take in his surroundings. All around him were tree branches, twisted and gnarled. His strong, thick arms were held tight above him, the full weight of his muscular body resting on them. His legs dangled freely, two or three feet he guessed, above the dark waters of the swamp. He craned his neck back to see what was restraining his arms and froze. Two thick, black tentacles were wrapped around his arms, wound tightly from his biceps to his wrists. A thick slime dropped from them, landing in his short hair, running down his face, oozing into his armpits, and sliding down his ripped torso.

Cody kicked his hairy legs thunderously, twisting and contorting his body, hoping to escape the tentacles’ grasp. He stopped abruptly as a third tentacle swiftly raced out of the water and wrapped itself around his naked waist, the same slime dripping down his hairy abs and pooling at the band of his gym shorts. The tentacles reeked of swamp, and the thick slime was hot on his flesh. Cody choked and coughed, his whole body wracked by the effort. More tentacles rose from the water to restrain his legs, coiling around his naked calves, their tips caressing his inner thighs.

The sensation, while revolting, caused a stirring in his groin. His meaty dick, musky from the day’s hike began to swell, hardening against his will. The hotness of the slime covering his body spurred his arousal, and within moments the mesh of his shorts was stretched taught over his nine thick inches of hard cock.

Cody’s primal yell, desperate and angry, echoed through the swamp. A different kind of tentacle emerged from the waters below, five thick finger like projections curled at its tip. The tentacle rose to Cody’s face, the five appendages stretched out and wrapped themselves around his face, covering his mouth. Cody’s muffled scream brought the attention of another tentacle, which wrapped itself around his muscular pecs and coiled loosely around his neck. Cody struggled again, thrashing his arms, kicking his legs, twisting in the firm grasp of the tentacles.

An eyeless head atop a spindly, wrinkled tentacle rose from the swamp, alien and hideous. The head was about as wide a Cody’s frame, punctuated by two wrinkled drooping lips. The head considered Cody in his entirety a moment before spreading wide its wrinkled lips, revealing a deep, muscular throat. Cody could see a movement in the tentacle below the head, like something being thrown up.

Two tentacles emerged from the open mouth, one dark purple and sharp, the other translucent and hollow. The purple tentacle wandered into the leg of Cody’s gym shorts and moved up towards his waist, brushing against his heavy balls. The sharp tip of the tentacle emerge briefly from the shorts before cutting the fabric away, letting it flutter down to the surface of the water. The tattered shorts were quickly pulled under the water by other tentacles.

The head, wrinkled lips still agape, moved under Cody, the tentacles holding his arms lowering him into the waiting mouth. The lips wrapped around his feet, the throat swallowing continuously, pulling his body down into the beast. Cody’s muscular legs disappeared into the throat up to his knees, then his upper thighs, then his heavy balls. His thick, soft dick rested on the lips then was pushed up against Cody’s stomach as he was further swallowed down. The lips pursed and pulled, up Cody’s abs, up his pecs, past his hairy, musky armpits. Cody kicked and worked his body against the inside of the throat, digging his toes into the sides searching for leverage to stop from being swallowed.

It wasn’t until he had been swallowed up to his chin that one of his feet found purchase within the throat, halting his downward plight. Cody pushed off with his foot, but a sickening snap sent him sliding fully into the throat, now completely enveloped. Hands now free, Cody pulled them down to his sides and tried to push outward against the throat to slow his progress. His arms strained, pulling himself up against the swallowing, every muscle taut and shaking. The throat closed tight against his body, but still he halted being eaten. 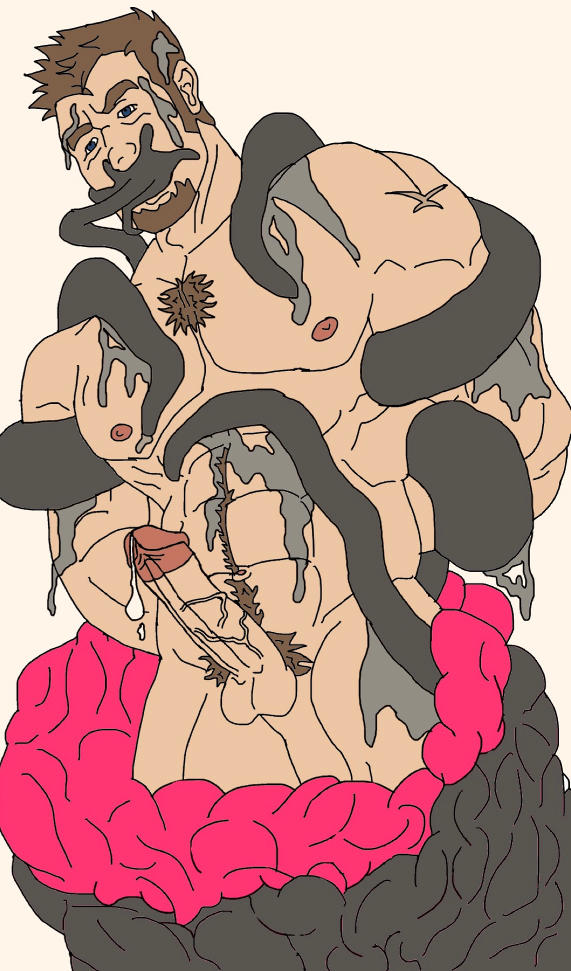