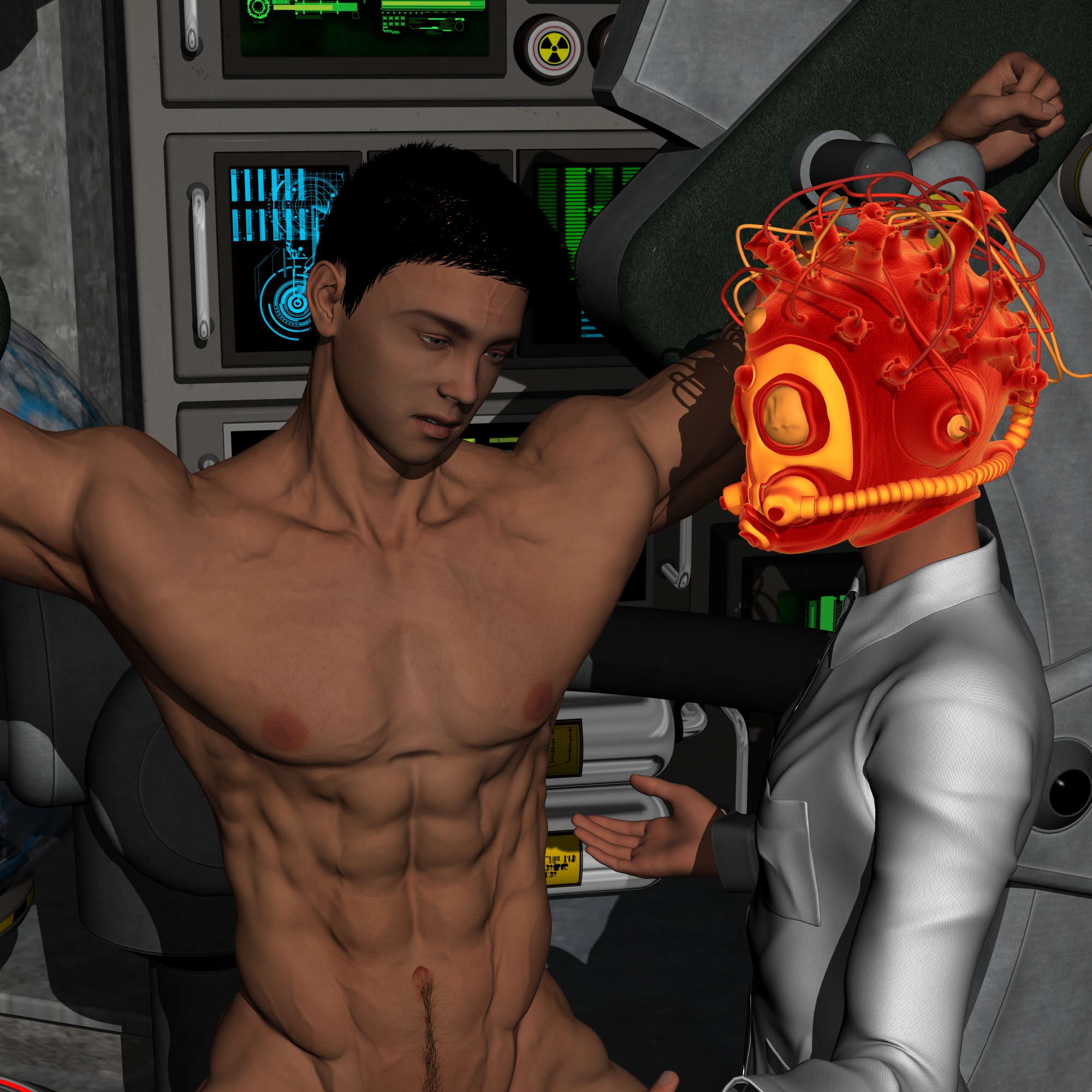 The pain was excruciating for Robin, it felt as if is mind was being pulled apart a probed. There was no part that was not touched. He remained conscious through the whole procedure, writhing in both physical and mental pain. He had never experienced anything like it. After a couple hours it was done.

The Doctor removed the hood from Robin's head. "How do you feel?"

Robin took a few deep breaths and time to recover. "Ok, I think I am ok? That was brutal."

"You might be surprised but I am glad you are good, it's is not my aim in all this to destroy you, I hope you know that."

"Then why are you doing this to me?" The hero asked still recovering.

"You will understand in time."

The Doctor slipped the hood on his own head, while Robin looked on. "Well it worked great; it captured ninety nine point seven percent of your brain content. You can't get better than that."

He slipped the helmet off. "By the way, I told you that you would enjoy getting fucked, pretty amazing feeling isn't it?"

"Why do you say that? Wait you could see that in the hood?"

"What? How is that possible? Just what do you intend to do with that thing now that you have it?" 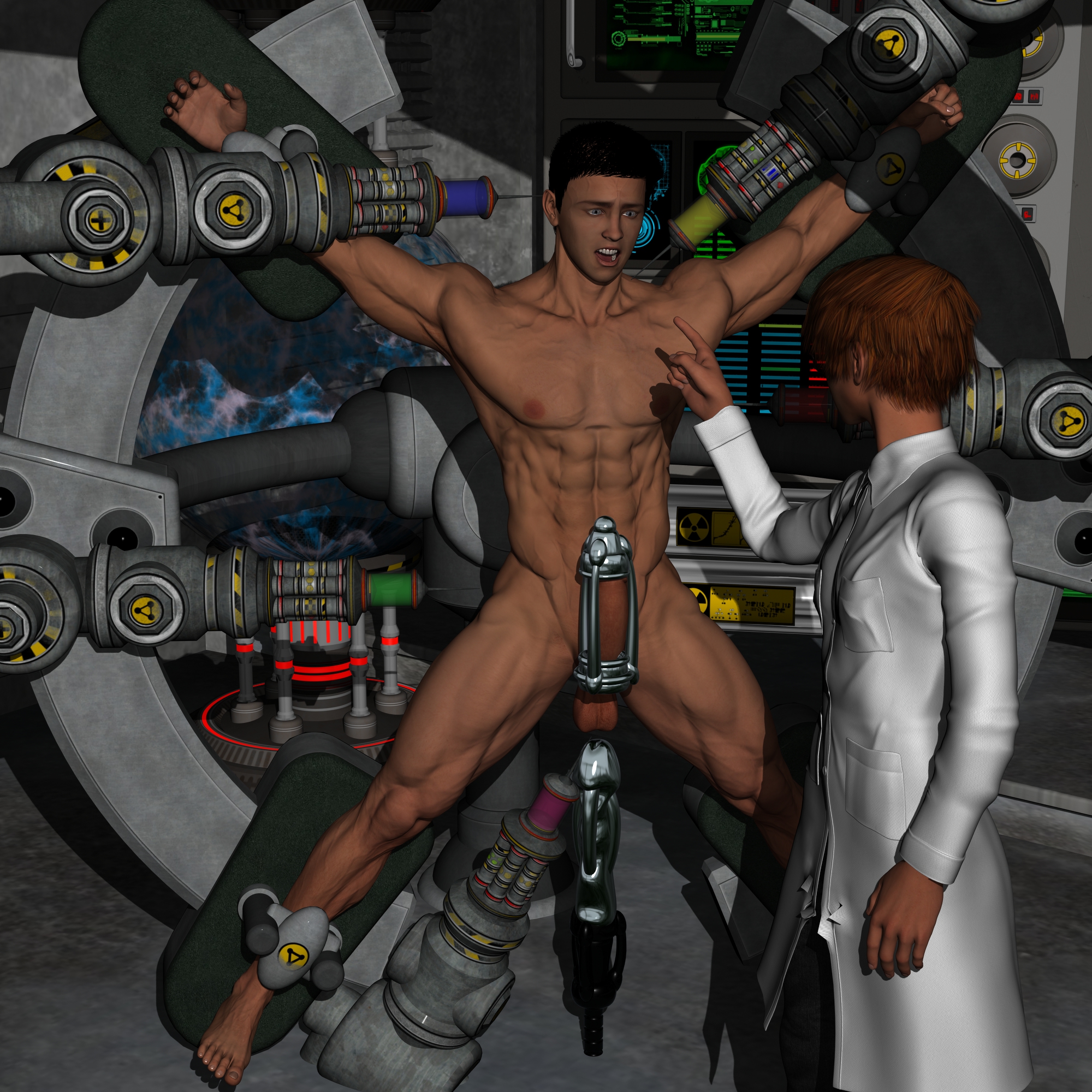 The Doctor let Robin rest for a while, he wanted him back up to full strength for what he was about to do next. It would not take him long, as he was in top physical condition. The Doctor stood at the control console pushing button after button and typing on the keyboard. Things around the table where Robin was secured began to move around and into place. They were things that did not look very nice; things Robin wanted no part of.

He started to question the Doc but he didn’t get an answer in return; he apparently was too busy preparing whatever was to come next. When he was done, the tools around Robin stopped moving the Doc stepped out from behind the control panel. Walking up to look at Robin, he said, "everything is ready; we will start soon. Do you still want me to explain all of this to you before we start?"

"Well I have a feeling you will not release me, so I guess I would rather know what is going to happen to me, I have to say at the least it doesn’t look very good."

"I am truly sorry you have to go through this, but it is very necessary for me to achieve my ultimate goal. You are right; it will be the most painful thing you have ever had to go through in your life. Basically what I am doing is taking various samples from different parts of your body that I need to complete my work. As you know you are already held in place and can't move, but it would be best if you didn’t fidget."

He paused for a few seconds and then continued, "When the process starts several things will happen, first the suction cup on your penis will milk you of your precious seed and collect it. It will force you to orgasm several times in rapid succession to get a core sample. To help that along you will feel a stainless steel plug enter your ass and push against your prostate, while sending a varying rate electrical charge into it, which will help produce the rapid orgasms.

There will also be five of these razor sharp three inch needles that enter your body at various point, your right hip, you right testicle, your chest, your left neck and your right temple. These devices will inject various chemicals in precise amounts into your system and then collect some samples, which I will need. You should also know that your entire body will be engulfed in a special energy to help stimulate you as well a direct beam of energy to the chest."

Robin looked down at the professor in disbelief. How could anyone do this to someone! "What will be left of me when you are done, will I even be alive? What is your end goal in all of this?"

"I promise you will be alive and well when I am done taking samples, you may be a little sore and tired but you will be fine. As to me end game, you will know all the answers very shortly, but we need to start."

"Listen Doctor, if I have wronged you in any way I am sorry, please don’t do this to me!" He said almost begging the little nerd to stop.

"I am sorry Robin this is going to happen no matter what, it is necessary. I am going to put this bit gage in your mouth so you have something to bite down on during this, it will help. I am going to step over to the control console; the whole process will begin about a minute after I enter the go code in the computer. Try not to fight it; it will be easier on you." 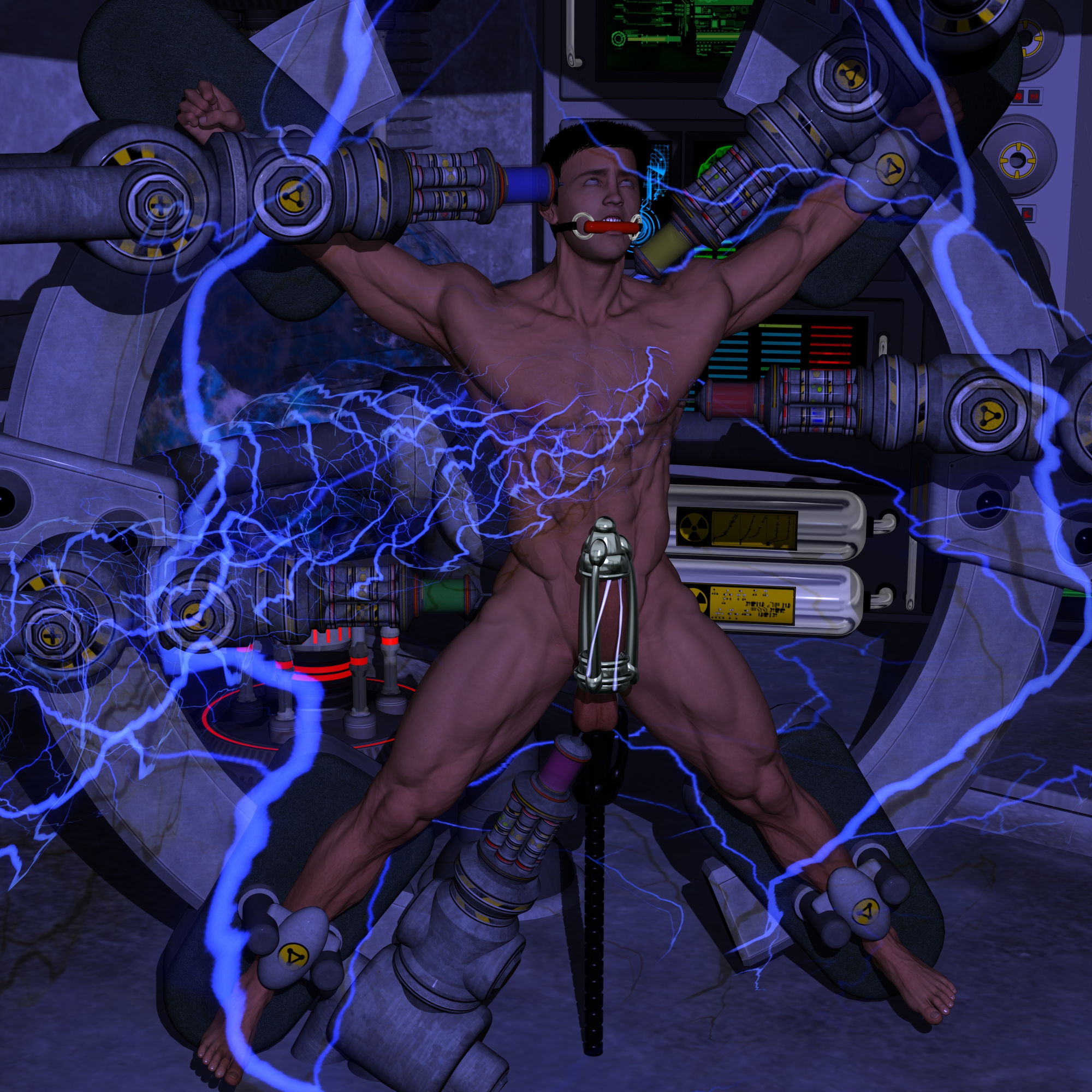 Robin was not looking forward to what was about to happen at the hands of this little geek Doctor, but it looked like it was inevitable. He decided to not show fear and take it like the hero he was. He braced for whatever was about to start.

The first thing he felt was the suction and pumping starting from the thing that was attached to his cock. Almost at the same time he felt the cold metal plug invading his ass, no matter how much he clenched and tried to stop it, it was going to win. It was huge, to say the least, he felt as if it was ripping him apart, after all the only prior penetration he had experience was from the Doc's finger and cock, and let's face it, the Doc was not overly well endowed. Once it was fully in place the electro kicked in sending waves of positive energy throughput his prostate and body.

His cock hardened beyond belief as the sucking action picked up. Moments later everything turned blue as some kind of energy enveloped his entire body. At first it felt almost good, warn and somewhat relaxing, but then as it intensified there began to be pain and almost a burning feeling. He could see some of the giant needles and syringes begin to move as they pierced the various parts of his body. The pain at this point was beyond belief, he felt as if he was going to bite the gag in two.

The needle that had pierced his temple caused the most pain for him, he tried to remain as still as he could, and this was bad enough he did not want to cause any more damage than possible. The needle that entered his right nut made him lose his breath and tense up. He instinctively wanted to pull his nuts up inside his body to protect them from damage, but whatever was being injected into them was arousing him beyond belief. His nuts were producing more seamen than they ever had before. His nuts were in overdrive now as his first orgasm began to pump his seed out through the track inside is massive cock. The collector did its job gathering almost every drop, for later use.

He didn’t even notice the other needle that had entered his body and what effects they were having. His body and mind were being wracked by orgasm after orgasm. Now he had some idea of how a dairy cow felt being milked. It was literally the most amazing feeling and the worst thing he had ever went through in his young life.

When everything was all said and done Robin had twelve orgasms. The last two were dry, as there was no seed left to be milked out. When those occurred it almost ripped his insides out.

Somewhere after the dry orgasms he lost consciousness. The computer could sense the procedure was complete; shutting down the process. All of the various automated tools retracted back and out of the way, leaving clear access to unconscious hero. The Doctor walked in to do one more procedure. He placed some sort of device in the center of Robin's chest.

When he was done he stepped back with a big grin on his face. "Soon it will all be clear, just be patient my hero, I will return and all will be clear. I will tell you everything. You will also have a decision to make.