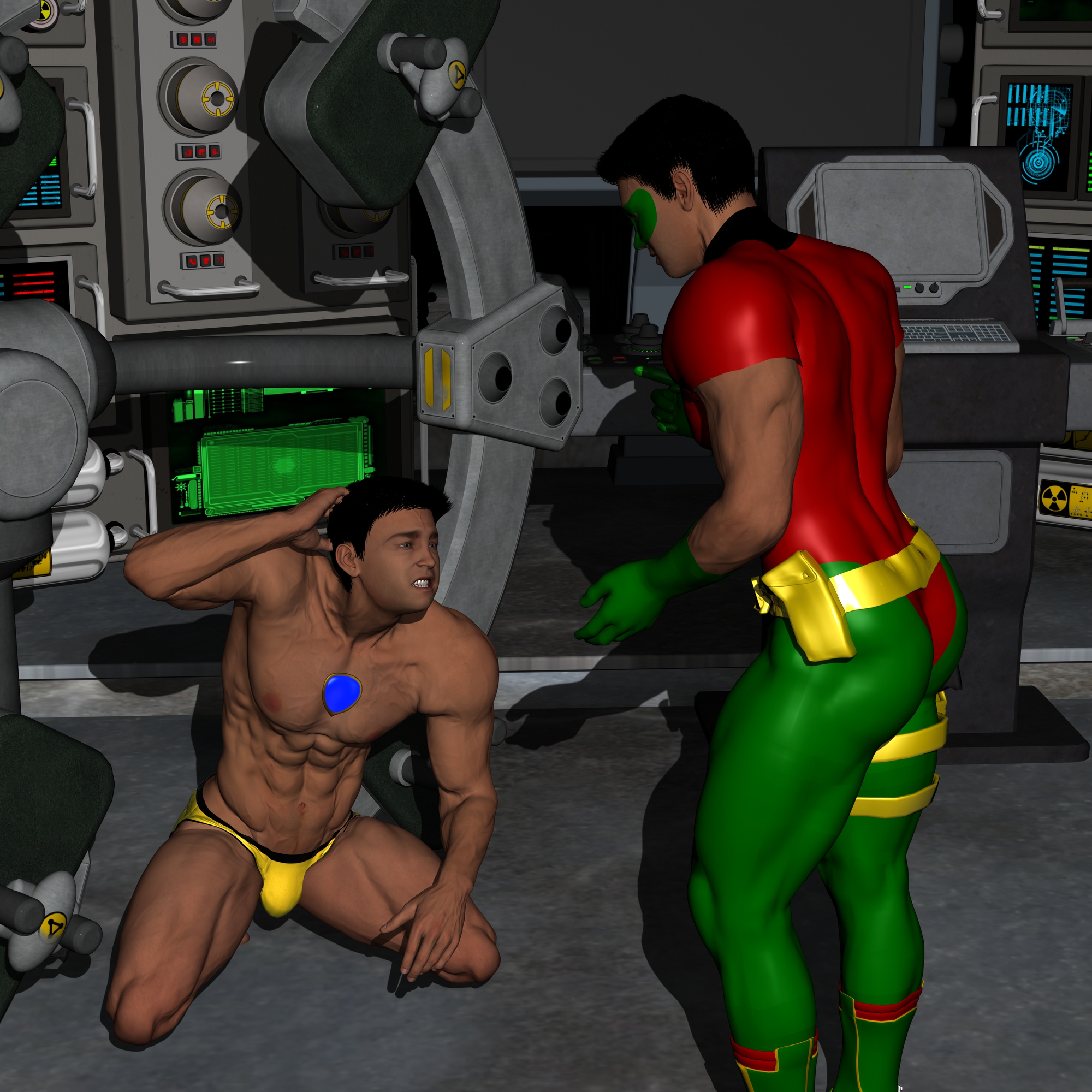 "Those are all good questions that need answers. Answers that we will come up with shortly. Before we begin to explore those, I want to show you that I trust you; I want to give you a little more freedom and try to make you a more comfortable until we can decide how to proceed.

"The only way you can make me more comfortable is to stop this sick game you are playing and let me go, turn yourself in to be locked up."

"I think we both know that is not or will never happen. You need to accept it has and will continue to happen. Now I will tell you that I have a plan in mind which I think you will like very much and maybe change your life into something you have wanted for a very long time."

"Trust me you have nothing to offer me, except release and surrender."

"We will see about that in a little while. Now I am going to let you out of the bindings and allow you to relax. Keep in mind a few things, including I am now you and have all of your strengths and abilities, also this facility is very secure and you will not make it our easily, not to mention if you try anything I have ways to control the situation. So do I have your word when I release you that you will be in your best behavior?"

"Yes, yes anything to get lose from this thing."

The New Robin stepped forward; releasing the clamps allowing the former hero to fall to his knees on the ground, where he looked up at his copy still in disbelief it was really him. The one thought that kept going through his mind as he looked at his exact duplicate dressed in his uniform, "Dam, I do have the perfect, who would not want to be me or be with me, I am the hottest, sexiest thing on earth," 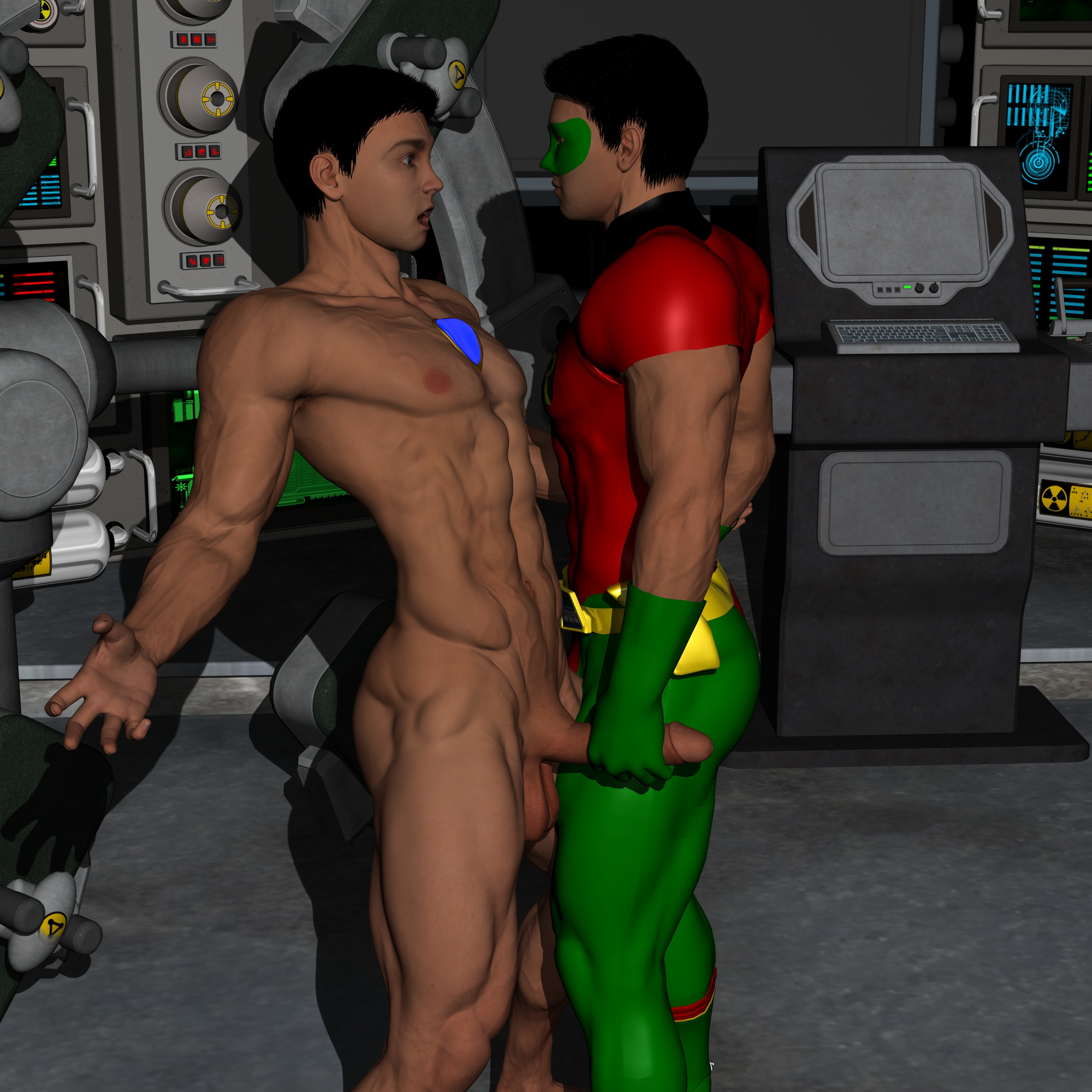 Robin finally made it to his feet, facing his copy nose to nose so to speak. The new Robin stripped off Robin's underwear he had put on him earlier, he knew he needed to get back inside Robin's head, and in this cases the best way to do that was through his cock. For Robin, at least the old Robin, everything was about sex, and his body, controlling him would be so so easy.

After he had him naked again, the original Robin began to protest, bit the Doc or the new Robin quickly dealt with that; taking Robin's cock into his hand as the two looked each other in the eye. Robin was disgusted in one way, yet turned on in another. His anger and protest soon softened and turned to feelings of pleasure as the new Robin gently and slowly stroked his captives cock, “You are enjoying that aren't you? Don't answer that, I can tell by your reaction that you are."

Robin's eyes closed as he began to almost pure as the Doc kept up the slow steady of his cock. He was now in an almost trance like state, the New Robin knew he had him in his control and could get him to agree to anything. "Now Dick, you have some decisions to make. What you want the rest of your life to be, and how you want to live. You have several choices; first of all you can stay as you are now and become my slave in every way possible. Now I would love that, but of course because we look so much alike you would have little freedom and need to stay locked away."

Robin didn’t like the sounds of this but had to ask, "What are my other options sir?"

The new Robin liked that, he knew he was winning the battle for control of Dick Grayson when he called him Sir, but he still had a ways to go. "You can be pretty much anything or anyone you want using the genetic sequencing. If you want to be a cat, I can make you my pet cat, if you want to be a famous female supermodel, we can do that, hell if you want to be Bruce Wayne, or Batman you can be him, you just name it."

"Then what happens to them?"

"Who cares, I could leave them mindless drones so they never bother you again, and it’s up to you. This is a one-time offer, so you will need to decide soon. If I were you and I am you, I would choose to become Bruce Wayne."

Robin smiled at the suggestion while his cock also jumped in the New Robin' s hand, a sure sign he liked the idea. "Why should I become Bruce?"

"Besides, we both know how much you love your own body and think it is perfection. If you became Batman and I am Robin, you could see yourself daily, admire your body, and even take me as your lover." 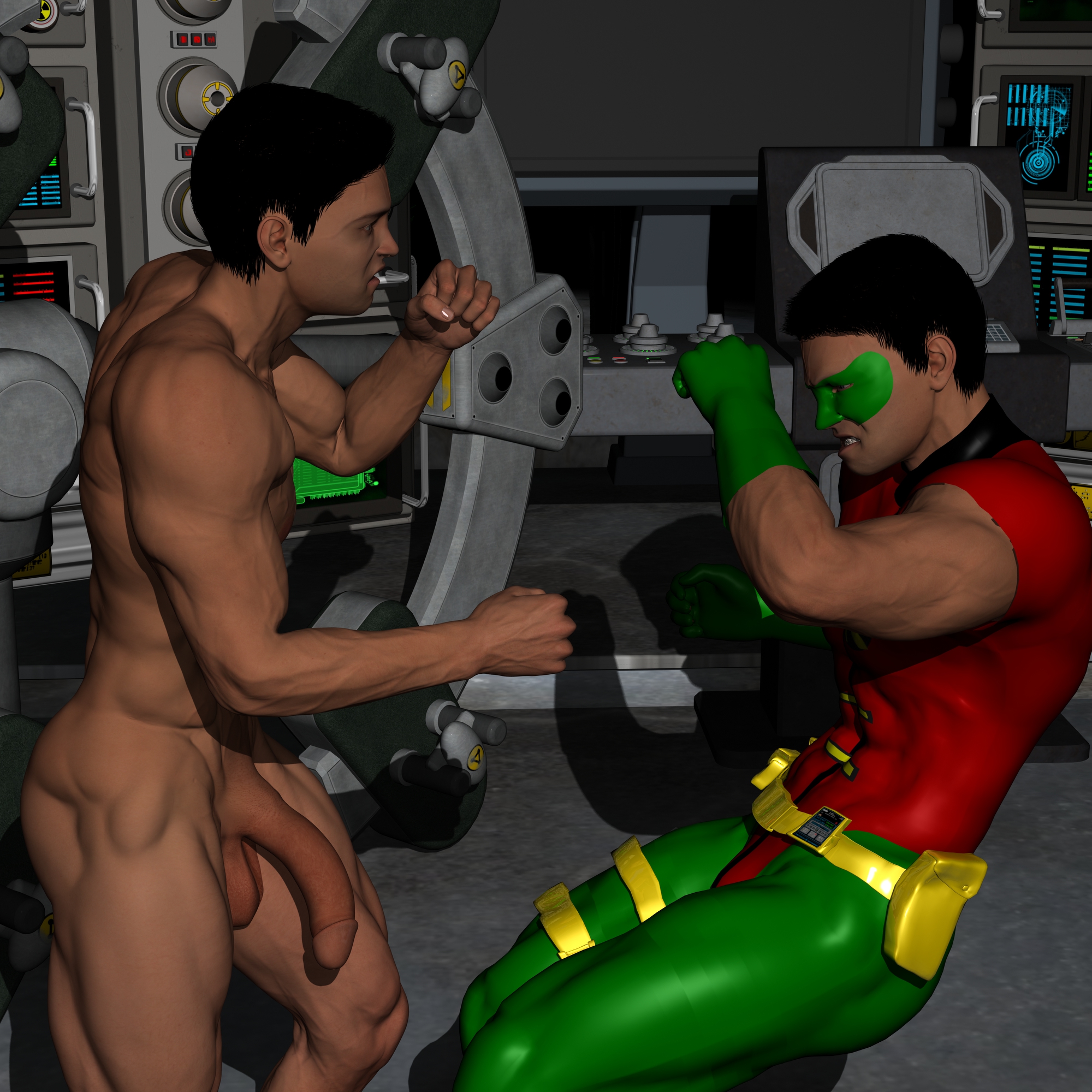 Those last words were enough for Robin; he had had enough that was all he could stand coming back to reality. "You are an evil sick son of a bitch, I will never serve you and I would never do that to anyone. Go to hell you bastard, I am going to expose you to the whole world!" He screamed as he delivered a blow to the New Robin's torso sending him flying back, landing on his ass. 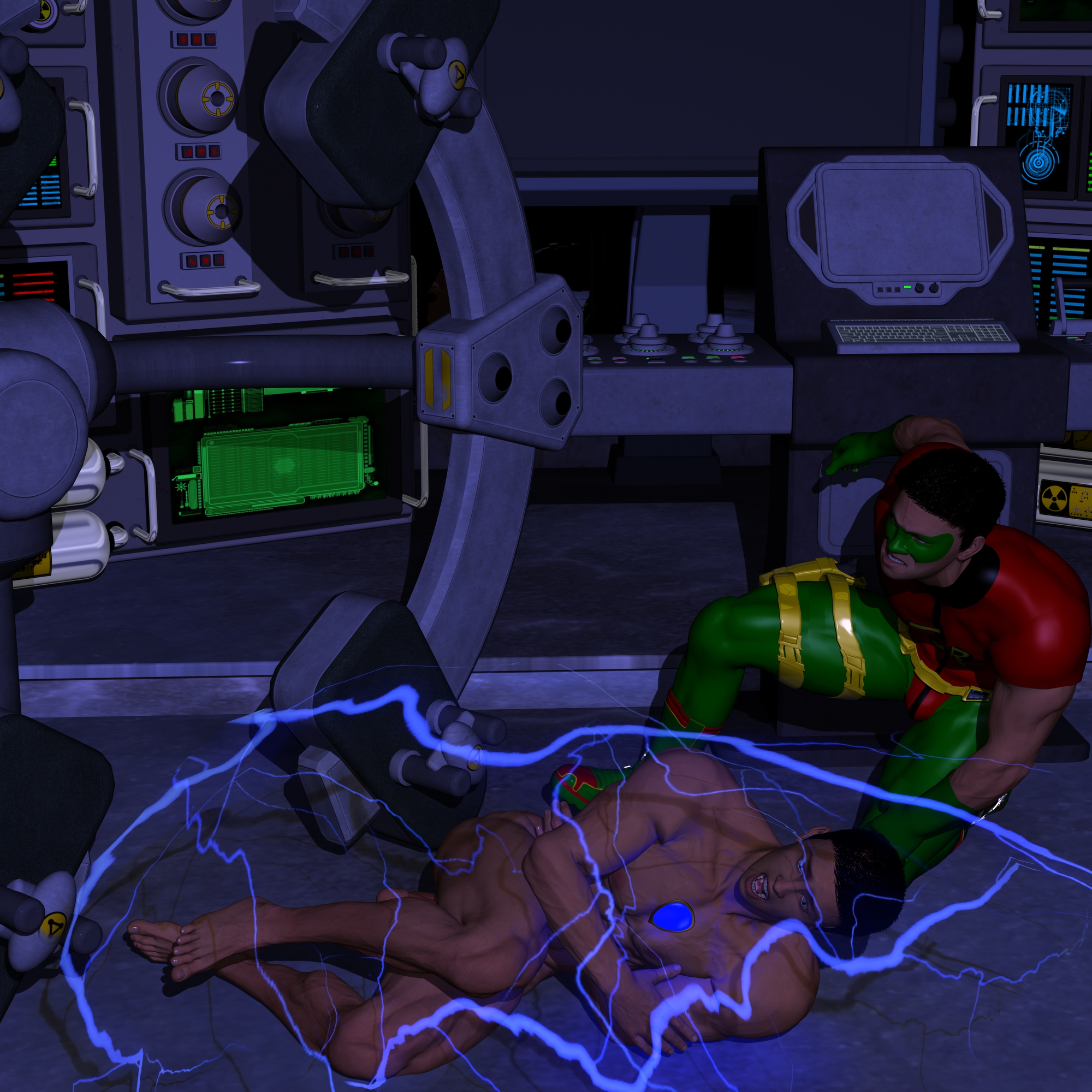 The blow Robin delivered was not enough to faze the villain. The new Robin instantly hit a button on his utility belt, sending Robin to the floor in agony. He was enveloped by a blue energy field again obviously causing him great pain. The new Robin collected himself watching as his captive continued to suffer. 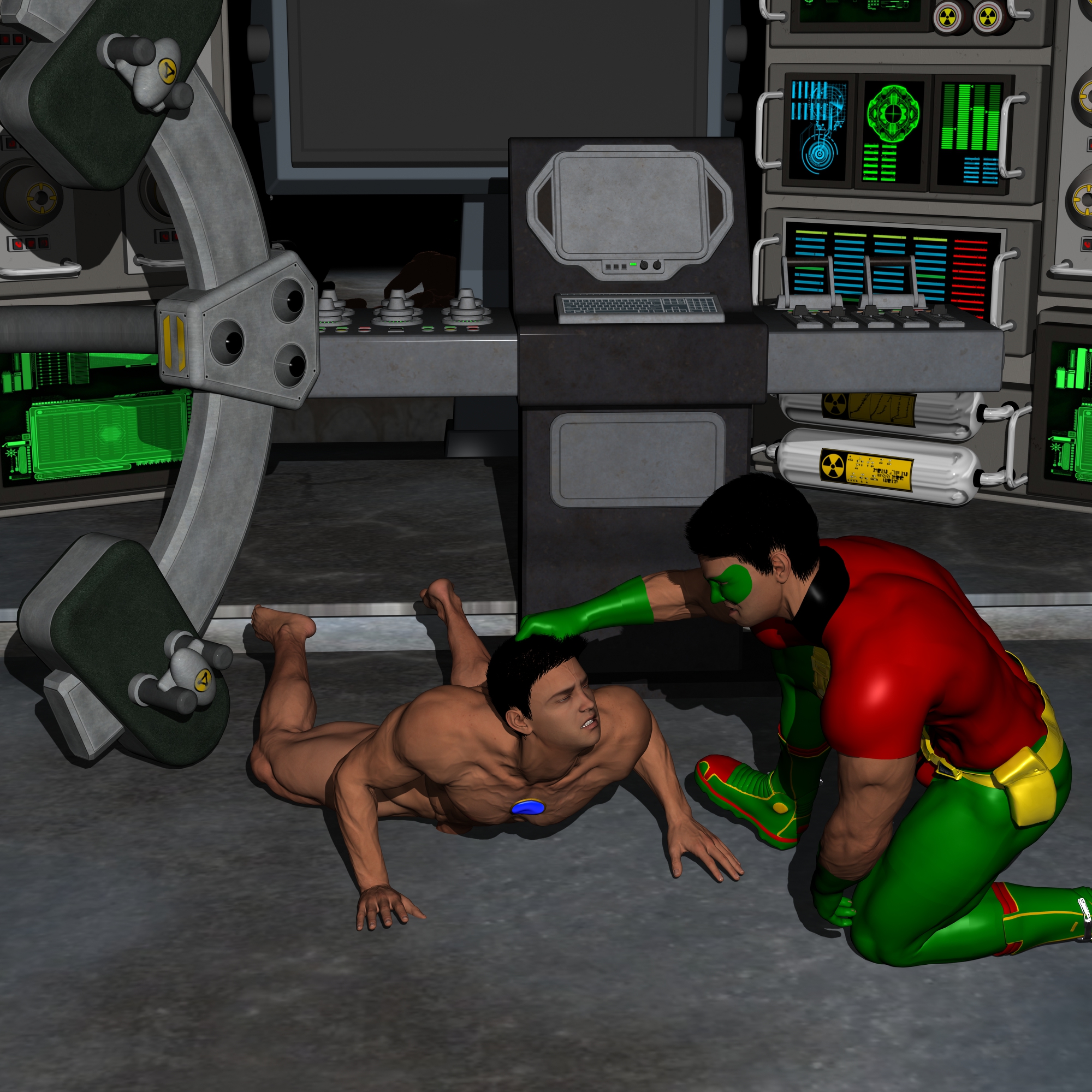 After leaving Robin writhing in pain for several minutes, the new Robin shut off whatever that was. Robin was barely conscious, but he could hear the new Robin when he grabbed him by the hair. "You pissed me off now. You no longer have a choice. That blue thing embedded in your chest is how I control you and own you. It cannot be removed and you might want think about it before you try something like that again, that was level one and there are seven of them, I would hate to think of the damage seven could do to you. He let go of Robin’s hair letting him fall face first to the floor.

Robin was helpless after being hit by that energy from the device embedded in his chest. He could barely move. Maybe he has screwed up by making his captor so angry, maybe he should have played along. If only he had not gone out alone and called Batman for help he would not be in this situation.