I would like to dedicate the following artwork to 'Etienne', aka  'Stephen', aka Dom Orejudos. A man whose work spawned countless torrid fantasies!
Herodotus 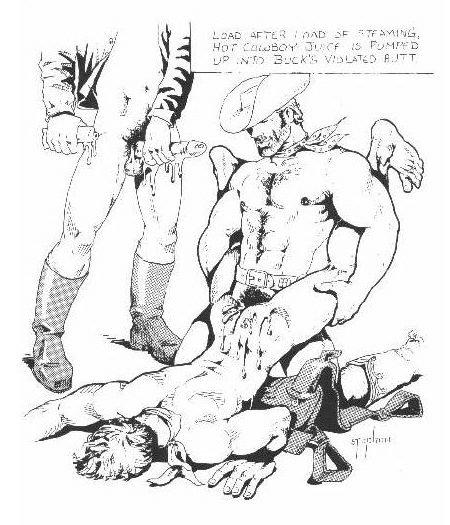 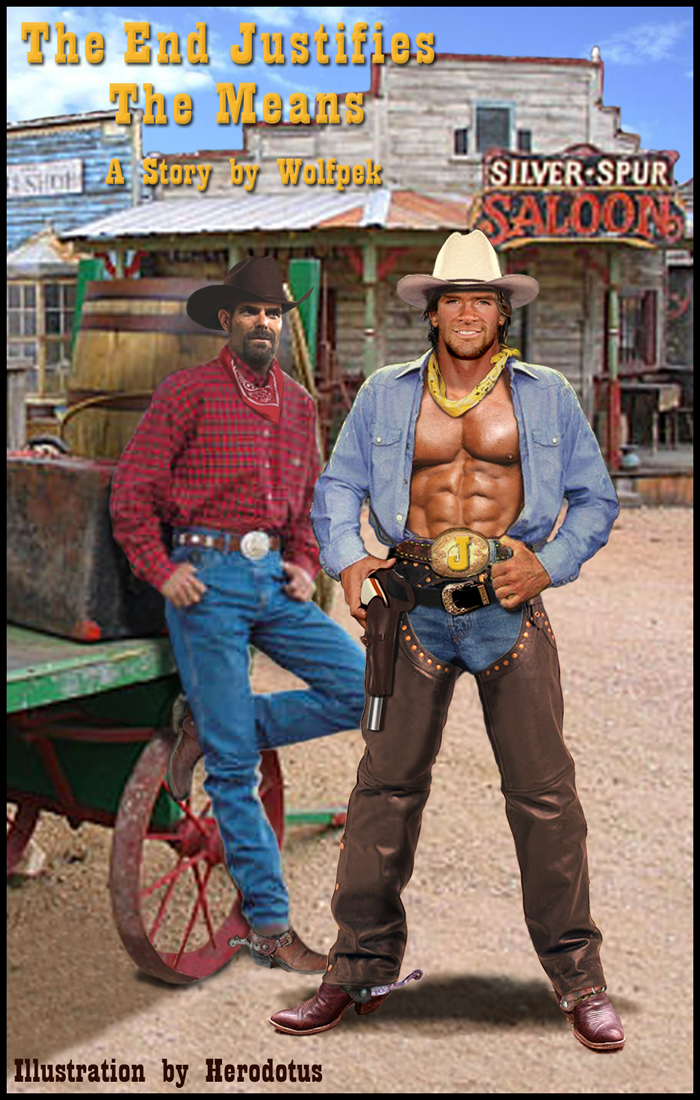 That's all I can say in my defense. I know some of you will judge me as a traitor, but I got that land for  the settlers with no bloodshed, and the railroad tracks laid.

So the end justifies the means.......and what an end it was

Framed as it was in that second skin of dusty tan britches, the day the plan was hatched

Jake  Cooper, was cleaning of a layer of sweat in the trough outside the bunkhouse

He had peeled off what was left of his shirt and water was running in rivulets over the granite plains of his pectoral shelf, the droplets lovingly counting the clearly defined abdominals as they were absorbed into the light dusting of hair that made up the treasure trail

The water had soaked  the thin fabric of his trousers to near transparency, an opaque second skin that flowed over every muscle, until it cascaded into his leather boots

If anyone of you could have seen the sun glistening off of those heroic muscles, or the transparent fabric hugging that rock solid bubble butt, and not done the exactly the same, then go ahead and judge me

Like I said, that end  more than justified my means

The poor stud never knew it until it was too late.

I hated that he out rode,  out shot, out drank, out charmed, and out-womanized every man in the territory, all with the shit eatin,,  humble, "aww shucks" grin on his full lips

I hated his fine, if distressed, leather boots

I hated the way people instinctively followed his lead

I hated the friendly way he slapped me on the back, after  he had bested and beat me at every turn, and  called me "pardner"

Most of all I hated his meaty round perfect ass,which tormented me day and night from the confines of the impossibly tight breeches

It burned into my dreams, every long feverish night, and he knew it.

For all of his supposed innocence, he flexed and swaggered in front of me at every chance, and without a hint of guile  rebuffed every subtle bunk house advance, without letting on he'd noticed.

I was so transfixed by the vision of his flawless glisteing form, I burned my hand on the campfire I had just started

I heard Jake guffaw, and nearly jumped out of my skin as his massive arm encircle my shoulders, his big paw mussled my hair.

The sheer power of the man's presence alone was overpowering,but his actual touch was almost more than I could stand.

I felt my face grow read hot, at the electricity of his touch, and my breath grow short as my shoulder met the hard curve of his broad chest. How could he, or anyone else in the county not hear the pounding of my lustful heart?

"You gotta keep on your toes. We gotta big job tomorrow. Gotta  pay a visit to ol' Chief Bear Paw"

I stared into steel blue eyes trying to understand. The chief had been an obstacle to claiming this land for years. Raiding settlements and attacking work crews, he had slowed the vital construction of the railroad to a near halt, and kept  terrorized settlers from developing land

The only progress made at all was because of Jake, the only man able  to keep the chief and his braves at bay. A merry little war had existed between them for years

The idea of Jake meeting with him without bloodshed was absurd.

"Governor's got a new plan."Jake explained."He wants the settlers in this year without any more bloodshed. to 'nee-go -she -ate', find out ole Bear Pappies price, see if we can coax him off the land. He reckons, I'm the only man can go talk to him and come back scalp and all. I need you to come along, and keep me from losin' my temper.

Member to keep your eye on him. He's got a bag o' tricks, watch the corners, and DON'T eat or drink anything he offers without he takes it first"

The friendly pat on my back almost left me face down in the dust.

"We ride out at dawn"

I had to admit, it was an honor he picked me to ride along with him. But I was plenty scared. Even with Jake around there was no tellin' what the ol' Injun was capable of.

This new tactic was a bit of a surprise. I had a bigger surprise , when I opened the door that night and saw the moonlight glinting off of a burly figure sitting on my bunk

There was an Injun in my cabin... and he had a plan.