It was a three day ride to the wilderness Bear paw had chosen for the parlay. Jake remained stoic and good humored  throughout, and with me mesmerized by the way his tight muscles stretched and settled into the saddle,as he rocked gently with the motion of the animal. With dry mouth I imagined the same motion in the throws of passion. I licked my lips and rode on

Something whizzed past my head. Before I knew it, Jake, rifle in hand, had pulled me off my horse, behind the cover of a rock against which a hail of arrows clattered and fell harmlessly. Jake had already picked of 6 or 7 of our attackers before I even knew that we were under assault, and had rushed out to meet the remaining three in hand to hand combat

The battle was fierce and lightening fast. The casualties numbered  three of the assailants, and Jake's shirt. His jeans were torn open exposing his hip and right thigh, and his nice boots spattered in blood

It was thrilling to watch this fighting machine in action, every muscle straining at peak performance, with precision, accuracy, and grace, as one by one, his opponents fell before him

He knelt among the fallen, ripping his trousers up a bit more. A teasing glimpse of gluteal curve  promised my hungry eyes that Jake had not bothered with underwear.Heedless of his tantalizing near naked state,  brows furrowed, his steel blue eyes narrowed in concentration

"These are disguised as Blackfoot, but it's pretty clear they are from Bear paw's clan. Shor'nuff he's up to something. You best stay close and follow my lead if you want out of this game alive"

We met the burly chief in the searing heat of midday. I had to admit, he cut an imposing figure, his body almost completely inked with aboriginal markings, and adorned with tribal talismans of  fur, feather, and bone

In spite of the midday heat, he was seated in front of a campfire with a boiling pot dangling above

Jake lashed is pearly whites as if meeting his best friend

"Howdy Bear Pappy! Thanks for sending out that welcoming party"

"Chief not know what you speak of Jake Cooper. Sit with me and we will speak of terms"

We sat cautiously across from the inscrutable, stone faced figure.

"First we drink together to show good faith. I have brewed tea"

"Ahhh now Bear Pappy, You really think we're gonna fall for that?Let's just name terms and be on our merry"

Jake watched carefully as Bear paw filled the cup from the cauldron and drank deeply. Whatever was in the, he wasn't bothered to drink it. He hand the cup to me.

I could hear my heart pounding in my own ears, but I knew this was no time to betray my emotions.Trying to hang on to my poker face. I took the cup from the shrewd injun', I met Jake's gaze. He looked concerned  but nodded. He hadn't cause to pull back yet

I took a strong swig. It was bitter, with a bit of bark, and whiskey, but tasted alright.

Jake searched into the chiefs eyes, as I covered the cup with my hand and handed it to our hero.

He locked eyes with his adversary, and downed the remaining liquid in one shot

I watched his adam's apple dance within the thick muscles of his neck as he consumed the tea. he wiped his lips on the fur of his forearm.

"There. We done what you asked and drunk your tea. Now I'm needin' your terms.

What do you want in exchange for that land?"

For the first time,a smile spread across the impassive face

Jake had already begun to sink backwards. His heavy lids sought the answer he already knew in my face

His head landed in the soft sand, and rolled slightly back and forth

Bear Paw was full out grinning now. He nodded at me. I was first that as was agreed when he gave me the powder to slip in the tea.

I advanced on the fallen figure. Shirtless, with ripped trousers, he was almost unwrapped for me already

I stroked his soft hair and let my hands explore every inch of the exposed flesh.

Struggling to wake from this unexpected nightmare, Jake' muscled undulated feebly, like waves moving up and down under my curious palms

I grabbed his meat. I could barely get my fingers around it. What ever the chief had cooked up, it sure was making him hard. I smiled to notice though, it still wasn't bigger than mine, as he would soon find out. I grabbed his jaw in my hand, and licked his face I looked into his drug addled eyes.

I stuffed my tongue down his throat, and kissed hard and long

The chief's men had done a good job getting me started. It didn't take much effort to rip away what was left of his clothes, leaving his boots alone, fondling and licking every new inch of exposed rock hard flesh as I went. he shuddered as I nuzzled into the vulnerable musk warmth of his armpits,and moaned as I suckled, and bit his tender brown nipples. Moans turn to shuddering short breathes as I kissed down the teasure trail that lay deep in the valley between heaving pectorals and rippling abs.

While I played with his upper body, I noticed Bear doing something to his cock.

At first I was angry that he was cutting in but realized he was tying a bit of leather tightly around the base, and balls.

I took him fully in my mouth. After these ministrations, it didn't take long to enjoy my first taste of his sweet seed.Jake exploded into my mouth and fell completely limp.

His eyes wandered over every flawless detail. He grunted with satisfaction, grabbed a handful of the soft hair matted against the ranger's sweaty brow and pulled our prey into a sitting position.

He lean down, and I heard Jake utter an almost in audible sigh as he shifted the weight of the unconscious muscle man over one shoulder, and stood up

"Come we have no much time until drug wear off"

What had my jealousy and lust driven me to?

Did I feel regret at this moment?  Did I experience even a twinge of guilt at my betrayal?

I stared at the best man among us. The only one strong and capable enough to protect the settlers from this ruthless chief and his fierce warriors, hanging naked and helpless like a piece of meat over the shoulder of his enemy.

That round dimpled ass, I had coveted for so long finally exposed, and held high like a trophy in the lascivious clutches of the adversary he had defeated so many times

and it had no regrets

Only one overpowering need. 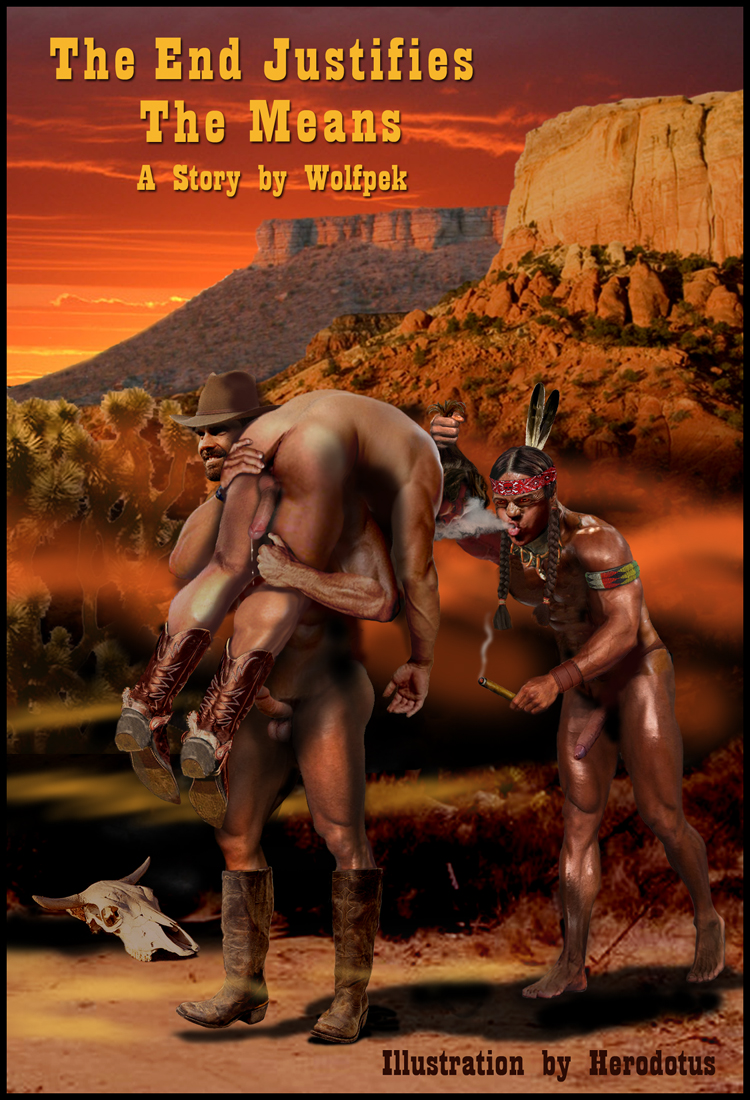 I followed Bear Paw and his beautiful burden further into the wood enjoying the complicated pattern of muscles in his inverted V-shaped back, play had shift has he swayed softly with emotion of his captor's stride

Finally we came to a flat stone,, and Bear paw gently laid his prize face down, and turned to me.

"We make deal. You take first."

He pulled Jake's arms above his head and bound his wrists tightly, as I began to play with the rest

I placed both hands on the soft leather covering his heels. Like a blind man reading braille, I let them wander up his boots squeezing at the calves as I went. His legs so thick and powerful. Following my palms with my nose and tongue, I worked my way up the naked thighs until I reached my goal.  Breathless, I ran both hands on those rock hard cheeks , around and around with increasing intensity, kneading into the soft cool granite muscles. I reached underneath and pulled his stiff cock out between is spread legs, I kissed the head, and licked the shaft, I took both balls in my mouth. I spread the cheeks wide and dove in with my nose and tongue. I breathed him in deeply, and danced along the rim. My tongue darted inward. I became aware that Jake had begun to moan from somewhere deep in his dreams. Answering his moans, I pulled out and ran my face along the curves of his ass. I bit hard into one cheek. The Chief objected

"No make mark on Bear paw property. No bite"

The light was growing dim, and the air cooler. The chief had begun to build a fire to illuminate and warm our naked captive

I reluctantly complied, and began to kiss my way up his spine, until I reached his neck, and lay fully along his massive back pressing my raging need into his deep cleft.

I admired the muscled architecture of his wide shoulders, and graceful neck.How deceptively vulnerable they looked beneath me with arms bound.

His shining hero  whom I had so envied was mine. A toy defenseless against my cruelest whim

I pushed his powerful legs further apart with my knee and pressed the head of my cock against his virgin hole. he was impossibly tight. I wasn't sure I'd be able to get in

I kissed his neck. He stirred, he was beginning to come to

I bit into his ear, and whispered so far  in, I could feel my breathe tickling the hairs in his ear canal

"I know. That makes raping your fine ass all the sweeter..pardner"

The tight ring of defensive muscle lost the battle to my invading need, and I slid in, more quickly than I should have

I've been blessed with more inches than most have, and have had to be gentle in the past.

This should have split him in two.

But our hero wasn' t going  to give me that satisfaction.  He was too much of a man. He threw his head back and grimaced, a violent growl escaped between his clenched teeth, every muscle tightened. It felt so good around my cock, and the every muscle released. The pain was too much even for Jake, and he fell into a deep swoon

I had wanted complete revenge. I had wanted to destroy him. Make him my bitch, and rob him of this manhood. But as I looked at the perfect bound body I thrust into,a and the serenity of the sleeping face, I saw a nobility of spirit even my cock couldn't reach. I thrust harder and harder. My hands frantically covering his face and clawing at his tits. I wanted to hurt him, to punish him for his beauty. He had asked for this, taunting me with his tight breeches, flaunting his naked torso around the bunkhouse.As his limp, bound, body bounced with every increasingly violent thrust, he became more, more and more the suffering hero. Captured, but never defeated

I exploded into him, and collapsed exhausted and un-triumphant upon his sweat slicked back

I realized it was night, and the chief was waiting his turn.

He forced  a little more tea down Jake's throat to keep the fight out of him, while he un tied and re bound his victim into a variety of interesting positions 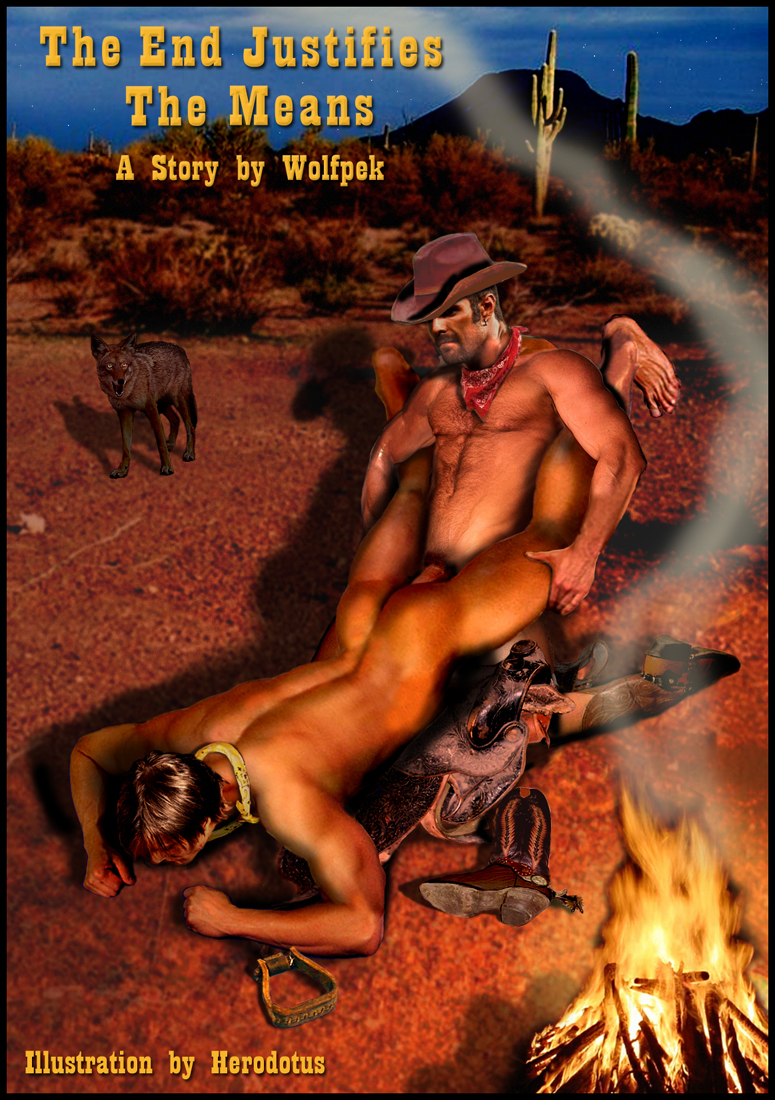